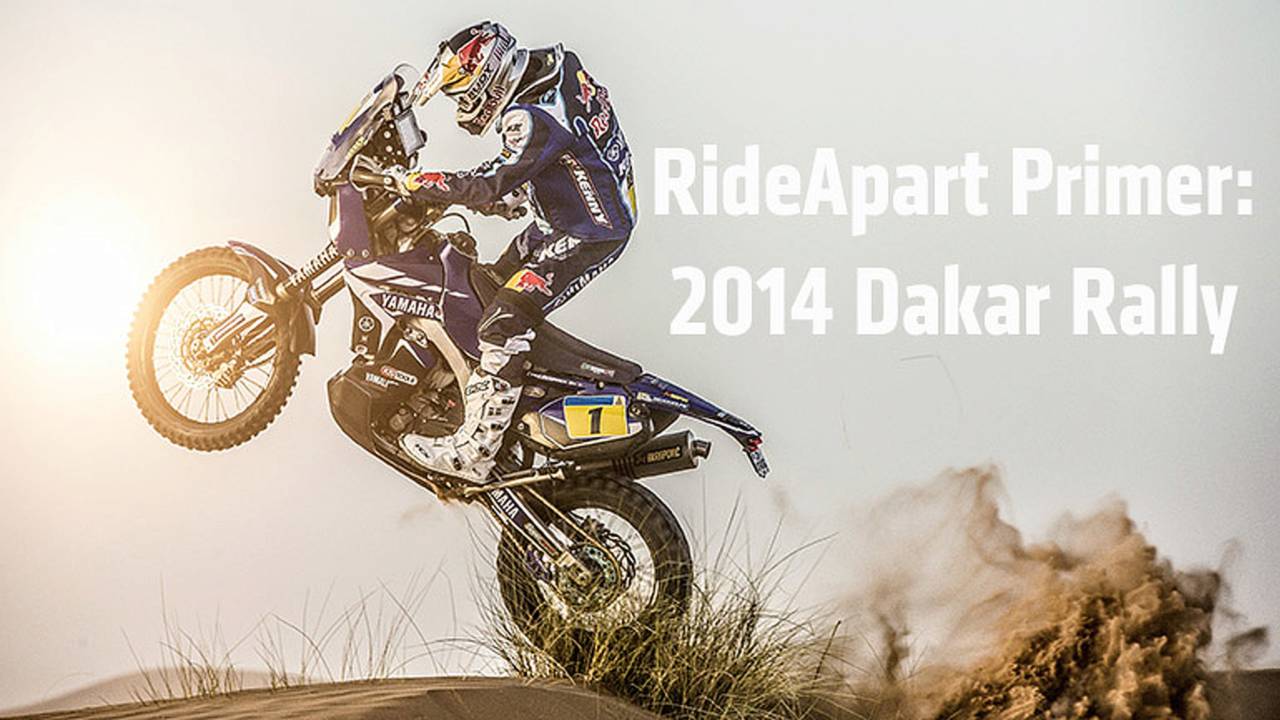 A RideApart primer to the 2014 Dakar Rally. Who's racing, what motorcycles are they riding, and who's going to win? We give you the inside scoop.

13 days of racing covering over 3,000 miles of the toughest off-road racing in the world. The Dakar returns to South America this year, with the race starting in Argentina this Sunday, passing through Bolivia and finishing in Chile on January 18, 2014. Here’s what you need to know, what you can expect and how to watch the epic 2014 Dakar Rally.

This is the most exciting thing about Dakar 2014 — more factory motorcycle teams are racing now than any time since the 1980s. 12-time consecutive champion KTM will be present, of course, joined by Honda, which re-entered the race last year. But, this year also marks the return of Yamaha, who’ve hired five-time winner Cyril Despres.

This should excite history buffs: The only person who’s won the Dakar more times than Despres is fellow Frenchman Stéphane Peterhansel, who rode a Yamaha to victory six times during the 1990s.

Mike Johnson, of El Paso, Texas is the only American rider competing this year.

The only American racing a motorcycle this year is Mike Johnson, an engineer from Texas. He’ll be riding a CRF450X for satellite team HT Honda Rally Raid and his goal is simply to finish the arduous race.

Where Are They Going?

After struggling to stay on its historic pan-African route due to security concerns — regional conflicts saw landmines strewn across the course, among many other serious issues — The Dakar moved to South America in 2009. Governments there have rolled out the welcome wagon for the race, which pumps millions of tourist dollars into local economies each year.

The 2014 Dakar will see motorcycles ride through Bolivia for the first time.

The route this year skips Peru in favor of Bolivia, where the rally’s organizers will attempt a new strategy which will see bikes and cars run separate “Marathon” stages on different routes. The idea is to increase safety — bikes start ahead of the faster, more expensive cars, and are then passed at speed by multiple vehicles, often in low-visibility conditions — while allowing the unique abilities of each vehicle type to shine. The bikes will take to a more challenging single-track in the Bolivian Andes, while the cars will run at high-speed across Argentina’s sand dunes.

This year’s race concludes in the historic Chilean port of Valparaiso.

What Are They Riding?

While the original Dakar rally may have been responsible for the inception of the modern Adventure Touring motorcycle, the bikes they race nowadays are much smaller. Essentially beefed-up enduro bikes, they’re restricted to 450cc in capacity and carry long-range fuel tanks, navigation and communication equipment as well as onboard tool kits — riders are expected to be able to perform emergency repairs along the route.

The 2014 KTM 450 Rally is all new and uses both saddle fuel tanks and an under seat auxiliary tank. Check out the clear strip running through each, giving riders and mechanics an immediate visual reading of fuel levels.

The KTM 450 Rally has dominated the race since it went 450cc, nevertheless, this year’s machine is all new. Starting with the firm’s signature steel trellis frame (look how huge that is!) and a unique version of its four-stroke 450 race motor, the Rally is equipped with twin, saddle-style fuel tanks on each side and a third, auxiliary tank under the seat. Riders can select which tanks the fuel is drawn from, allowing them to alter the weight distribution front-to-rear throughout each stage. The hefty carbon front subframe carries the lights, as well as the navigation and communications equipment. Competitors navigate via a traditional route book, while a beacon alerts them when they near a waypoint. No GPS navigation here. An onboard alarm also goes off when one of the faster cars is about to pass.

Despres' Yamaha is less trick, but is based on a motocross racers, so should be even more nimble than the KTM.

Built by Yamaha France, Cyril Despres’s YZ450F promises to be very competitive. Based around the company’s flagship motocross racer, the bike features a rearward-slanted cylinder to boost mass centralization.

Build by HRC, the CRF450 Rally could give KTM a run for its money.

The Honda CRF450 Rally is a full factory effort built by HRC. Based on the CRF450X, it’s been upgraded with bespoke suspension geometry, and additional fuel tanks low down on each side of the engine. It finished 7th and 8th last year, during its first Dakar. Expect to see a stronger showing this time around.

A typical Dakar scene. Why would anyone not want to watch this on TV?

How Do You Watch It?

If you live elsewhere in the world, just tune your television to one of your regular sports channels; the race receives massive coverage in Europe and South America. In the U.S., you aren’t as lucky. The rally’s YouTube page publishes a short recap each day, with some of the best action. That’s a good place to start, but if you’re really in need of a strong Dakar fix, you’re going to have a go a little legally grey. The ADVRider forum is a great resource for torrents of foreign Dakar coverage; you can find the relevant thread here.

Want to check in on the go? Download the 2014 Dakar app for your smartphone.

Get behind another racer and this is all you'll see, for miles on end.

There’s a lot more variables at play than simply best rider and fastest bike. With 13 days of racing through harsh terrain and changeable weather, luck plays a huge role too. Despite his unproven bike, my money is on Cyril Despres. He’s proven he has the metal to win time and again and Yamaha France has both the technical ability and motivation to build a winning machine. The fastest man in the race wouldn’t have signed with the team if he didn’t think he’d have a solid chance to win.

Still, the safe money, of course, is on KTM. With three victories under his belt, Marc Coma is the second most successful Dakar racer entering this year. In 2011, Coma even beat Despres in a fair fight.

Who's your favorite in the Despres/Coma, Yamaha/KTM battle? Do you think Honda's in with a chance? And, how do you follow the race? Tell us in comments below.