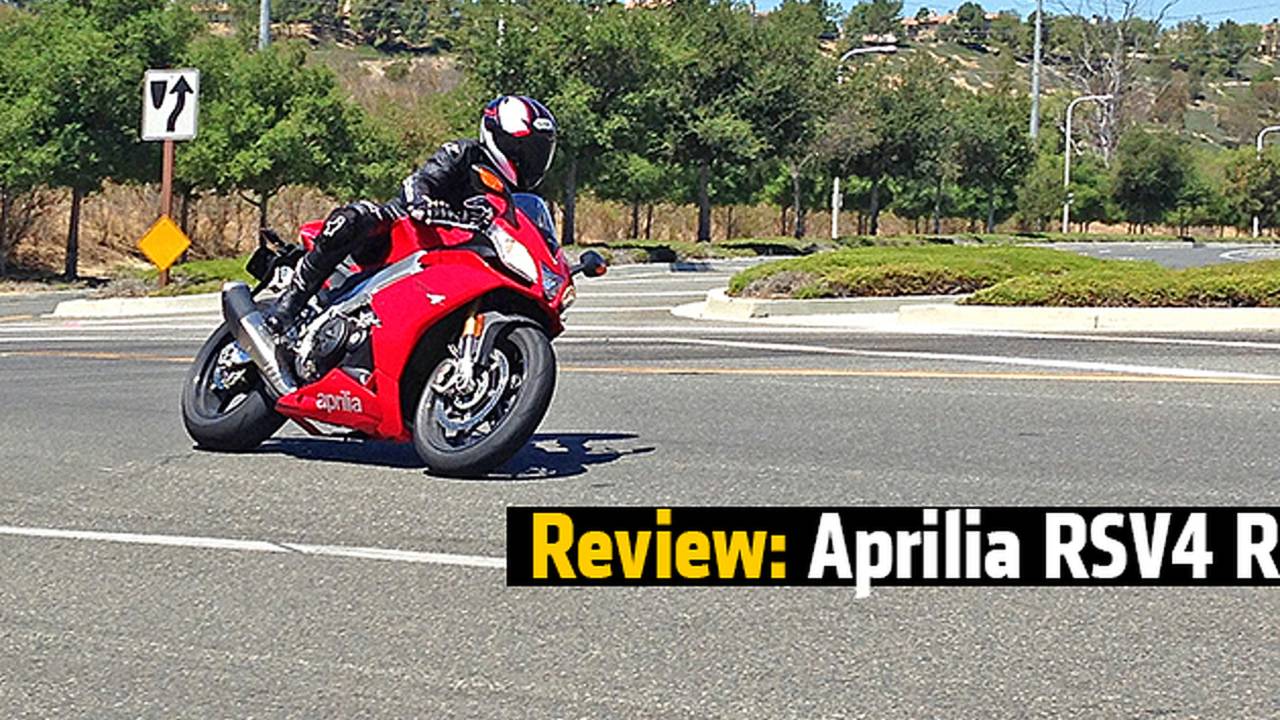 We review the Aprilia RSV4 R.

There’s something to be said for a sportbike that makes no secrets about its purpose in life. From minimalist bodywork to an 8-stage traction control system, everything about the Aprilia RSV4 R – aside from the obligatory FMVSS bits – adheres to a singular philosophy: race-ready out of the box. But, like most civilian race bikes, the RSV4 R has a one-track-mind, meaning lengthy strolls through town will likely end with a visit to your local chiropractor. Then again, this anti-street demeanor makes for an on-track experience unlike anything currently offered in the mainstream marketplace.

If you’ve been on the fence about committing to a V4, this could be the bike that turns the tide. Churning out wave after wave of ferocious-yet-usable power to an unmistakable baritone concerto, Aprilia’s 999cc, 65-degree V4 commandeers your temporal lobe and overwrites past memories of inline-4s. An almost-overabundance of low-end torque ensures there’s sufficient power on tap in the event of a miss-shift.

That’s not to say the RSV4 R is a handful around town, either. Even riders whose throttle control resembles that of a light switch will find the Aprilia willing to oblige tight parking lots and congested roadways with the manageability of a middleweight.

With but a light flick of an ankle, the standard quick shifter slices its way through gears with a surgeon’s precision. Pucker power is more than plentiful thanks to massive Brembo front brakes comprised of 320mm rotors, four 30mm pistons, and a braided line. The front brakes are also remarkably easy to modulate, affording linear, predictable one-finger braking aided by a 3-mode ABS program (rain, sport, and track). Ignition mapping offers a rain, sport, and track setting as well, with the sport mode serving up the best balance between throttle response and roll on traction. And so long as we’re on the topic of performance electronics, the RSV4 R’s 8-stage traction control system is, in our opinion, the finest such unit available on a production bike.

Though it employs much of the same technology found in its BMW and Ducati competitors, Aprilia’s performance ride control (APRC) receives highest praise for its brilliant execution. Small aluminum paddles located on the left handlebar allow for on-the-fly adjustments regardless of throttle position. And, as any avid track rider will tell you, transparency is the key differentiator between a good traction control system and a great one. In the case of APRC, we found it nearly impossible to determine when and if the system was kicking in due to the seamless manner in which it intervened.

Another handy component of the APRC framework is wheelie control, which includes three modes for controlling the desired longitudinal acceleration limits of the bike. Unlike traction control, however, altering wheelie control requires sifting through a few pages of on-screen menus.

Last and certainly least, there’s a launch control function to appease aspiring Vin Diesel types. Working in conjunction with the traction and wheelie control systems, launch control allows the user to focus solely on releasing the clutch during standing starts. Admittedly, the system’s well-calibrated algorithms do indeed produce some rousing launches, but more experienced riders will probably use the horn more often than launch control.

Ergonomics are, as expected, quite aggressive. But if the majority of seat time is spent in the realm for which the RSV4 R was intended (hint, hint: the racetrack), these uncompromising ergos should begin to make sense. Locking in to the fuel tank’s deeply sculpted cutouts instills a high degree tactile security during extreme lean angles, while low, swept-back bars combined with a raised saddle continually promote the optimal riding position.

Quick changes of direction required a bit more effort than the supremely agile S1000RR and Ducati Panigale, though overall responsiveness closely matched that of the Yamaha R1 and Honda CBR1000RR.

The most remarkable aspect of the Aprilia RSV4 R doesn’t boil down to a particular feature, but rather the harmonious way in which the electronics, drivetrain, chassis, suspension, and brakes work together to form one of the most well-sorted packages this side of an 1199 Pinagle R. To put it another way, the RSV4 R wholly exemplifies the old epithet: you wouldn’t understand until you ride it.

That said, there are additional performance attributes deserving of special attention. First and foremost is the impressively sure-footed composure exhibited at speeds in excess of 130 mph. Likewise, the original Sachs suspension setup behaved in such a compliant fashion both on and off the track that stepping up to the Ohlins-equipped RSV4 Factory edition seemed for all intents and purposes a superfluous proposition.

For a modern superbike infused with leading edge technologies, the fact that Aprilia felt it unnecessary to incorporate a proper fuel gauge is nothing short of a head scratcher. Still, despite mandatory mileage tracking, an excess of radiant heat from both sides of the motorcycle, and mirrors that do nothing more than ward off fix-it tickets, no one in their right mind would deem these minor shortcomings as deal breakers.

Then again, the BMW S1000RR equipped with ABS and traction control shares a nearly identical starting price with the Aprilia, while the majority of similarly-equipped Japanese liter bikes undercut both the S1000RR and RSV4 R by roughly $500.

By blending pure race-inspired performance into a reasonably affordable package, it wouldn’t be a stretch to say Aprilia has a winner on its hands with the latest RSV4 R. At the end of the day, a premium sport bike should stimulate all tangible and intangible sensory inputs, and RSV4 R is among the few bikes available to consistently deliver a high level of each.

Experience: Motocross since age 13/street at 17