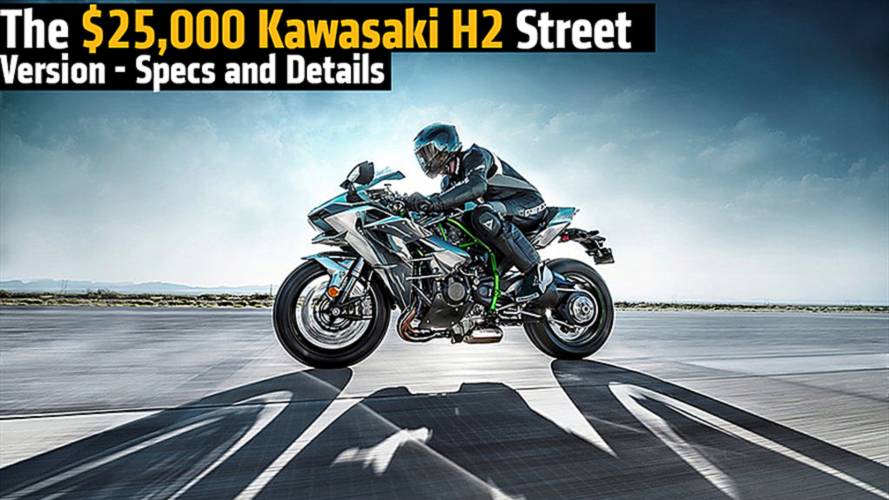 The 200hp Kawasaki H2 Street Version - Specs and Details Here it is, the menacing street brother to the Kawasaki H2R - the H2. A watered down...

Here it is, the menacing street brother to the Kawasaki H2R - the H2. A watered down version of the track-only H2R, it’ll still be one of the baddest street bikes on the road. The question remains, how close is it to its big brother and how easily can it make the same power?

First up, the important stuff: horsepower, but that won’t come easy; as with everything Kawasaki does, it's covered in secrecy and teasers. Today, we don’t see exact horsepower figures from the 26 page-long press release on the bike. The H2R makes 300hp, in case you already didn't know, thanks to supercharged 998cc's.

This engine is practically identical to the H2R, but with different head gasket, exhaust and cam profiles, and we’re sure a more mild tune with less boost. The supercharger seems to be (but not confirmed) identical to the H2R, which begs the question: with simple tuning can you make 300hp out of the H2? That’s what we’ve been hoping for. We'd still guess the H2 makes north of 220hp.

The 45mm diameter stainless-steel exhaust is tuned separately for the H2, since it has a different torque range and mufflers. It sounds like the supercharger was tuned back and other items (notably cam profile and exhaust) were adjusted to make a for a smoother torque curve.

The only other notable difference between the two drivetrain packages is the clutch, as both bikes will have the same dog-ring transmission.

The H2 engine makes 8.5:1 compression and we can only assume that’s the same for the H2R. Some information not yet revealed on the H2R is shown at this unveiling, while some remains a mystery, like power. Come on Kawasaki, we need to know!

Since we don’t know the specs of the H2R’s supercharger configuration and boost levels for sure, we can’t make assessments as to the H2’s power. The H2’s propeller like the H2R is a 5-axis CNC milled gear that spins at 130,000 rpm when the bike reaches its 14,000 rpm redline. The supercharger will produce 35 psi pressure at redline .

It hits the scales with a curb weight of 524.7 pounds and will sell for $25,000; we were hoping the street version came in right under $30,000. The overall length is 82 inches with a 32.5 inch seat height. That's expensive for a sport bike, but with the level of exclusivity and performance you get with the H2, it's cheap.

It’s a one seater with no room for a friend on or off the track. According to Kawasaki its “rider triangle is similar to that of the Ninja® ZX™-10R motorcycle, but more relaxed.” Like the H2R, it has hip supporting pads that flank the rear of the seat and feature 15mm of adjustment.

The tach will have an actual needle, with a black face that changes color as rpm increases. Beside the tach is the fully digital LCD screen that uses an analog-style tach as well. The screen uses white letters on a black background.

The Kawasaki Engine Braking Control is exactly how it sounds; adjust the setting and the engine braking will be reduced when you let off the throttle.

While the bike doesn’t have electronically-aided Ohlins suspension like the R1, it does have an electronic steering dampener.

The intelligent anti-lock brakes work both brakes when needed and provide: rear lift suppression, minimal kickback during operation and accounts for back-torque, according to Kawasaki.

The Kawasaki Traction Control offers three modes of intrusion, with three adjustable points within those settings, allowing for nine possible combinations. The biggest limiter is Rain Mode, which cuts power down to 50 percent... for when you let the valet park it.

THe H2 will feature the same suspension as the H2R, KYB® AOS-II racing suspension. The 43mm forks are based on the Air-Oil Separate cartridge fork that was originally developed for motocross racing.

Out back are fully adjustable KYB components mounted into the Uni-Trak® linkage that offers good grip; the upper mount mounts to the swing arm eliminating the need for a crossmember.

You've probably been looking at the bike to try and figure out the color. The H2 is so tech heavy even the paint is called "High-Tech." It's a Mirror Coated Black designed by Kawasaki just for the H2. It has a high level of accuracy around it and while it's all shot robotically it's finished by hand.

According to Kawasaki, “In the shade, the paint appears black, but once in the sunlight its highly reflective surface takes on the appearance of the surrounding scenery. The stark difference in the way the paint appears in the light and shade emphasizes the beautiful curvature of the bike’s sculpted bodywork.”

Again Kawasaki won’t give us all the specs we so desire, but they will give us enough to be happy for now. We’re anxious to see what kind of power this bike will make showroom stock and the final boost levels of the H2R, as they’re sure to be astronomical.