RideApart's Most Popular Stories of 2014 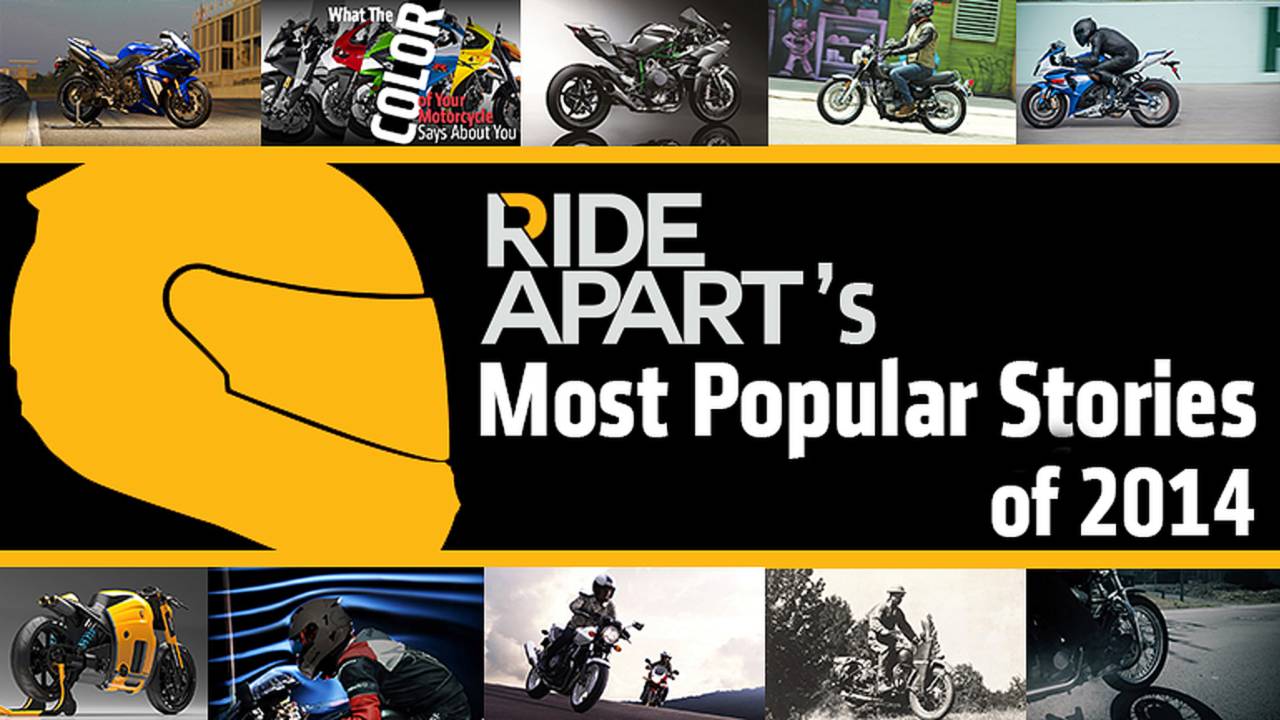 We covered a lot of news over the past year. Here's RideApart's most popular stories of 2014.

Records fallen, all-new models introduced and some have returned, 2014 has been a whirlwind year in motorcycling. Sales figures are up (depending on who you ask), more new riders are coming into the marketplace and we've seen the emergence of all-new segments and the return of some old favorites. Whether it's your new favorite hipster bike, one that can do it all, or one that’s finally for sale in the US, 2014 has been a significant year for motorcycles and motorcycling. Here at our small corner of the motorcycling world, we've brought you a ton of riding news and stories throughout the year. So we compiled the most viewed stories and bring you RideApart's most popular stories of 2014.

#5 The Most Desirable Motorcycles Not Sold in the USA

The Yamaha SR400 was originally a 500cc bike way back when, but only sold for three years here in the US, starting in 1979. Yamaha continued to sell the bike overseas in the 400cc configuration, and finally got around to shipping it here for 2014. An awesomely fun bike, it’s only drawback being it’s overpriced for a small-cc, kick-start-only, thumper, at $5,990. Read our 2014 Yamaha SR400 Review here.

The Kawasaki Versys 1000 has finally made its way here as more of the European Adventure style bikes (like the Yamaha FJ-09) are being sold in the USA. News came at EICMA this year and Kawasaki recently had an overseas launch of the new bike. We’re anxiously awaiting our own test ride.

What makes a motorcycle helmet quiet and how can you find the perfect one for you, these are some age-old questions for any rider (except for maybe the Sturgis-crowd who prefer a novelty half helmet).

We examined the little things you may have normally overlooked, like the importance of a windjammer, and then listed our favorites, like some Shoei and Schuberth options. Look for an updated article in 2015 as we’ve recently had experience with quiet Arai and Bell brand helmets.

#3 What The Color of Your Motorcycle Says About You

“Colors,” said Pablo Picasso, “like features, follow the changes of the emotions.” Whether it be the absence of color, black, (which has been statistically found to be in more accidents) or white, the absorption of all colors, we examined why you may have picked one bike over another.

One of the biggest indications as to the impact of this news, to me personally, was when my former boss at Hot Rod magazine (who has no interest in motorcycling) was excited to report on the motorcycle engineering achievement of the year: a major manufacturer producing 300hp out of a liter engine. The mean green Kawasaki will surely be a hot topic as we enter 2015, with no official word as to when we’ll be able to ride one.

Writing this post at 2am apparently was for the best, as the bike was released at the EICMA show in Italy early in the morning; the post still left people guessing as to the actual performance of the bike and the H2R, which followed shortly.

Kawasaki's amazing, long winded, teasing marketing campaign - with its long list of teaser videos hinting at something big - didn’t disappoint. Now, while you may not want a liter bike, you may make an exception for this Kawi.

#1 Why You Don’t Want a Liter Bike

They make you a target for thieves and police, and sometimes being on the razor edge of speed and crashing isn’t the best place to ride. We broke one of the most common misconceptions and debated issues in the sportbike community: the idea that a 600 is a starter and a 1,000 is for grown ups.

Published back in January, 2014, we laid out 11 reasons why literbikes are overrated - and why they're too much bike for most riders to handle safely. This post evoked a huge discussion from our readers, resulting in possibly the highest number of comments we've had on a story this year.

These were our most popular stories for 2014. What would you like to see more of at RideApart in 2015? Tell us in the comments - and have a Happy New Year!