11 Reasons Why You Don’t Want A Literbike 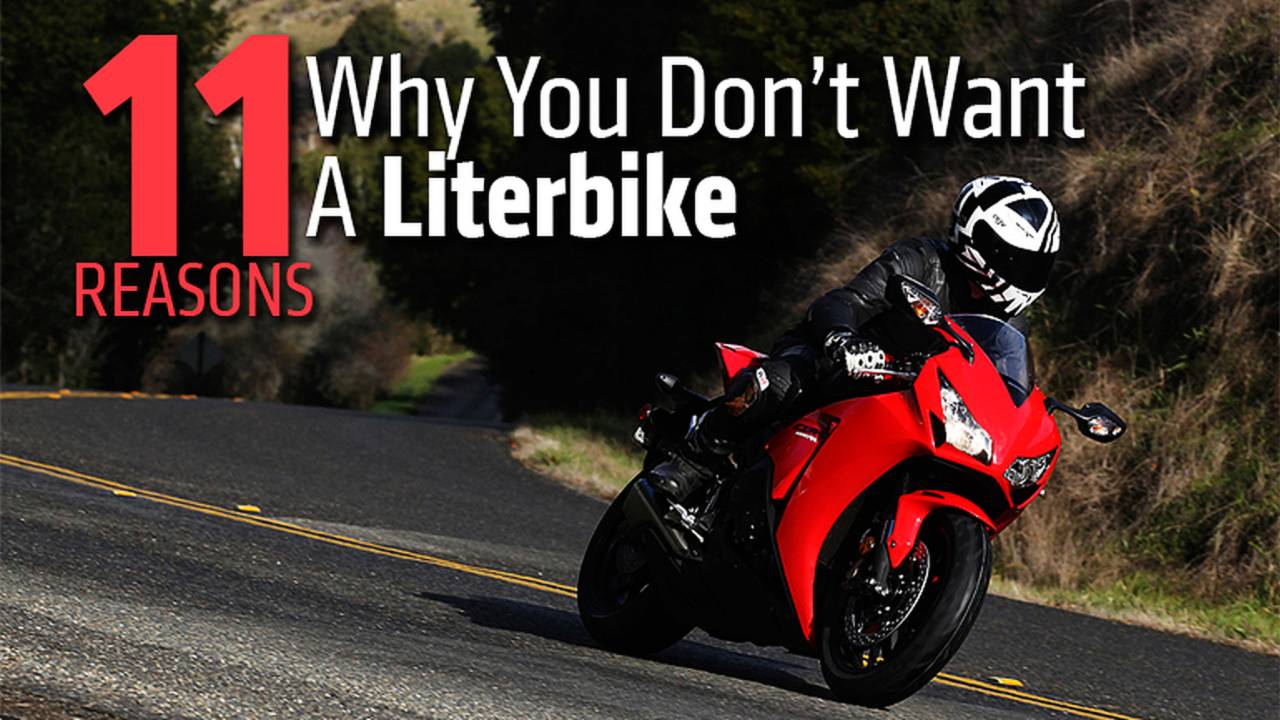 Literbikes are the fastest vehicles on the road. But they aren’t all they’re cracked up to be, here’s 11 reasons why you don’t want a literbike.

Literbikes are the fastest accelerating vehicles on the road. Why buy a Porsche for $150,000 when one of these is faster for $15,000? Yeah, no. R1s, RSV4s, GSX-Rs, CBRs and Panigales aren’t all they’re cracked up to be, here’s 11 reasons why you don’t want a literbike. Really.

Literbikes, superbikes, 1200cc V-twins — whatever you want to call them — are about one thing: horsepower. When I bought my first one a decade or so ago, it made 118 bhp and that felt like a rocket ship. Today’s bikes are closing in on 200 bhp at the crank and are now topping out at over 200 mph.

With that massive increase in power has come all sorts of technological development designed to tame it. Semi-active suspension, traction control, wheelie control, launch control; it’s all designed to turn an unrideable power-to-weight ratio into something that might not kill you. Maybe.

This horsepower war is fuelled by racing, of course, but also got kicked-off last decade as the industry chased its ever more-mature audience, giving them reasons to upgrade their bike every few years or to switch brands in pursuit of the latest and greatest. Trouble is, in the process, the bikes have almost ruled themselves out of relevancy. Here’s why.

2) Literbikes Make You A Lazy Rider

Out riding with your buddies? Doing a track day? On a literbike, all of a sudden you don’t have to try terribly hard. Want to close a gap? Just open the throttle and unleash the four horsemen of the accelerative apocalypse. Hell, they’re so fast that you don’t even need to shift down a gear or fully open the throttle, typically 20 percent or so of the twist grip will do. Where’s the fun in that?

See that news story about the CHP busting a huge motorcycle theft ring in Los Angeles and recovering hundreds upon hundreds of stolen bikes? Watching it, you could literally sit there and go, “literbike, literbike, literbike, literbike.” There wasn’t anything else. Riding one around town, you have to carry a heavy chain, a disc lock alarm and secure the bike both to an immovable object and by both wheels ­— every time you stop. They get stolen from locked garages, luxury condo buildings, secure trailers and in broad daylight. The latest generation of thieves have even begun bike-jacking them, waiting until you’re stopped a red light, then knocking you off and taking your pride and joy.

To put down 180 bhp or more, the latest generation of tires has had to become incredibly specific. They work pretty well in the dry, so long as you take the time to heat them up, but the wet and cold? Just look at the incredibly minimal sipes for evidence of how that’s going to turn out.  All that electronic trickery has been developed for a reason, too. The bikes have become virtually unrideable without its help. On anything but a track or dry, warm mountain road, you’ll need to turn down the throttle response and outright power output, turn up the TC and wheelie control, then still ride the bike on virtual tip toes. Any lapse in attention could cause a crash.

In the real world, on real tracks and real roads, cheaper, more exploitable, more manageable 600s are just as fast. I mean come on, your bike might be theoretically capable of 186 mph, but when’s the last time you took it over 120? A 600 will hit 170 mph and get there 95 percent as quickly. Outright lap times on the track are a hair’s width apart. So why bother?

6) Literbikes Make You A Target

Rolling around on a loud, flashy literbike isn’t exactly a low-key thing to do. Everyone will turn and look, everyone will know you’re up to no good. That includes the cops — who disproportionately target literbike riders and tend to write them harsher tickets — and other riders, to whom passing you becomes something of a trophy. Is there anything worse than being that guy at a track day on the fastest bike there, getting passed by some 16-year old on a 250?

7) Literbikes Cost Too Much To Run

The latest generation of 200-section performance tires cost about $300 a set. And you’ll need new ones every 2,000 miles. That’s once a month if you’re riding every weekend during the summer. Figure in service costs for ever-higher performance motors living in ever-more complex bikes, suspension that now needs to be rebuilt when the valves are adjusted (TTX36, anyone?) and chains and sprockets every other tire change. It really does add up. And that’s before you factor in any damage or the sky-high insurance premiums.

Make no mistake, these are not race bikes for the road. Race bikes have tall windscreens and custom ergonomics tailored to the individual racers, who are sized like horse jockeys and are 20-years-old. You’re not 20 anymore and you’re likely much taller than 5’2”.  But, literbikes still aren’t built for average-sized men. I don’t think they’re built for humans at all. Showroom fashion dictates tiny screens, paper-thin seats, insanely high pegs and clip-ons so low you’ll feel like you’re gripping the front axle. One of the major advances touted by the Panigale is its first-for-a-Ducati “traditional” sportbike ergonomics. That means you can actually ride it, but doing so for more than 20 minutes will still leave you with back spasms and numb hands.

In pursuit of that outright, headline power figure and not immediately killing their customers with it, literbikes go through all sorts of changes that are designed to manage the power, but compromise handling in the process. Reference the Panigales, 1199 and 899 for a perfect example. The bigger bike requires a longer wheelbase and more conservative steering geometry designed to improve stability, but which make it slower to turn. The 1199 is also fitted with a 200-section rear tire to the 899’s narrower, steeper 180. Again, that blunts steering response and speed. The result? Journalists on the 899’s launch unanimously preferred riding the smaller bike, describing its overall experience as “sweeter.”

10) Literbikes Don’t Teach You Anything

If you’re one of those idiots that bought a literbike before first becoming a total riding expert, then all you’ve learned in the process is how not to kill yourself. All your efforts, every ride, simply go into managing the power. You’re not learning squat about riding and as a result, you don’t know how to ride well, you simply know how to transport yourself from A to B on your overcompensation machine in some semblance of safety. Sorry, but that’s the harsh truth and it’s limiting your outright enjoyment of this sport.

When I rode the Ducati 1199 Panigale R down at COTA, I hit 202 mph and got the chance to experience that track before even most MotoGP riders. How did I feel at the end of the day? Lucky to be alive; the experience was absolutely terrifying. Contrast that with riding the Ducati 899 Panigale at Imola in the pouring rain. I actually had fun. I was able to get on the throttle — hard — drag knee in the wet and you know, actually ride the bike rather than just manage the power.

Do you ride a literbike? Why?