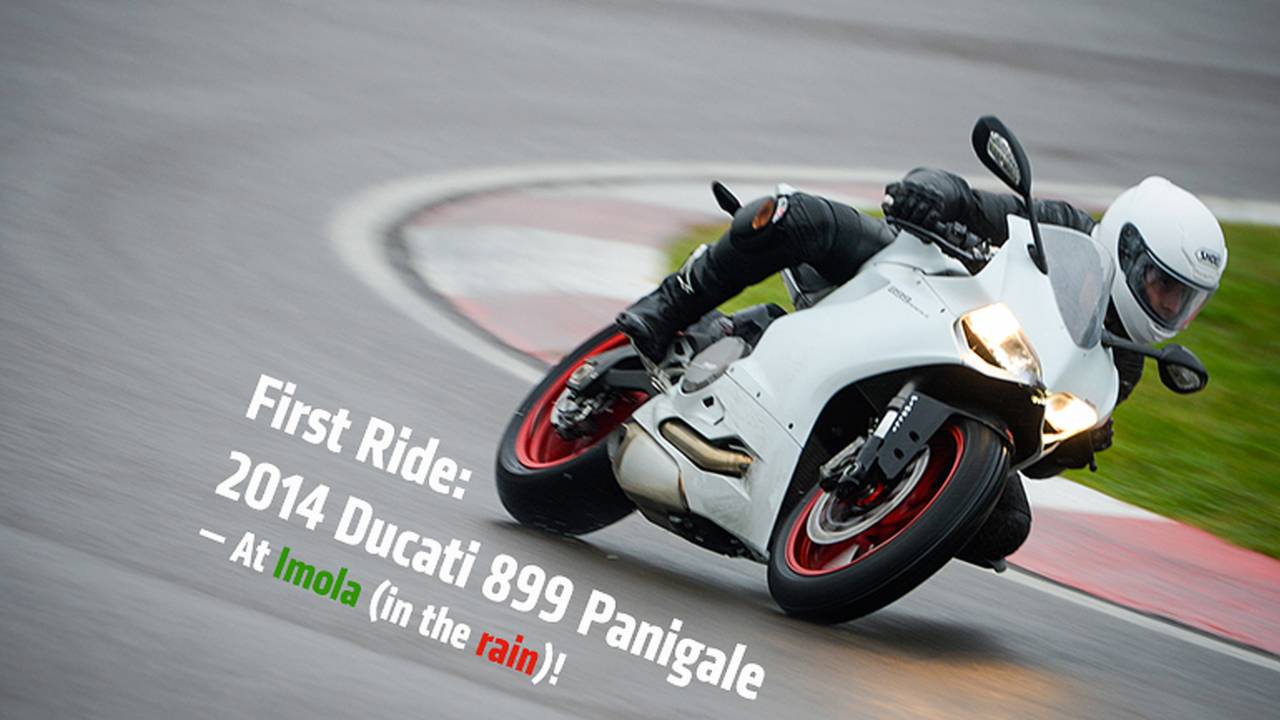 The 2014 Ducati 899 Panigale doesn’t fit into established motorcycle categories. It’s not eligible for any major international race series. It’s not priced to steal sales from any rivals. Instead, it’s been specifically created to make the Panigale DNA more accessible. We just finished riding the bike on Italy's Imola Circuit in the pouring rain and this is the first review you'll see anywhere online.

“We wanted a bike that riders will be able to wring the most out of in the canyons,” the 899 Panigale’s project leader, Paul Ventura, told us this morning. Before joining Ducati, he lived in Southern California, so is familiar with realistic sport riding conditions on the road. It’s there that the 899 is designed to work just as well as it will on the track, allowing more riders to access the Panigale's magic, more of the time.

Instead of starting with the old 848 Evo and working up, Ducati instead started with its 1199 flagship and worked on making it more agile, more broadly applicable, less costly and easier to ride.

Its “Superquadro” V-twin shares the same crankcases as the Ducati 1199 Panigale, but here is fitted with 100 x 57.2 mm cylinders. Less “over square” dimensions make the 848 cc motor’s power more accessible, despite its smaller capacity.

The 148 bhp, 72 lb.-ft. motor is still revvier than a traditional V-twin, but its curves remain a little fatter and lower in the revs than the larger version’s. Power tapers off as revs approach the 12,000 rpm redline.

As on the 1199, the motor remains a central element of the chassis. A cast aluminum front subframe connects the forks to the front cylinder, doubling as an airbox. Out back, the rear subframe is now a cheaper, tubular steel arrangement, but still connects to the rear cylinder in the same manner. Plastic covers hide the lower cost subframe, mimicking the look of the 1199’s cast aluminum affair.

That leaves the double-sided swingarm to be the largest visual differentiator between 899 and 1199. Ducati told us it’s there to help keep costs down. Other savings are found in the form of aluminum, rather than magnesium engine covers, a monotone LCD display instead of the full-color TFT unit and more affordable Showa BPF forks and a Sachs monoshock. None of that sacrifices much in the name of cost-cutting though, the swingarm remains very light and very stiff, the engine covers are light and robust, the display is comprehensive and includes all the switchable riding mode functionality and fully adjustable suspension front and rear.

The 899 is fitted with the same electronic rider aids as the 1199: Traction Control, ABS, Engine Brake Control and Quick Shift. All that is completely user programmable through the dash and all the aid can be switched totally off.

Despite all the less fancy parts, this isn’t simply a watered-down 1199. It actually gains agility over the larger bike thanks to a 11 mm shorter wheelbase, half a degree steeper front suspension and a narrower, 180/60-17 rear tire.

Nor should you be disappointed that the 899 doesn’t gain any huge numbers over the 848. At 372.5 lbs (dry) it may only lose 11 lbs and gain 8 bhp, but that minimal advantage hides the real story: the 899’s standard ABS adds 4.4 lbs (meaning Ducati actually shed nearly 15 lbs) and the motor’s higher revs enable Ducati to fit lower gearing without sacrificing top speed. Thanks to a 44 tooth rear sprocket replacing the 848’s 39 tooth item, thrust at the rear wheel increases by around 20 percent.

Italy's Imola Circuit is one of the most historically important race tracks in the world. It’s where Ayrton Senna was killed and is located just 60 kilometers from Ducati’s factory in Bologna. Its short straights and tight, technical corners should also be perfectly suited to a bike that maximizes agility, light weight and accessible power.

Unfortunately, it’s also subject to northern Italy’s unpredictable autumn weather; it’s been raining solid here since we arrived on Sunday. The rain was so bad today that Ducati called it quits after just three track sessions. World Superbike Champion, Carl Fogarty, who was flown in to make us feel bad about our riding abilities on the track, instead chose to intimidate us from the dry confines of the pit garage.

While the 899 is fitted with Pirelli’s excellent Diablo Rosso Corsa road tires, its lack of sipes away from the center and its track oriented side compound (the same as the SC2), necessitated the fitment of race wets today.

Those were aided by Ducati’s comprehensive electronic rider aids. During the first two sessions, full-on wet mode (restricting power to 100 hp and maximizing TC and ABS while minimizing engine braking) kept me upright as I learned the track. Later, MCN’s Adam Child helped me find a custom setup perfectly suited to the conditions — full power, just tamed by maximum traction control and ABS. It speaks to the system’s efficacy that no journalists went down at any point today, even with experience levels running from former professional racers down to road riders. Even the pros were leaning on ABS and TC to make things safe and predictable.

Also helping was the 899’s power delivery. In contrast to the larger bike’s positively violent nature, the 848cc Superquadro is smooth, predictable and linear. It gains revs very quickly, accelerating with urgency rather than exploding in your face like the 1199. It retains much of the character of the larger motor, drives hard out of corners through its mid-range and, most importantly, sounds just as good as the larger bike.

That performance is complimented by the suspension, which is more compliant than the 1199’s, with excellent damping control. Feel is excellent front and rear, making pushing the front relatively hard into corners and accelerating relatively early — much harder riding than you’d expect to be possible in these conditions — a fairly straightforward thing to do.

Accessibility doesn’t mean watering the experience down, it means making that experience easier to reach.

Near identical looks to the 1199, both bikes easily look 10 years ahead of any other on sale right now.

The 899’s seat has been revised with a new shape and more padding, without increasing its seat height. The suede cover is much grippier than the 1199’s item, while the shape makes it even easier to hang off. Comfort felt excellent on this short test.

In fact, the 899’s overall ergonomic packaged (identical to the 1199) is spacious, comfortable and facilitates both easy transitions and good body position.

The electronic rider aids are as effective as they claim to be. I slipped off the peg during one corner entry, the resulting body movement causing me to grab much more brake than I meant to be using. Without ABS, that would absolutely have caused a crash. With ABS, it was a minor hiccup.

Despite the lower capacity, the engine retains the big V-twin boom. You’ll never mistake Ducati’s sound for anything else.

The engine is fast, but friendly. It’s easy to find full throttle, but hard to want any more. As the capacity would suggest, its curves feel much fuller than a 600, but don’t get as violent as the 1199’s.

Even now, Ducati still fits the world’s most slippery foot pegs to its otherwise near perfect motorcycles. In today’s rain, they were positively treacherous. Every single rider complained of slipping off of them and doing so was probably as close to crashing as anyone came.

Some of the cost cutting from 1199 to 899 is too strongly in visual evidence. While the swingarm isn’t quite as bad in real life as it first looked to be in the press photos, other components like the rear brake caliper mounts, the rear subframe and the non-adjustable steering damper simply feel cheap.

The menus in Ducati’s dash remain obtuse and are difficult to understand and use. Poaching a UX designer from Apple (or borrowing expertise from parent company Volkswagen) should be an immediate priority.

It’s also $1,500 more than the 2013 Triumph Daytona 675 R, which wears top-shelf Ohlins suspension and much fancier equipment than the Showa/Sachs stuff employed here by Ducati.

Neither of those bikes suffers the same “little brother” stigma that the 899 likely will. Deserved or not.

All the design, technology and character of the 1199 in a package that’s more agile, smoother and much easier to ride. On the 899, you’ll spend more time enjoying the ride and less time scared out of your mind. To us, that makes it a superior package whether you’re on the track (even a wet one) or on the road, where the 899 should be genuinely manageable and exploitable, two words you’d never apply to its big brother.

When I climbed off the 1199 R after riding it at COTA in ideal conditions, I felt lucky to be alive. Today, after mastering a wet Imola Circuit, I feel like a hero. That’s what the 899 will give you, too.