Real world review of the all-new 2013 Ducati Hyperstrada. A fun bike you can tour on.

So where were we? Ah yes, the Strada treatment. 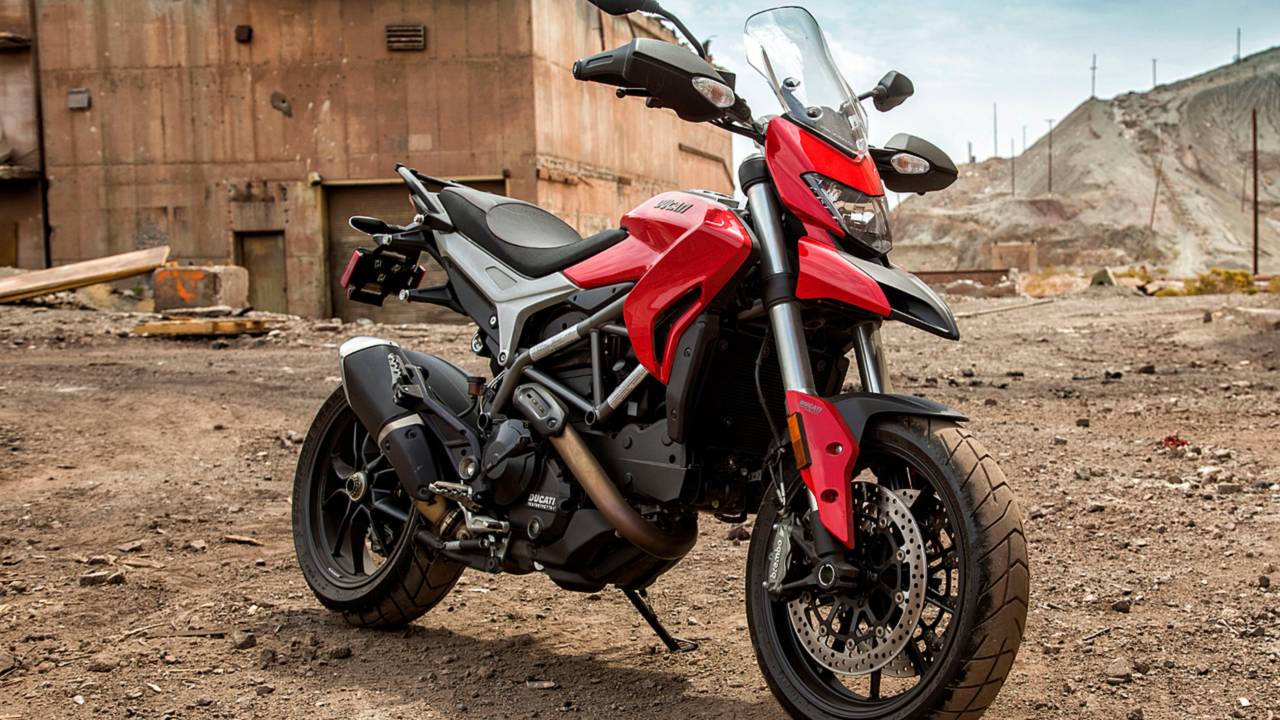 The Hyper Strada gets a new seat. The seat is now wider, with additional padding for both the rider and the pillion, and sits a little flatter, sloping less into the tank. In addition to the seat, they’ve also included pillion grab handles should someone be brave enough to hop on the back.

The Hyper Strada also receives a small touring windscreen, as well as two quickly detachable side bags. They will hold 50 liters of your precious cargo and, should that not be enough, you can purchase an additional 31-liter top case.

The handlebars have been raised by 0.78 inches to further increase rider comfort, and Ducati has included a center stand, as well as extended mud guards and a sump guard.

As with the other Stradas, Ducati has included two auxiliary 12volt power outlets for all of your onboard charging needs. 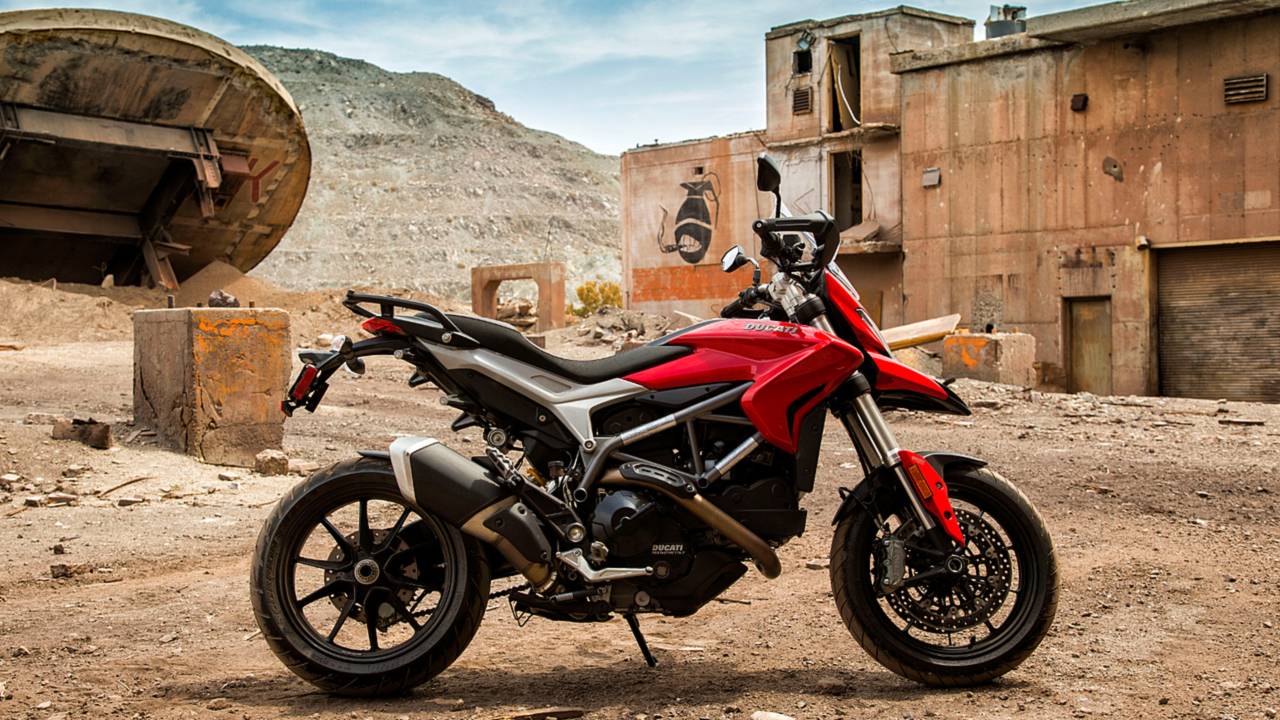 I have a confession to make. I had a Ducati ________ Strada and was not able to take it on a trip. I know, it’s terribly embarrassing to admit but, despite my best efforts, I just couldn’t make it happen. Before you freak out on me, this doesn’t mean I didn’t take it on long rides, it just means I don’t have the epic adventure you were all expecting to read about.

I did, however, ride the bike all over southern California, as is the life of a motorcycle journalist. Meetings in Los Angeles and then Orange County, and carting my girlfriend around to 4th of July parties from Balboa Island to Malibu to Los Feliz kept me plenty busy. I used the panniers more than a few times to carry everything from just my laptop to a few days’ clothes and my forever-present battery chargers.

The seat is absolutely fantastic. It slopes toward the tank less which means it doesn’t squish your manly bits all the time, and it’s a tad wider so it spreads your weight more evenly through your butt so you can sit longer. It felt like it fit better from the second I sat on it and, after having problems with numerous Ducati seats, I was relieved to know either A) they were working on it or B) maybe I just got lucky, but at least I didn’t have to write off all Ducatis as being horrendously inhumane on your posterior.

The windscreen, as well, is fantastic. It’s actually quite small and unobtrusive in person, yet seems to deflect just enough air away from your chest that it doesn’t create the same fatigue I had from riding the Hypermotard SP on the freeway. I did notice that it affected different helmets differently, creating some buffeting with my new Schuberth C3 Pro, while having no issues at all with my Bell RS-1. For the life of me, I can’t come up with why it affected the one and not the other, especially since the Schuberth is better on most bikes.

The side bags are good for carrying a few things, but their awkward shape and size keep them from being very useful for any real touring. When I loaded the bike down with all my camping gear, I filled the side bags with clothes and random odds and ends, and then used the wider footprint created by the seat and bags to strap my camping gear to. For those of you remembering I said I didn’t take the Hyper Strada on any epic adventures, I got a text about 6 minutes after loading down bike that the last of the guys had bailed from the camping trip we had planned to make up for a different friend bailing on the trip we planned the week prior. 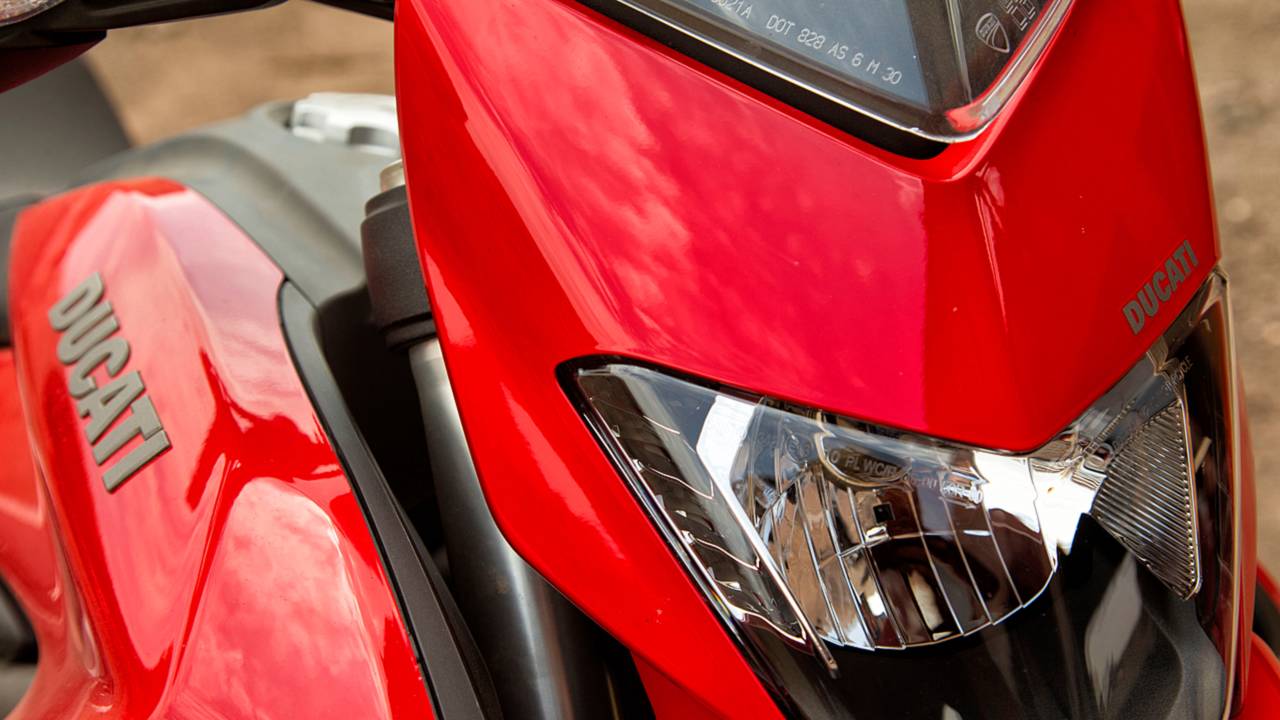 As with the entire Hypermotard line, this bike is incredibly good. It’s light, it’s nimble, the fueling is good, the engine is wonderful, the gas mileage is great, and the bike is absolutely beautiful.

The changes Ducati have made really help make this bike more comfortable at higher speeds. The slight rise in the bars paired with the wider, flatter, and thicker seat and windscreen give you just the advantage you need in combating the wind normally felt on big super moto/naked/street destroyer thingies.

As on the 1,200cc Diavel, Multistrada and 821cc Hypermotard, the Testastretta 11 motor's 15,000 service intervals make these Ducatis you can actually live with.

The Ducati Hyperstrada doesn’t feel like it has the same athletic prowess as the Hypermotard SP we just rode. Part of this is due to the Hyper Strada not receiving the same upgraded components as the SP, but another part is because of the slight changes to the bars and seat. The riding position is still good, but it’s just lot that bit of edge that screamed “push me harder.”

The Ducati Hyperstrada retails for $13,295, placing it $1,400 under the Hypermotard SP and $1,300 over the regular Hypermotard. By themselves, the additional parts would cost you $2,000, so assuming you want all of them it’s a good deal. The seat, windscreen, panniers, and grab handles are all accessories available for the Hypermotard and Hypermotard SP.

I have really struggled with this section of my review. The Ducati Hyperstrada did everything I asked it to, but somehow something is still missing. It’s not that razor sharp scalpel anymore, this alteration just a great all around motorcycle equally good at a weekend away as a fun day in the canyons. Personally, if I’m going to spend this kind of money, I’m going to spend the extra money and do it right and get the Hypermotard SP and then purchase the touring seat and windscreen and put those on when the adventure requires it. The SP is just so good that I’d rather have its full potential and deal with it not touring as well, than buy the more applicable but less athletic motorcycle. 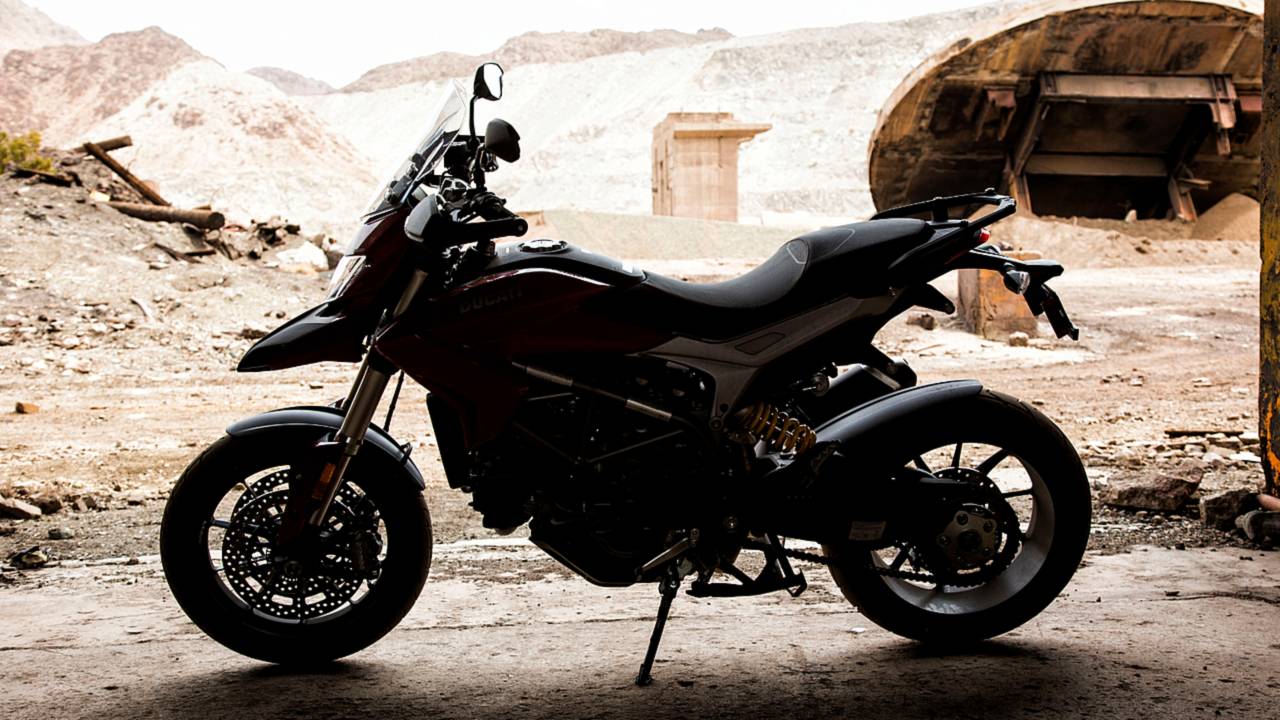 Regardless of which side you come down on, if you buy either of these two bikes, you’re guaranteed to have an absolute blast.