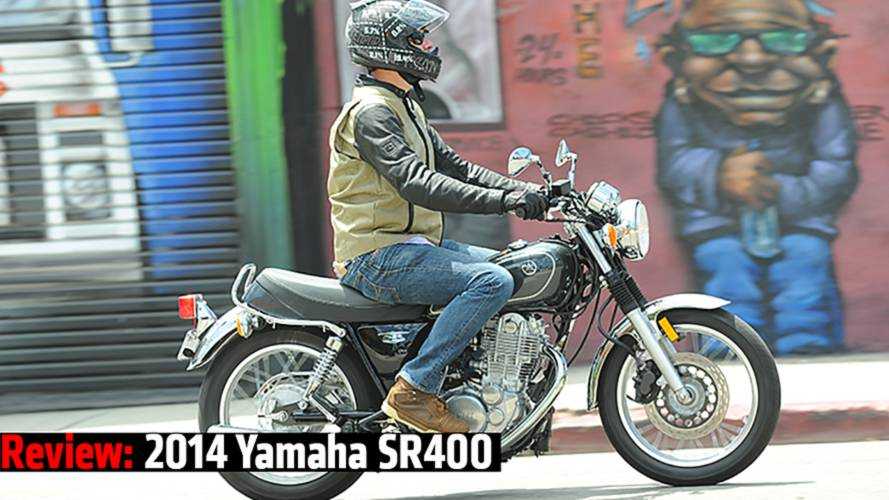 If it ain’t broke, don’t fix it. That’s what my dad used to tell me about motorcycles. Don’t screw up a good thing, just leave it alone. Yamaha has built this motorcycle for 36 years, with hardly any upgrades. As years passed, the bike still sold and performed well, so why change it? No need to reinvent the wheel or create a groundbreaking, entry level motorcycle when this one was doing just fine. Enter the 2014 Yamaha SR400.

We haven’t seen this bike in 33 years on the U.S. market. Like a time capsule that’s been opened, the 2014 Yamaha SR400 is a completely new, old motorcycle.

What’s new? Everything and nothing. This is a real retro bike, not some vintage seat pan and paint job that provokes marketing to overuse the word “throwback." Nope, it's a real old bike that features the good and bad of the original. It has all the charm and feelings of a vintage bike, without the repair bill. Did we mention there’s no electric start? It’s a kick start only.

Yamaha built an acclaimed, now considered rare, classic motorcycle in 1978: the Yamaha SR500—a single-cylinder, entry-level thumper with ‘70s styling and low cost. It was the perfect bike to chop up, because it was cheap, small, easy to work on and anyone could ride it, from experienced riders to housewives.

The U.S. lost that bike after 1981, but Yamaha remained selling it as a 400cc (because of certain legalities and cc-limits) in Japan ever since. Now it’s 2014, Yamaha brought it back, and haven’t changed a dang thing—well sort of.

Today’s media ride started on a Venice Beach, California rooftop. Eight moto-journalists piled into the Red Bull room, reminiscent of a scene from Real World. We listened to a short video presentation, then met our group of thumpers at the hotel entrance. If you rolled the bike beside a 1981 model, you’d hardly spot any differences. The seat pan and tank have evolved with the new Japanese models, but to the untrained eye, the new bike looks identical to the 1978 SR500.

After three different photo stops, through back allies, pasted graffiti and down side streets, we finally hit the road for a few hours of Southern California riding. Racing out of the congested LA streets, it became immediately apparent that this little bike is an awesome lane splitter. Balanced, skinny with no accessories or added distraction on the bars, it’s nimble and made riding through traffic less of a chore.

In a pack of a dozen motorcycles single file, we never stopped moving, rolling tight between Hwy 1 traffic through Santa Monica. The bikes had plenty of down-low torque which made skirting between cars a sheer blast.

The gearing made for great street riding, without having to constantly find the right gear. Enough power to get out of a tight spot and barely enough top-end to keep the fillings in your teeth.

We finally made our way out of the concrete jungle and through the Prius-filled Malibu streets for some canyon carving. Yamaha was smart to take us up here, because the bike excelled on tight twists, exceeding our expectations.

We pushed harder and harder. Throttling out of corners, the suspension would squat, making exiting those corners feel like G-force was propelling you forward. The soft suspension reminded me of my first bike, a 1978 Honda 125. The controls, seat and pegs all felt like a vintage dirt bike. It made me want to be up on the bars and steer into bumps, rather than away from them.

We pushed on, although we'd often find ourselves exiting a corner without enough gearing. We'd downshift entering a corner, take it fast and then go to power out and find we needed another gear… or two. Leaving the mountains overlooking the Pacific Ocean, we made our way onto the highway—luckily with little traffic this time. The bike did good enough around 60mph, but struggled to keep up with the fast lane.

I enjoyed kicking the bike over every time and it became a cinch by the end of the ride. The method is similar to the original SR500 and easier thanks to fuel injection, but there aren’t any safety features associated with the kill switch, so if you forget your ignition is off and start kicking, you’ll quickly exhaust yourself.

How to Kick Start a Fuel-Injected Bike

A couple people on our media ride had trouble with it, but once you’re familiar with the proper procedure, it’s easy. One of the Yamaha guys claimed to be able to start the 400 with his hand.

Luckily for those of you not in the golden state, that gigantic, asphalt scraping, smog-canister is a CA-only emissions deal.

We dragged our heels around every corner as we slung the little bike around the canyons. Sometimes it’s more fun to ride a slow bike fast than a fast bike fast.

Anyone can ride this bike, and experienced riders can challenge themselves, without any fear, just smiles. The seating position even for me at 6’3” was comfortable. Sit up tight on the tank like your old trail bike or lean back on the flat seat pan for a more leisurely take on the bars. The seating position would build confidence in a new, inexperienced rider. You feel inside the bike, not on or above it.

Cutting through traffic with our tour became a game. It was like a scene from On Any Sunday of riders zig-zagging around with ear-to-ear grins—just replace the sandy beach for a congested highway, and Steve McQueen with out-of-shape journalists.

Despite its small size, the vintage aspect will require respect from buddies and the local bike night. It would be great to have a group of friends on these bikes all out at once, but it’s not likely. You’re not going to keep up with your pal's 600, but you’ll be the one laughing while you wait on them at the bottom of the canyons or end of a traffic jam.

You already know about most of the bad qualities of this bike. There are inherent drawbacks of this type of bike: thumping idle, lackluster power and a cheap feel. On the flip side, all of these problems give this little wonder some charm.

At 45mph, it was perfect. I barley felt the engine, but it still had enough power to pass, but it’ll feel as though you’re going to explode off the bike (think: ejection seat), as the rpms of the engine scream reaching highway speeds. This bike doesn’t encourage you to take it to redline, as it has enough torque lower in the rpm range, which makes for another great starter bike quality. No need to change gears a bunch or search for that rpm sweet spot (referring to urban riding; in the mountains we needed to change gears a lot).

The clutch quickly became an issue. We had trouble getting it into first gear and neutral a few times, which is probably an issue with a having a small diameter clutch or something simple like improper clutch adjustment. It could be a serious problem, like a shifting fork issue, but we can’t make that assessment without riding it for longer.

It needs more ground clearance. Most of the full size riders were having trouble with the bike scraping. Often a factory bike needs to be lowered for a better look and ride, but this one needs to be higher. That early-model trail bike feel meant we had to ride it like an early-model bike and we needed more room.

Unfortunately there’s only one color option at the moment. More importantly, we hope they bring back the cast spoke wheels.

Finally, the price. It’s a little too over-priced for some of the other beginner bikes on the market. This is a tiny, fun, low-maintenance no-thrills motorcycle that feels cheap in your hands and just okay on your wallet.