Honda BULLDOG Unveiled - Would You Ride It? 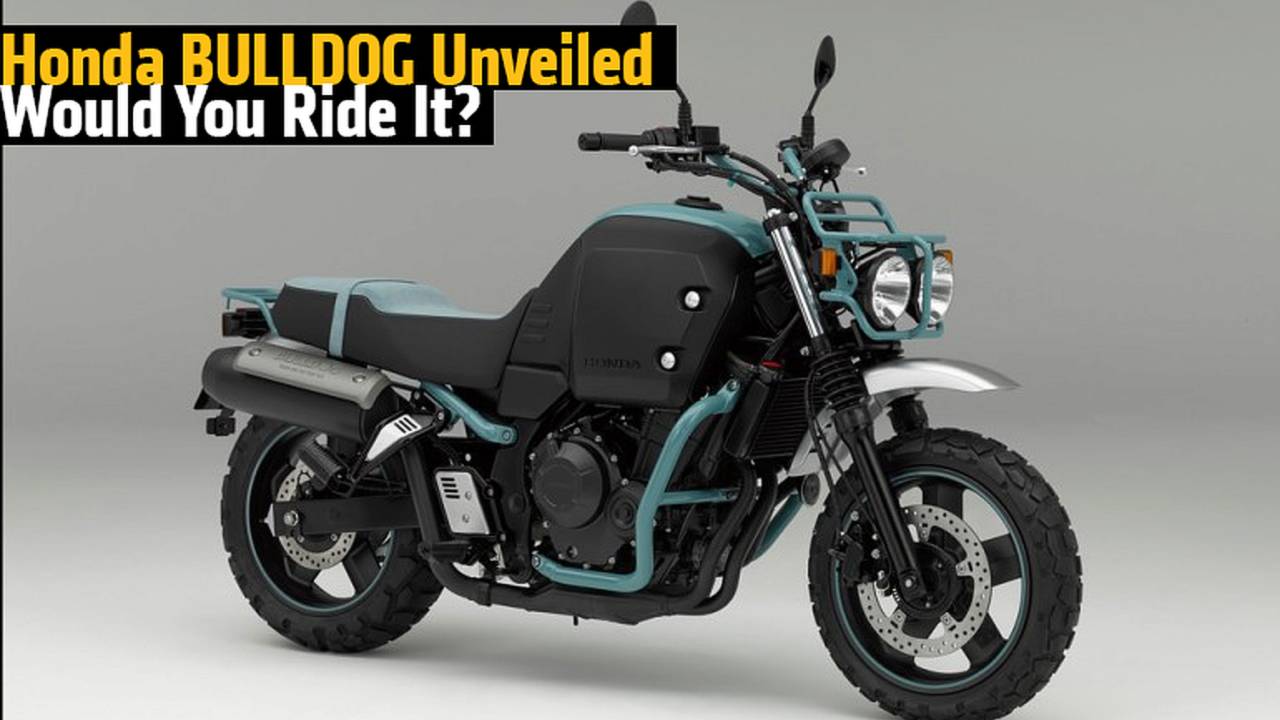 Honda unveils the BULLDOG concept. Would you ride it?

Honda unveiled the BULLDOG concept earlier today at the Osaka Motorcycle Show. The new moto is based on a CB400F, but with smaller diameter and wider off road tires. It's also part ATV.

The CB400F is the Japanese market version of the CB500F sold everywhere else, but with slightly less engine capacity.

READ MORE: Learning How to Lane Split in One of America’s Most Congested Cities

The BULLDOG looks the face of Speed Triple was grafted on, and has a gas tank that looks like a combination between a BMW's and a Honda Rukus'. Yet, I totally love it. Two ideas come to mind when I look at this. One, is that it's portable, fun, transportation. The other is water crossings. No particular reason for the order other than they both would be a hoot. Great size for new riders and kitschy cool enough for the rest of us. I cant quite figure out why, but I like this as a possible motorcycle.

Give us your thoughts on the BULLDOG in the comments!

OSAKA, Japan, March 20, 2015 - Honda today unveiled the world premiere of the BULLDOG as an exhibition model (concept model) at a press conference, at the 31st Osaka Motorcycle Show 2015.

The BULLDOG promotes a new world of leisure with motorcycles. The model was developed with the concept “Lovable Touring Partner,” and was designed to go beyond the boundaries of conventional leisure motorcycles, to actively enjoy outdoor life.

The BULLDOG’s 15-inch wide-tires and low center-of-gravity realize a low, 730mm seat height, ensuring a solid footing. Its unique robust, yet charming styling undoubtedly brings smiles to the faces of not only riders, but people who don’t usually ride motorcycles.

The liquid-cooled 4-stroke DOHC inline 2-cylinder 400cc engine has powerful, yet easy to handle output characteristics, realizing a nimble ride in a wide range of environments from urban to rural areas.

The BULLDOG is equipped with a carrier suitable for camping-touring, and features accessory storage on the sides of the fuel tank, which also act as a styling accent.

The BULLDOG, a playful, next-era concept model, will be exhibited at 42nd Tokyo Motorcycle Show from Friday, March 27 to Sunday, March 29 at Tokyo Big Sight.

WATCH THIS:  Yamaha To Offer Free Sportbike Demos At Track-Days Across The Country | RideApart