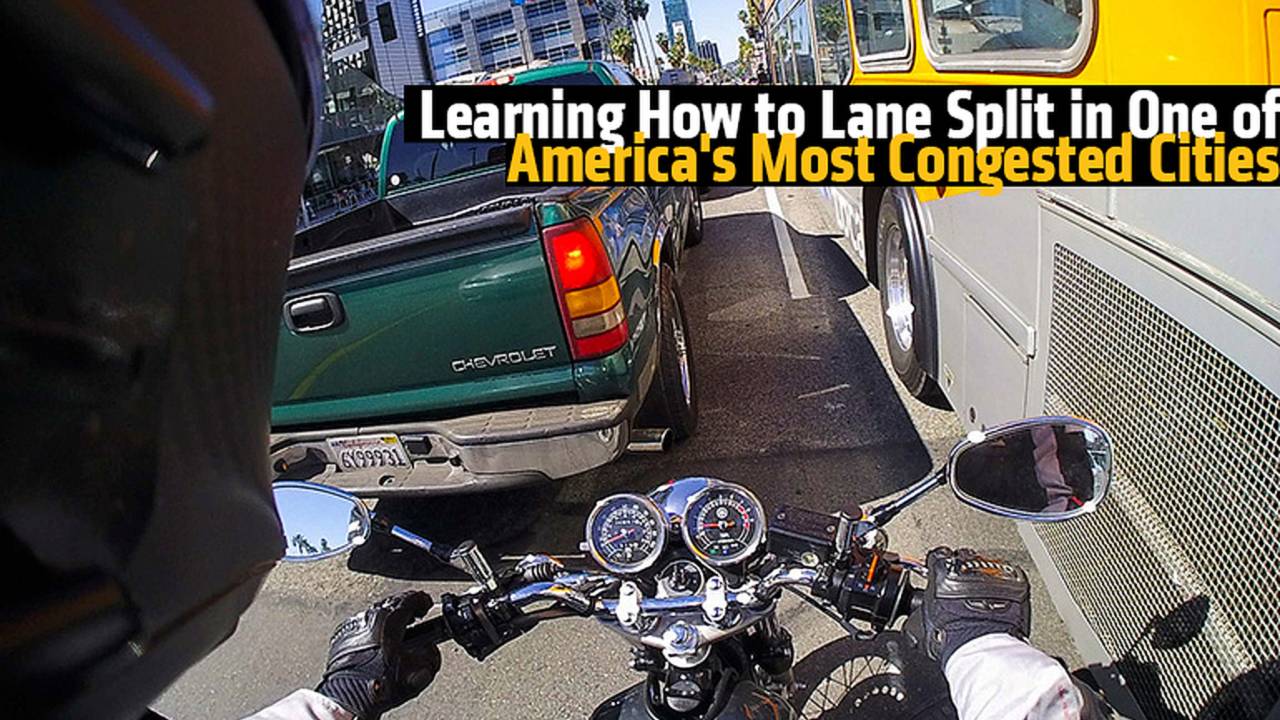 Anna learns the ins and outs of lane splitting in San Francisco.

Although my first big-city riding was just north of the border in Vancouver, the idea of riding in San Francisco was still looming in my head. A dark cloud followed me, creating anxiety with every mile. Luckily just like my first time in Vancouver, I had a tour guide, Lena, to help me determine my route from Oakland to the Zoo and back again.

From the house I was staying at, up in the hills of Piedmont, we rode 5 minutes to the closest BART station, parked at MacArthur and rode the train under the bay all the way to Glenn Park. From there, we hopped on a bus and arrived at the Zoo, where I had a temporary job for the next six weeks. It took us two hours to get there, and I began to quickly feel overwhelmed with the commute.

I thought I'd better learn to lane split.

My first week commuting to the Zoo, I’d ride my Radian to the BART, and nervously leave it parked for the day. I never felt good about leaving it for long periods in a public area. Luckily, nothing ever happened and it was nice that I never had to pay to park like the rest of the cars in the lot (this is where two wheels are better than four.

In contrast to my experience with public transport in Canada, I quickly became depressed spending hours on the BART (Bay Area Rapid Transit for those unfamiliar with the Bay Area) and the buses in San Francisco. My commute was twice as long in a city twice as big. I watched the majority of folks plugged into their earbuds, mesmerized by their smart phones, oblivious to the world passing them by. I didn’t find the enjoyment in this different mode of transportation, instead I dreamt of being on the bike for my own sanity.

MUST READ: How To Lane Split | RideApart

Billy picked me up from the Zoo and took me back to Oakland to get the Radian. Doubled up on his GS, we split lanes through rush-hour traffic and it only took us 45 minutes to get to my house. It was way more intimidating riding on the back of a bike, but I watched and learned and was determined to start riding to the Zoo the following week.

Some decisions require a giant leap of faith—learning to lane split is one. The next week by myself I was determined to do it.

My first attempt—before actually diving into the middle of traffic—took forty minutes filled with anxiety, heart arrhythmias, sweat, and almost tears while baking on asphalt in bumper to bumper traffic. I suffered, with angry cagers trapped in their cars, suffocating in fumes and cigarette smoke while confident, experienced riders whizzed past me.  I was envious of the cool breeze they had flowing through their jackets.

Anger finally overcame my fear.  (Ok, Ok, you got this, you pussy). I watched my mirror, waiting for the next rider. Here he comes. Clutch in, one foot up. I was ready.

A rider passed. I opened throttle, slipped the clutch and pulled out.

The wind in my face was an instant relief like I was held under water and just inhaled my first gasp of air (Haha, you damn cagers, I’m free!).

Following the rider between cars at a steady 20 mph, my arms were tight, hands were clenched, and my jaw was locked. But the more I rode, the more I relaxed. Twenty-miles-per-hour felt like 60, when sailing between lanes of stopped traffic. It was liberating.

Before long, stress and excitement fatigued my mind and body, so I found a gap in the droned lane and exited the free lane. It was like stepping off a roller coaster. Tingling and giggling, I took a deep breath, shook my head and shoulders, and tapped my fingers on the grips while reflecting about what I just experienced.

Lane splitting was dangerously fun. It was like being an invincible hero in a lawless video game. I realized I was going to have to set rules for myself to avoid getting into trouble:

Rule #3:  Only lane split between the far left lanes. There’s less going on.

Preparing for a second run at lane splitting, the terror struck again. I felt like I was planning to jump off a cliff. That paralyzing hesitation before committing to free fall only wound me up more (Stop thinking, stop thinking. Just go!).

Another biker zipped by and I instantly wove out behind him. At that moment, I made a very naive mistake. I didn’t check my mirror and there was a pissed off biker riding my ass.

Rule #5:  Always check the lane before you pull out (amateur).

With more practice, lane splitting became more natural. The scariest part, in the beginning, was taking that giant leap of faith.  Deciding when to enter the free lane and where to exit—all while controlling the bike through fickle traffic—was a lot to multi-task. I had to be very determined and committed to my decisions. There was no time for hesitancy.  It required ultimate focus.

After splitting lanes on a regular basis, it was easy to feel like the entire road was mine and the concept of lanes didn’t exist at all.  I could ride anywhere around any obstacle, and the lines between the lanes almost became invisible. I’d have to remind myself when traffic started breaking up in order to obey the common driving laws. It was tempting to weave through traffic at high speeds, but I had to remember my rules.

For me, the purpose of lane splitting is not only to allow riders to be seen in heavy traffic, but to also help riders avoid extreme heat when it’s bumper to bumper.  Unfortunately, the luxury of lane splitting, like anything else, can be abused. That’s why I set boundaries for myself.

But I’ll admit, once you learn to lane split, it’s hard not to do it all the time. It becomes a desirable dare for the thrill. You're a Samurai and the road your opponent. Like a warrior, you strike and block every challenge, executing with precise moves of a skilled soldier.  It’s empowering.