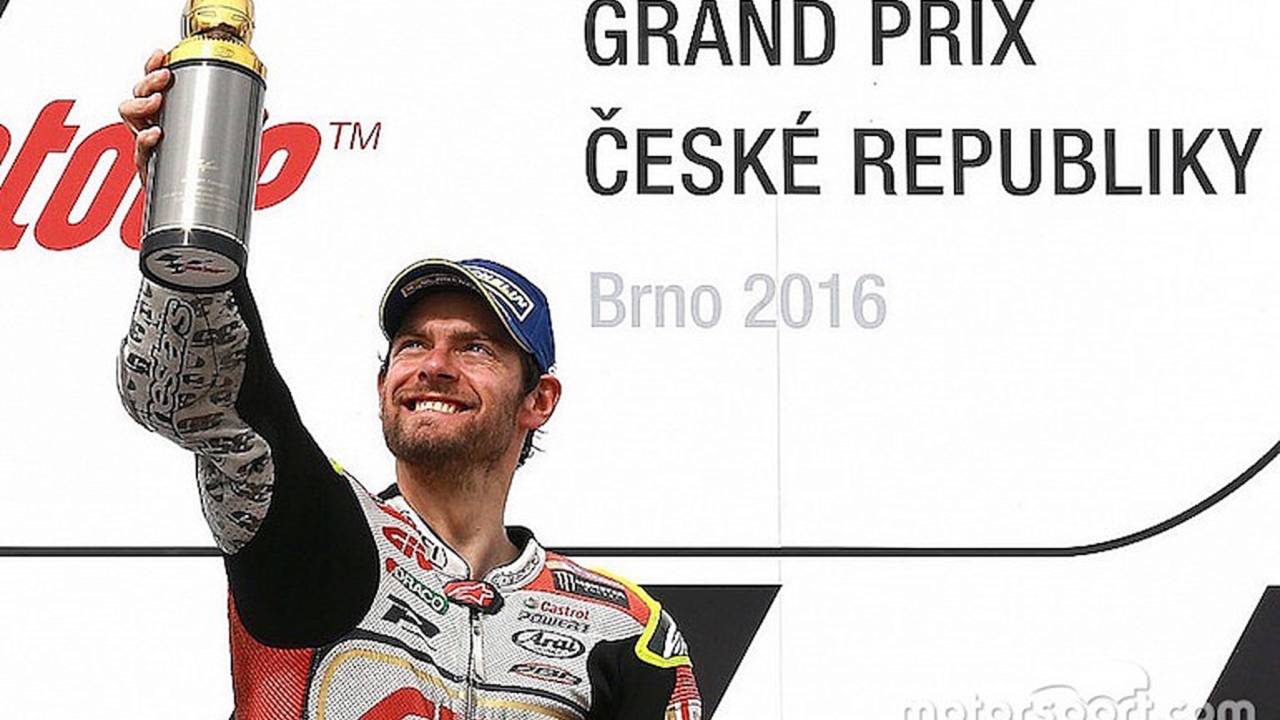 Cal Crutchlow scored his first-ever MotoGP victory at Brno following an inspired tire choice that allowed him to surge through the field from 10th on the grid on a wet track.

Rain before the start meant everyone started on wet rubber, and the selection of hard tires turned out to be crucial. Crutchlow opted for hards front and rear, and his decision was proved inspired. He carved his way to the front in the second half of the race, and beat Yamaha’s Valentino Rossi – who chose a hard rear and soft front – by over 7s. Marc Marquez was a solid third on his factory Honda.

The early stages were a Ducati benefit, but when Andrea Dovizioso’s front tire appeared to delaminate it sparked a fall from grace – with Andrea Iannone salvaging eighth with a destroyed front tire.

The race was also a disaster for Yamaha’s Jorge Lorenzo – who led into the first corner – but slumped to 16th in the kind of conditions he hates.

He had just entered the top 10 when he gambled on switching bikes for slick tires, but he trailed home in 17th after having to make a second trip to the pits to switch back.

Story of the race

The race began on a full-wet track, but with the expectation of a flag-to-flag race with bike swaps to slick tires. The majority started with soft wets front and rear, with Lorenzo and Rossi going for the hard rear.

Lorenzo made the best start but Iannone led him and Marquez into Turn 1, before Marquez zoomed underneath them to lead. Dovizioso was the man on the move, jumping up to second by halfway around the opening lap, as Lorenzo tumbled back through the field as expected.

Suzuki’s Aleix Esparagaro surged up to fourth, ahead of teammate Maverick Vinales, as Scott Redding’s Pramac Ducati also moved up.

Lorenzo, having led into Turn 1, ended the opening lap in 10th but with Rossi also struggling and down in 12th.

Dovizioso hit the front at the final corner of lap two, slicing past Marquez, as teammate Iannone followed suit two corners later. Redding was the fastest man on track, passing Marquez on lap three to make it a Ducati 1-2-3.

Outside the top 10, Rossi passed Lorenzo but was only 12th, and then lost a further spot to Cal Crutchlow’s LCR Honda, who was using hard fronts and rears. Lorenzo slipped back to 16th.

Crutchlow’s tire combination appeared to come at one-third distance, and he surged back into the top 10 followed, at a distance, by Rossi.

Dovizioso took a trip through the gravel at Turn 1 and toured back to the pits, shaking his fist at his front tire which appeared to have suffered a delamination. He rejoined on intermediates, but quit the race with six laps to go.

By half distance, leader Iannone had Redding right with him out front, with Barbera now third and closing from Marquez. Crutchlow had risen to fifth, carving his way past the Suzukis of Aleix Espargaro and Vinales. Rossi lay eighth.

With light drizzle now falling again, Crutchlow passed Marquez for the honour of top Honda with 10 laps to go, and then set about Barbera, passing him for third a lap later. But Barbera repassed him, before a three-wide moment that saw Crutchlow jump to second as Redding fell back.

Rossi was now coming into play in sixth, as Aleix Espargaro went out with eight laps to go, while Lorenzo entered the top 10 for the first time since the opening lap.

Bradley Smith tried slicks with nine laps to go, but abandoned the experiment, while Lorenzo pitted for slicks a lap later. He too found out that was a bad idea, and pitted again.

Crutchlow hit the front for the first time with seven laps to go, as Rossi passed Marquez for fourth. With five laps remaining, Rossi passed Barbera for third on the front straight.

A few corners later, he passed Iannone for second, but Crutchlow was now 5s clear up front.

Marquez worked his way past Iannone and Barbera in the closing stages to grab a vital podium finish in championship terms, with Lorenzo nowhere.

But there was no stopping Crutchlow, who cruised to a dominant victory. Rossi finished a distant second, well clear of Marquez.

With Iannone’s front tire chunking terribly in the closing laps, Loris Baz surged up to fourth – having also chosen hards all round on his Avintia Ducati.

Barbera was fifth, ahead of Eugene Laverty, Petrucci, the wounded Iannone, Vinales and Tito Rabat.

Redding tumbled down the order in the closing laps down to 15th. Lorenzo trailed in 17th.