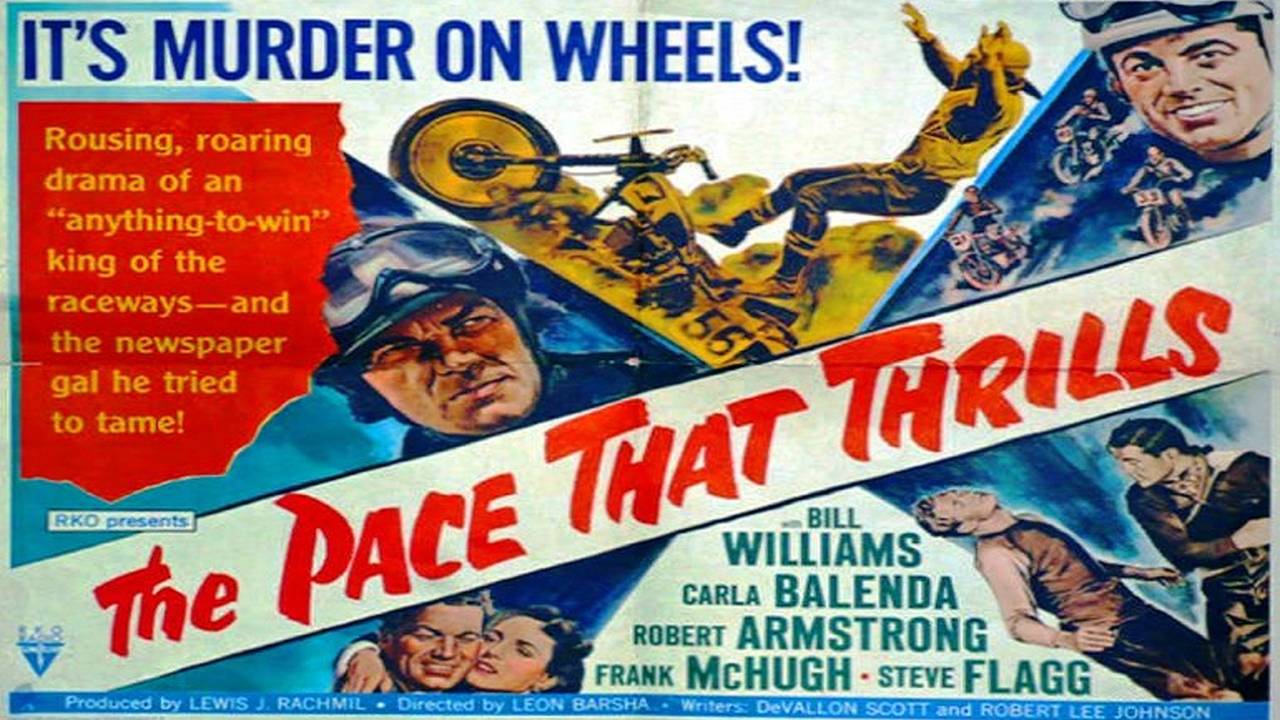 We review The The Pace That Thrills, a 1952 motorcycle racing film that features everything good about the biker cuture.

Just a year before The Wild One defined the biker movie genre, Howard Hughs produced The Pace That Thrills, which presented a more balanced approach to the fun, danger, excitement, and rebellion that motorcycles projected. These are not outlaws (which may be why you have never heard of this movie) but just regular people who ride and race for fun and fortune, and a love triangle that develops between them. This is actually on TCM this Friday (10/14), as part of a day of vintage car and motorcycle racing movies, at 12:45pm EST, or 9:45am PST.

Bill Williams plays Dusty Weston, a motorcycle racer who plays by his own rules, or sometimes none at all. Carla Balenda plays Eve Drake, a hotshot reporter looking to make a name for herself, and maybe some love from a bad boy racer. Steve Flagg plays Chris Rhodes, the engineer behind a revolutionary untested new motorcycle, and Dusty's friend from their orphan days. Can Chris on the superior bike beat Dusty's better talent? Will a dame come between them? Will Dusty win at any cost, even if it means destroying a friendship, and maybe killing his friend? All these questions will be answered by the time the checkered flag flies!

This movie could almost be a publicity film for the good, wholesome fun of motorcycling. It shows the camaraderie of the typical motorcycle club, with camp outs, group rides and good natured competition, and none of the destruction of property, raping and pillaging that would define other biker films. When these spirited young motorcyclist get into a chase with motorcycle cops it ends with a dunk in a mud puddle, and a front page story in the paper, but it seems no one goes to jail.

You actually see all sorts of 1950s motorcycle competitions in this film. It starts out with flat track, which I am assuming was shot at Ascot, where Dusty resorts to the sort of dangerous dirty tricks that could get someone killed. But from what I have heard, kicking, elbows, and other cheats were normal at that track. Later at the rally, there is motorcycle polo (or maybe soccer?), hill climb, scrambles, and more. The most interesting race, and one that ought to still be done, involves riders sprinting 100 yards to their bikes, kicking them to life, riding back the 100 yards to pick up a passenger, then flipping a U-turn and riding 2-up 100 yards to the finish.

There are actually two plots going on in this movie, neither one really all that important. Eve dislikes the way Dusty rolls dirty, and writes a heavy handed newspaper article about him, which gets him fired. Chris, who typically plays second fiddle to Dusty, is now promoted to lead the race team and prove his new bike is the future. Chris and Eve also become an item, until Dusty realizes he most wants what he can't have. Of course, this doesn't go over well with Dusty's current girls, like Ruby.

The secondary plot revolves around the struggling Barton Motorcycle Company (BMC). Chris is the chief designer and engineer, and has come up with a hydraulic, automatic transmission motorcycle. This is supposed to be the advanced race bike that propels the company to a prosperous new future, but the company is so broke it's going to have to close-up shop if they don't win.

Rotten Tomato Rating: None, and no audience rating, but the IMDB rating is 5.7 out of 10 stars.

RideApart Worth Watching: I would say a solid 7.5 out 10, not for the plot, just for all the bikes and racing (it is barely more than an hour long).

Redeeming Quality: What began as a low budget B-movie is now a historical document of what riding a motorcycle was like in the 1950s. It is amazing that this movie was made five years after the infamous Booze Fighters pictures appeared in Life Magazine. Once Marlon Brando rebeled against whatever they had in The Wild Ones biker culture in movies would be changed forever.

The motorcycle chase through the dusty streets, even with as few cars as are on the street back then, is really shot well. I can hardly imagine how dangerous it was to do scenes like this back then with practically non-existent brakes. Yes, I know the people driving the cars/trucks were in on it, but threading the needle between oncoming traffic, with no brakes, no helmets, and a bike that doesn't change direction well, took some real skill.

Worth Noting: After the war there was a decade long tie shortage, ask your grandparents.

I am almost certain the dirt TT track, and a lot of the off road riding was done at the Paramount ranch. In certain scenes you can almost imagine the helicopters coming in with wounded over the mountain to land at M.A.S.H. 4077.

It is a shame that this, one of the earliest movies of the biker genre is not better known. It really should be revered like an American version of George Formby's No Limit. It is not available on any of the major streaming channels, but it is on Daily Motion and YouTube (though broken into five parts). If you have cable and get Turner Classic Movies, set your DVR to record it this Friday, October 14th, 2016 at 9:45 Eastern time, as part of an all day festival of racing movies.