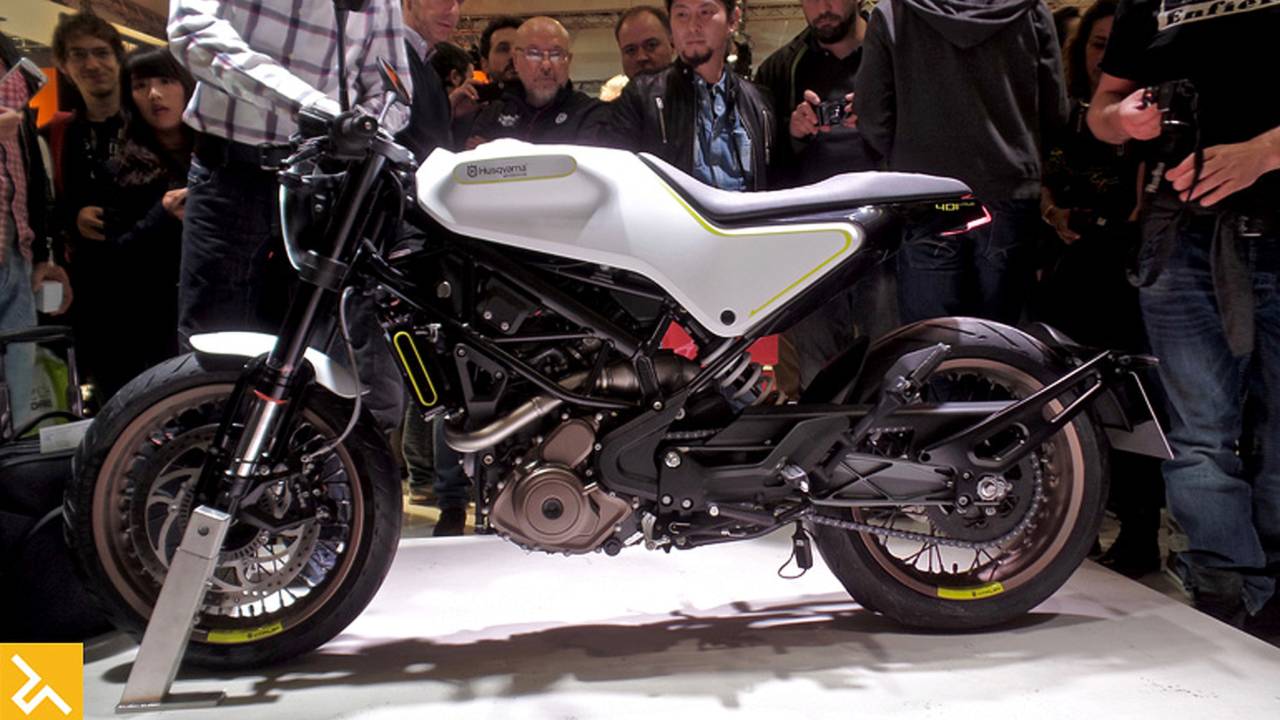 Husqvarna introduced the Vitpilen (White Arrow) and Svartpilen (Black Arrow) concept models two years ago at EICMA. Now the street Huskys have moved to the production stage under the auspices of KTM in Austria.

The company description: “Advanced engineering meets authentic, pure design to deliver a modern, uncompromised and authentic street riding experience. This is the main attribute that differentiates these bikes from any ‘retro’ or ‘classic’ motorcycles being offered by many other manufacturers.”

They elaborate: “So are these new Husqvarna street motorcycles naked bikes, café racers, street fighters, light commuters, scramblers, sports-tourers or cruisers? We like to think they’re something else, so we simply call them ‘Real Street’. As they’re bikes unlike any that have been seen or ridden before, they needn’t be grouped into any existing bike category. …not street-legal bikes adapted from dirt, supermoto, street racing, supersport, flat track or rally. Just a simple, yet progressive bike design concept that delivers modern technology in a trimmed-down package that is fully focused on the functions and feelings needed for an authentic ride - and free of everything else.”

The Vitpilen 401 is powered by a fuel-ejected 375cc Single in a lightweight steel trellis chassis with WP suspension and LED lighting. The 46mm throttle body is controlled by a ride-by-wire system. “Designed with specific flex characteristics, the frame works in conjunction with the WP suspension to offer a comfortable and confident feel and combined with a tight turning circle for ease of use in urban environments.”

The scrambler-style Svartpilen gets “rugged knobby tires, a practical tank rack and more robust protection than its Vitpilen sibling, which includes a protective skid-plate and exhaust protector. The riding position on the Svartpilen is also more upright because of its higher and straighter bars.”

Both models have a 9.5-liter fuel tank, slipper clutch and 320mm front disc with four-piston calipers. The 230mm rear disc carries a single piston, floating caliper. Additionally, a state-of-the-art Bosch 2- channel ABS system is fitted. The Svartpilen runs Pirelli Scorpion Rally STR tires, while the Vitpilen wheels are fitted with Metzeler M5s. The Vitpilen 401 is fitted with a bench seat, while the Svartpilen has two single seats; the rear perch on the latter is removable to fit a luggage rack. Both models are scheduled for production later this year.

Slated last on the production schedule is the Vitpilen 401 Aero, “a compact, single-cylinder ‘Real Street’ bike that it is a modern interpretation of what a faired bike should look like.” The bodywork “completely changes the whole set up of the bike. An all-new windshield gives the Aero’s surface a fuller appearance compared to the Vitpilen 401, while allowing the front and rear of the bike to perfectly match each other. This manages to create an entirely new balance and very different proportions.”