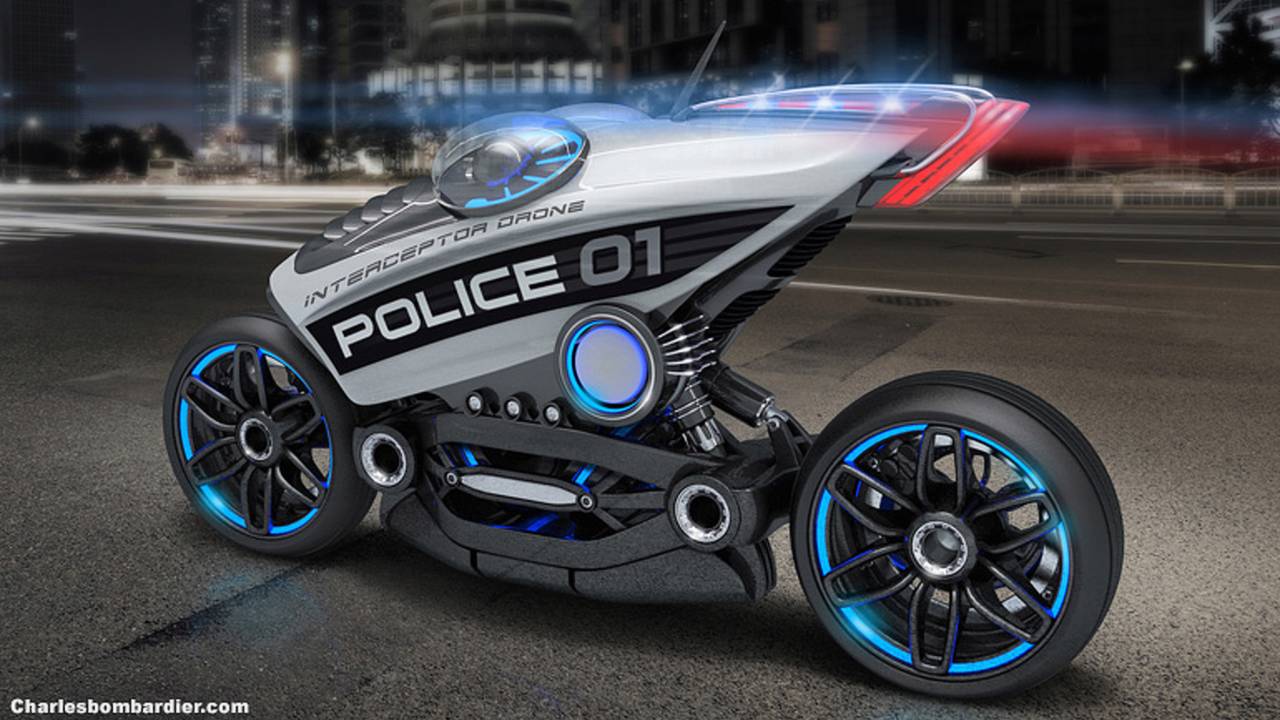 Are Motorcycle Police Drones Coming? Apparently, we will be monitored by autonomous robot police vehicles sooner than later. Can you say Skynet anyone?

According to a CNN report, conceptual designer Charles Bombardier imagines a future with riderless police motorcycles chasing after us.

“One single policeman could supervise five Interceptor units, which would monitor cities 24/7 while issuing tickets to any offenders via mobile apps," he explained. "The design for these futuristic police drones already exists, and could soon become a reality.”

Bombardier's company, Imaginactive, “is a nonprofit organization that inspires the next generation to dream up the vehicles of tomorrow.”

"It's only the natural evolution of technology," the Canadian mechanical engineer told CNN. "Traffic cameras have been around for years. But with the advancement of pilotless technology we now have new solutions to the basic needs in our public works systems, including in the area of public safety.”

According to the designer, police moto-drones would patrol the streets, scanning license plates and recording offenders using real-time video. When a violation is logged, “the drone could automatically issue citations via email, text message or even traditional post.”

“The technology behind these cars already exists," the report points out. "In November, a driverless electric racer completed a successful track test in Marrakech, Morocco. The battery-powered prototype was tested for a proposed race series where driverless cars will eventually compete on temporary city circuits.” (MotoGP drones with robotic riders? Life imitating video games?)

"But these police drones would require a big investment. You would need around $5 million, so they would need to be financed by a government organization," Bombardier said.

He is also working with Brazilian designer Eduardo Arndt to develop another new riderless motorcycle called the Brigade, “inspired by the geometric simplicity of racing motorbikes from the 1980s.”

A retro-style counterpart to the Interceptor, the Brigade still incorporates LED headlights and security cameras. Both machines are designed to use hydrogen fuel as well. However, it might make sense that electric motors would be a more realistic approach if the goal was to get these drones in place sooner rather than later.

"The cities of the future that Imaginactive works for will be less polluted. There will also be less road accidents, as driverless automated vehicles can be equipped with technology that detects technical failures such as oil leaks," said Bombardier.

Sci-fi fans might recall seeing a similar motorcycle drone in action in the movie Terminator Salvation. We have included the epic chase and battle scene below so you can enjoy the paranoid chill of the autonomous future we're all now facing...