New bikes in the Old West!

In Timerider a desert motorcycle racer gets lost, not just in Baja but in time itself, and runs afoul of local desperadoes in the old west. Thanks to his wits, his gadgets, and his riding ability Lyle Swan (Fred Ward) has the adventure of a lifetime and literally does the impossible. 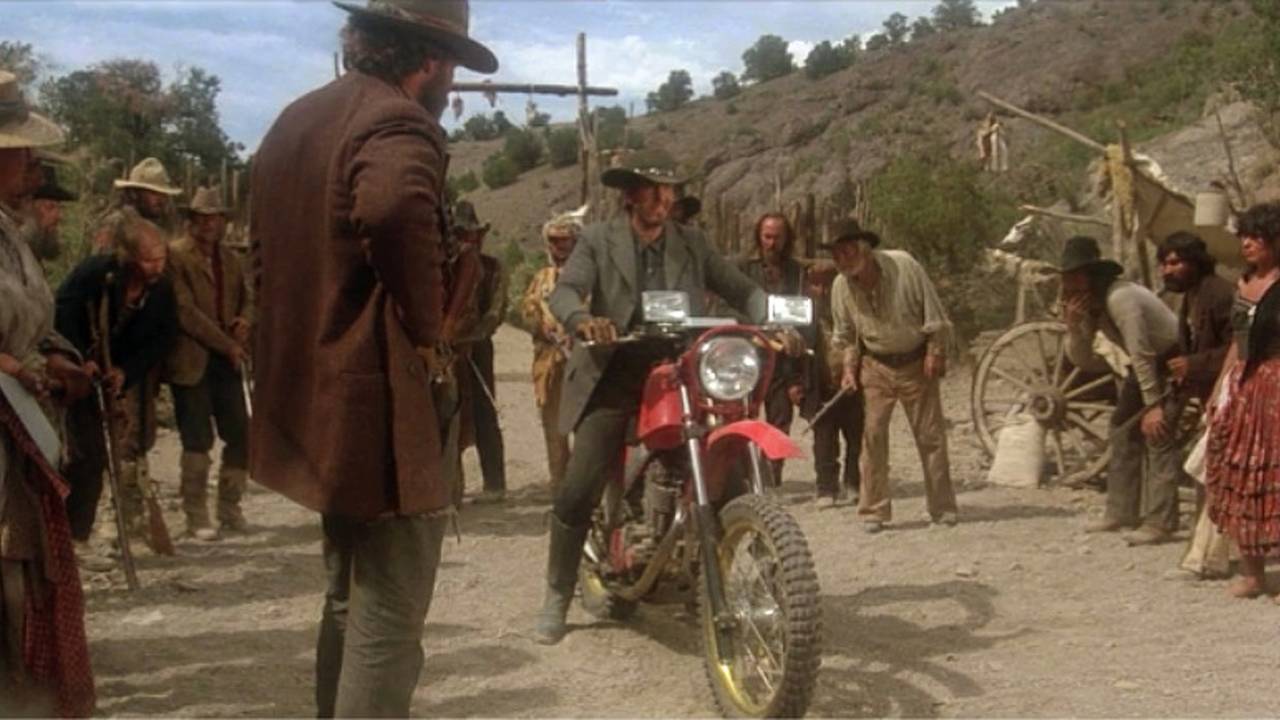 The full title of this movie is actually Timerider: The Adventures of Lyle Swann, and you will be forgiven for asking "Who the hell is that?"; Lyle Swann is no Indiana Jones, or James Bond. If you are a fan of motorcycles, or time travel, you will most likely enjoy this mashup of the two. If memory serves, a geeky 10 year old me saw this in theaters when it first came out in 1982, or at least watched it dozens of times on cable.

The plot is simple enough, at least compared to most time travel movies, much like Back to the Future, an unprepared everyman accidentally is transported to the past, only in Timerider Lyle Swann doesn't  realize it. For a guy who is way into the latest gadgets, Fred Ward's desert racer does not appear all that bright, though perhaps he can be forgiven for not jumping to the impossible but obvious conclusion. Once in the past, Lyle and his gadgets team up with a tough priest (Ed Lauter) and a sexy gunslinger (Belinda Bauer) to run off the baddies in a small village, like the guys in Magnificent Seven (the original, not the remake). 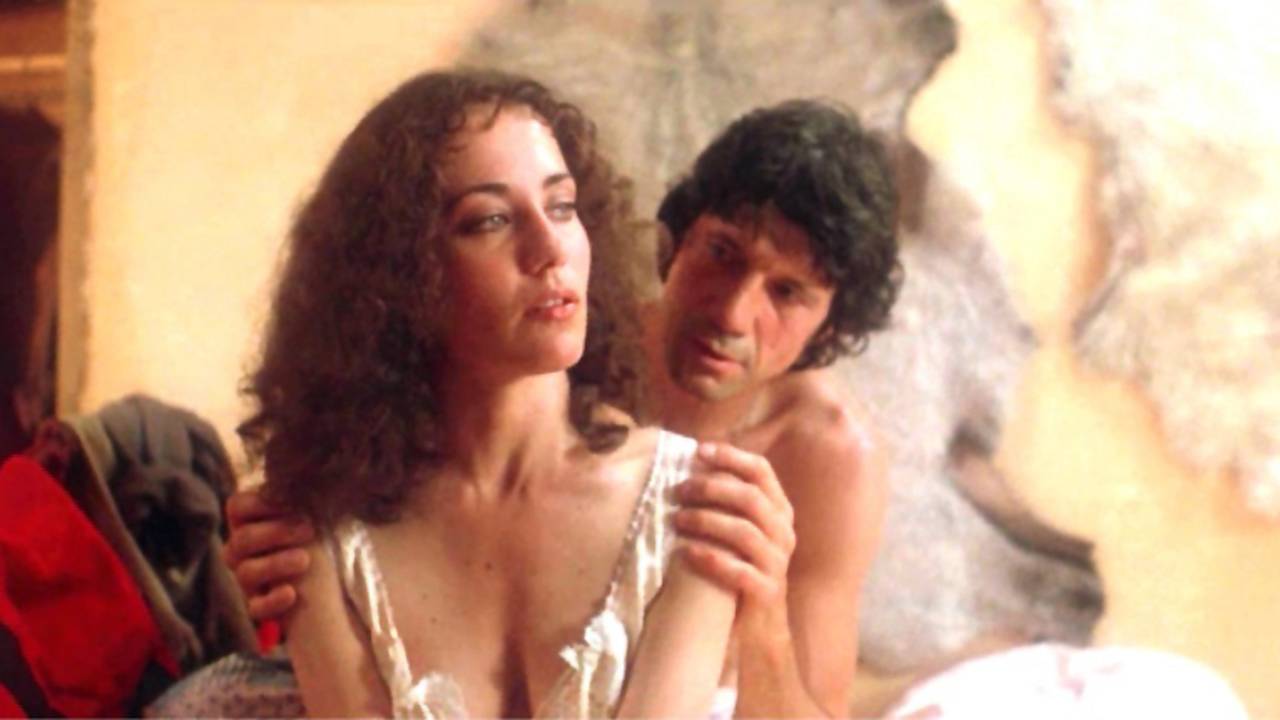 Fred Ward is certainly a tough guy, with years of boxing and a stint in the military when he was younger, but he just is no action hero. The real star of the movie though, is the motorcycle and the stunt rider; a custom Yamaha XT500 Baja racer and John Hateley, respectively.  When Lyle is out of his red leather suit and helmet he just doesn't cut it, but when he is throwing that bike around off-road he is a star. The stunt rider, and coordinator, was a former child actor, but more importantly a former AMA pro flat track and TT racer, who still races vintage occasionally. That probably explains why Mr. Hately, who is in his 60s now, was still performing stunts in Iron Man II, and the Lone Ranger in the 2010s. 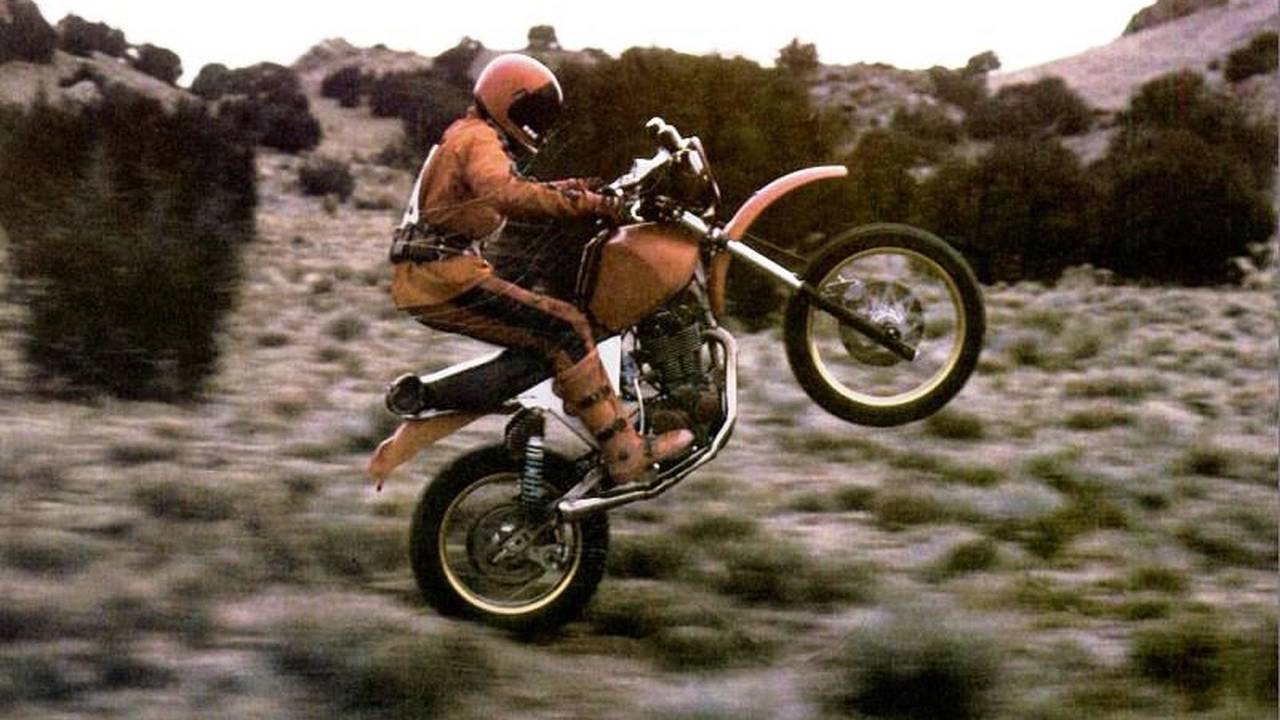 As for how the whole plot gets started, how Lyle Swann ends up in 1875, it involves getting way, way off course in the Baja desert and riding through a remote research outpost. White coated scientists in a bunker are feverishly working to attempt to send a monkey back in time, when suddenly a motorcycle appears out of nowhere. Incidentally, before the days of GPS and chase copters, riders would get lost all the time; J.N.Roberts famously got so lost in 1967 he road from the Pacific to the Gulf of California, across the whole peninsula, looking for the course in the middle of the night. The stuff about the time travel is less accurate though. 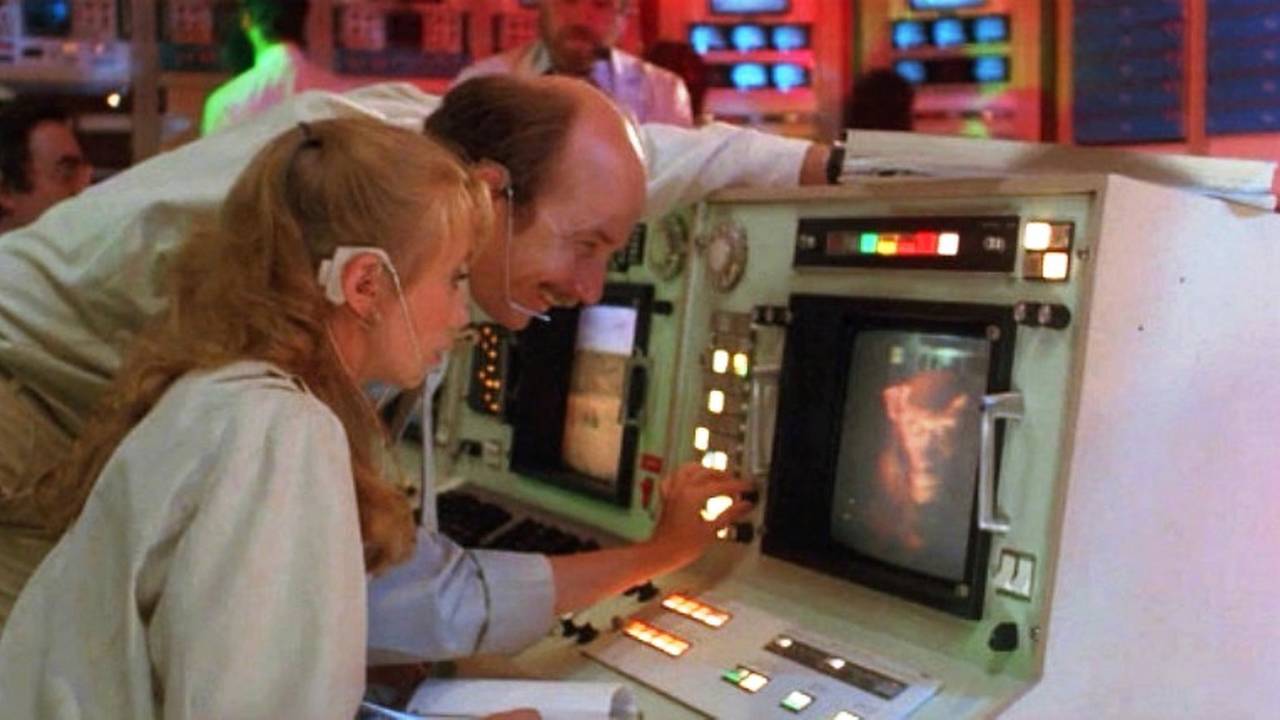 The time traveling monkey is one of two monkeys in this movie. Mike Nesmith, formerly of the band/TV show the Monkees, produced this movie, wrote the music, and wrote a good chunk of the screen play of this movie. Mike may not have played his own music or written the songs, but when it came to Baja he did his own driving, entering and competing in the race a few times from 1968 till the 1980s (At least one attempt, with P.J. O'Rouke as co-driver is in Drive Like Crazy). Not only does Mike know Baja, his music is pretty cool too. He even appears in it for a second as a race official; he is the one with the beard. 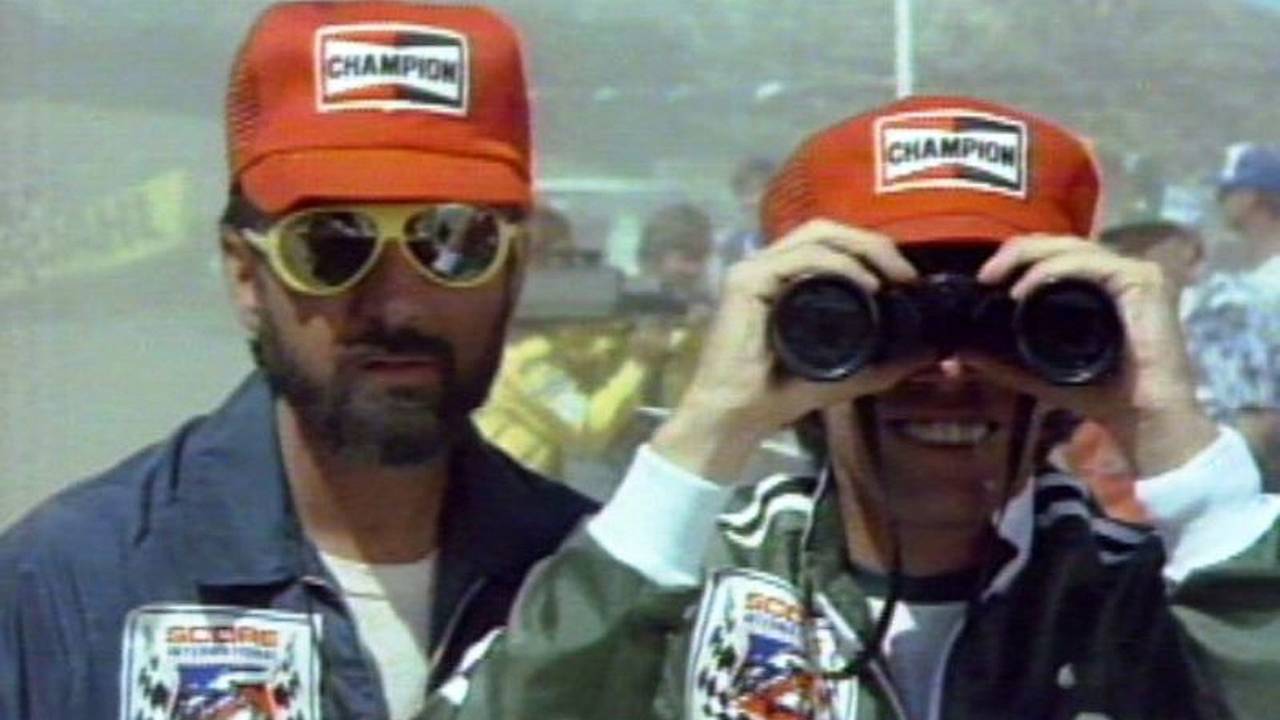 RideApart Worth Watching: Definitely! 7.5 out of 10. There are few decent off road centered movies, and except for the time traveling, this all seems very plausible.

Redeeming Quality: The riding for the most part, and the way all of Lyle Swann's sci-fi gadgets are now commonplace, or quaint. Navigation books on cassette tape! In helmet heads up display! Glo-sticks! Power Bars! CB Radio!

Of course, we still don't have helmet visors like in the movie that offer video enhancement, range finder, night vision and zoom. Get on that Skully. 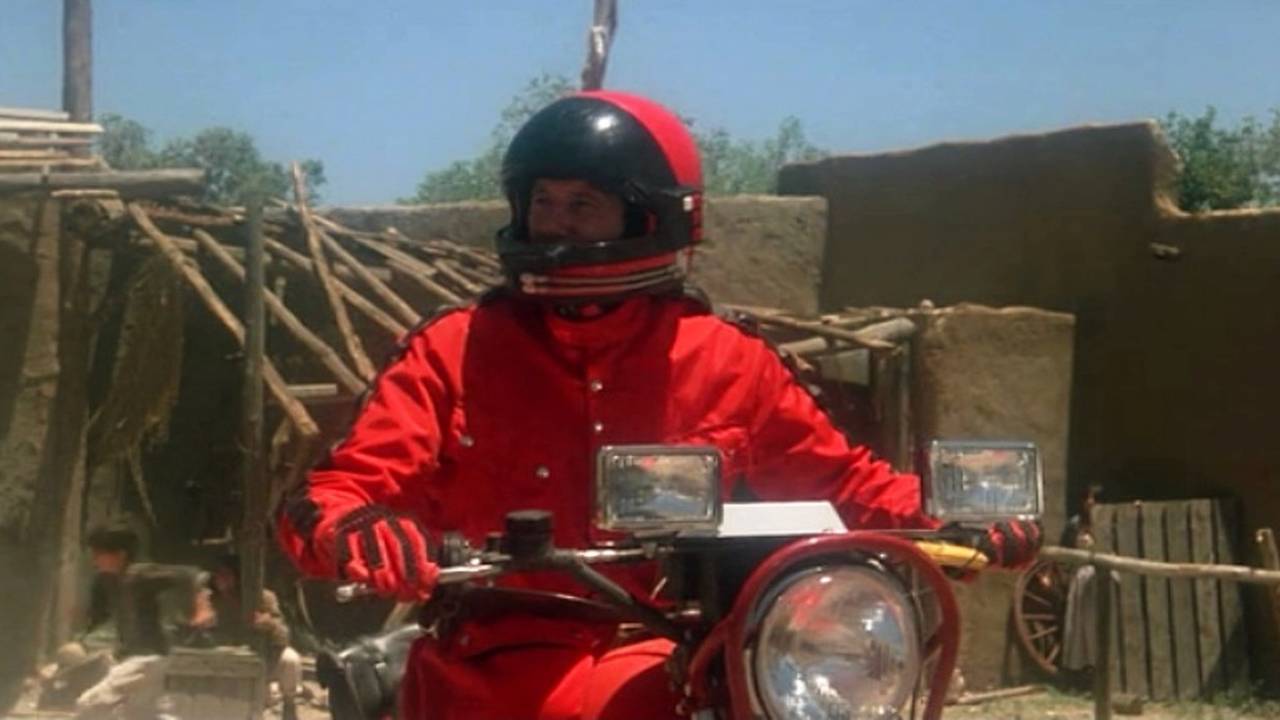 Worth Noting: Peter Coyote plays the head bad guy, and has fun with how absurd the movie is. My favorite part is watching these former Confederate soldiers try to kick start the big Yamaha single. This part seems even less plausible than time travel. Also, what little gas in the bike when he gets lost and travels in time lasts for days, so maybe this is a Hanukkah movie? 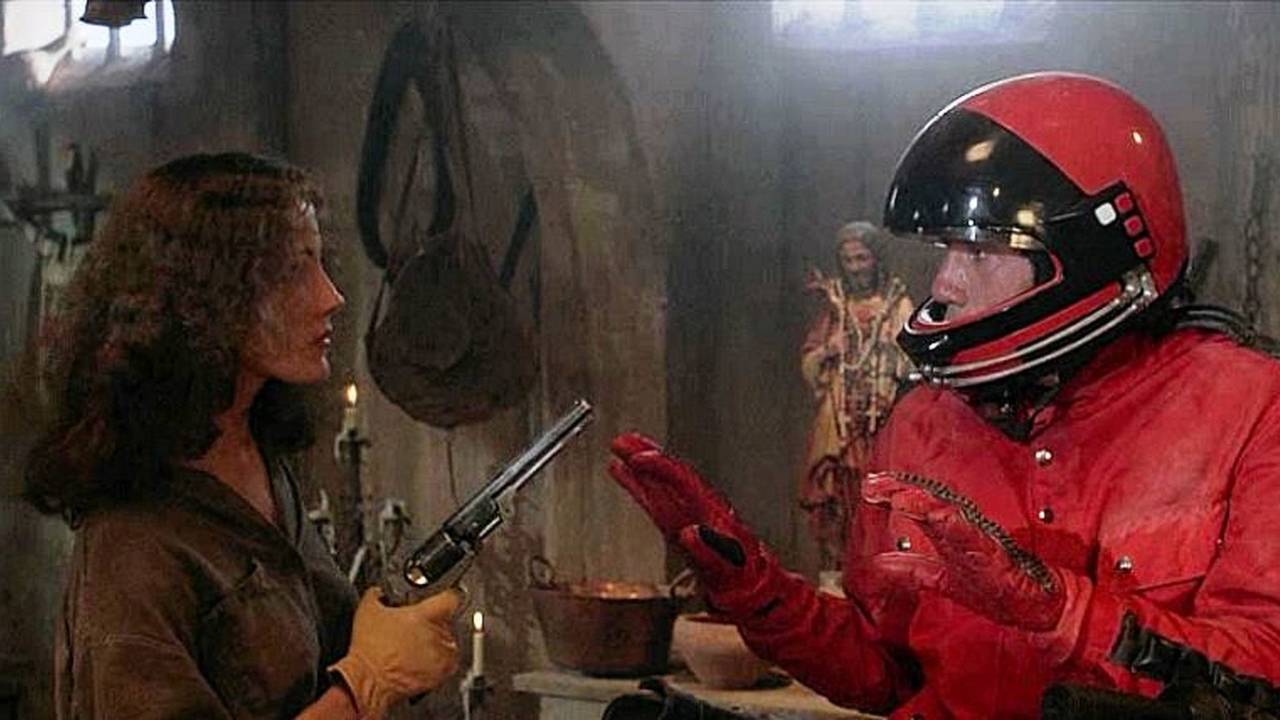 The story also ties it all up with several classic time travel paradoxes including the Mysterious Object Antecedents Myth as well another one I won't mention. You can watch the trailer below.

The whole movie is available to rent on Amazon, or for free on DailyMotion (at least for now). This would make a great double feature with the other motorcycles of the old west film Hex.