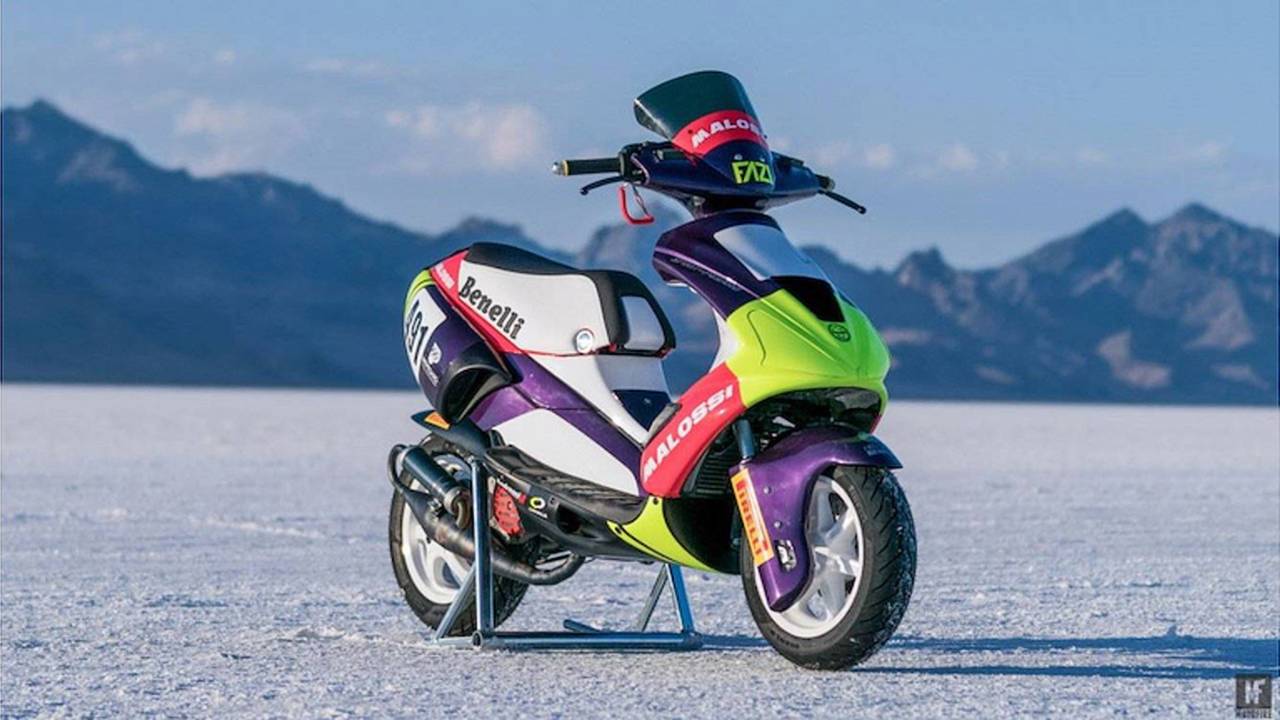 Scooter tires are rarely mentioned in high-performance terms, but good rubber is important on any ride. To prove that point, Pirelli teamed up with Moto Club Benelli and Malossi to set some speed records at Bonneville. Using three models of the Benelli 491, the Bologna-based Malossi speed shop set six new world marks for motor scooters.

The 50cc Benelli set two records at just over 71 miles per hour for the kilometer and the mile. The 85cc scooter scored likewise at 82.64 and 82.43 mph respectively, and the 100cc model ran over 88 mph on both runs.The engines were tuned by two-stroke master Jörg Möller. Project engineer Fabio Fazi logged the first two records achieved on Sunday, August 27. The scooters were fitted with Pirelli’s new Diablo Rosso tires and wore custom graphics by Aldo Drudi.

“I had been to Bonneville just as a spectator, but as a participant you learn how to know the hardships,” said Fabio Fazi. “I am very happy to have personally achieved the record in the 50cc category. The scooter performed great and now, after the victory, we only look forward to returning with the same machine to beat our own record.”

The next four World Records were set by former World and Italian Superbike rider – and now Sky Italia MotoGP commentator – Mauro Sanchini, who started his career racing scooters for Malossi in the 1990s.

“I am delighted for the great results we have achieved,” said Sanchini. “It has been a great experience in a place that every biker must experience at least once in life. Thanks to Pirelli, Malossi and Benelli and all the guys of the team for their efforts in making all the necessary changes for this strange track. When you ride on salt you really understand the challenge, which adds even more value to the records we’ve reached. Now the challenge is to improve the result!”

Testing Department Director of Pirelli Moto, Salvo Pennisi, who had accepted the original challenge from Moto Club Benelli, commented: “Chasing World Records is not new to Pirelli. Since 2000 we have achieved 21 World Records and with these six records we will enrich our haul! We were requested to participate in this adventure and immediately agreed. The timing was perfect considering the fact that this year we introduced the new Diablo Rosso Scooter tires and we were confident that their performance could play a vital role in achieving this challenging and passionate goal.”