58 Dudes on One Bike. What Could Go Wrong? 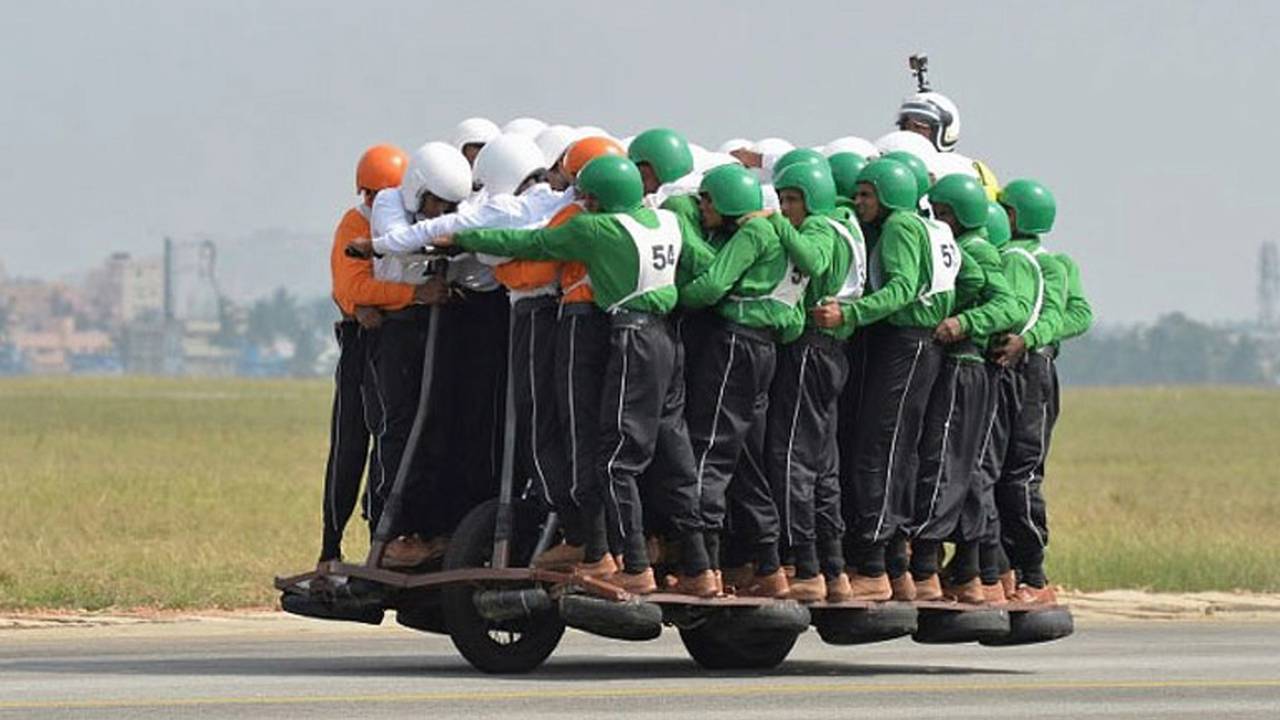 The Indian Army Service Corps' stunt riding team set a world record by packing 58 guys on a Royal Enfield then going for a ride.

I've ridden pretty deep before, but this is ridiculous

You guys ever hear of the Indian Army Service Corps Tornadoes? You probably have and don't realize it, especially if you spend any time on the internet watching weird bike videos. The Tornadoes are a motorcycle stunt team, and you've probably seen them doing stuff like climbing up ladders on moving bikes or stacking guys six deep on Royal Enfields. This week, the Tornadoes pulled off their most audacious stunt yet, and for their efforts they secured a place in the Guinness Book of World Records.

According to India.com, the Tornadoes set their new world record on November 19 when 58 guys rode a single 500cc Royal Enfield 1,200 meters – roughly 4,000 feet – at Yelahanka Air Force Station in Bangalore. To pull off this ridiculous stunt, the team mounted a bunch of running boards to the bike for everyone to stand on, with tires attached to act as bumpers. Team rider Subedar Rampal Yadav was at the helm, with a handful of his squadmates crowded around him. Team leader Major Bunny Sharma stood at the rear with a commanding view and a camera mounted to his lid. Yadav set off cautiously, picking up speed and more team members as the bike weaved down a runway toward the goal.

While watching the stunt itself is kinda boring – it's just a bunch of guys squeezed on to a slow-moving bike and there isn't a single crash – it's still pretty impressive. It takes a lot of practice and a lot of control to keep a huge mass like that upright standing still, let alone for a long-ish ride. How much practice? I'll let Major Sharma lay it out for you:

"For last 10 months, all 150 members of the team have toiled hard sacrificing sleep and family time to achieve this, making this 20th record by the team," Major Sharma told AMI. "Practice was important as it was to bring together such a large number of people on a constrained and most importantly a moving object."

READ MORE: 850km Motorcycle Trip Across 3 States in India - Video of the Day

Ten months, no sleep, and "hard sacrificing" for a world record. I don't know that I would have done it, but I appreciate that these crazy bastards are out there doing this for our entertainment.