UPDATE: Mini Bike from Dumb and Dumber Sells for $50K 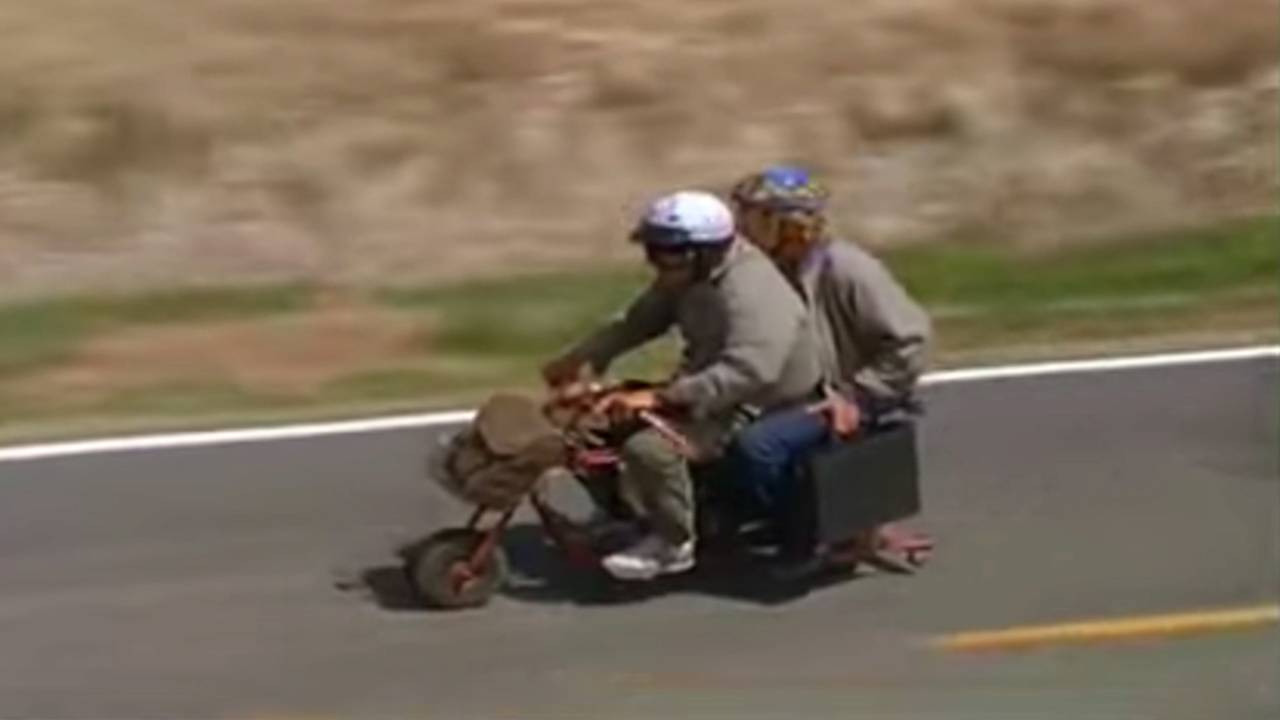 The minibike from Jim Carey and Jeff Daniels’ 1994 cult classic, Dumb and Dumber just sold for wildly more money than we could've imagined.

After another 6 days on eBay, mini bike from Dumb and Dumber sells for $50,000

UPDATE: While I thought the opening bid of $8,500 was wildly optimistic, I couldn't have been more wrong.

Last week we told you about how one of two mini bikes used in the making of 1994's cult classic Dumb and Dumber was up for auction on eBay. Within 48-hour of the auction going live, bidding had already jumped up to around $30,000. In the days that followed, bidding continued and the mini's price steadily climbed until Sunday afternoon when the 100th bid for $50,029.99 was placed and won. That's 30 bucks more than the MSRP on a brand new Kawasaki Ninja H2R. I have no words.

In 2010, one of the two Aston Martin DB5s Sean Connery’s James Bond famously drove in 1964’s Goldfinger sold at auction for $4.6 million. In 2011, Steve McQueen’s race suit from 1971’s Le Mans fetched more than $984,000 at auction. That same year one of the six DeLorean DMC-12’s used in the filming of 1985’s Back to the Future went for $541,000 on the auction-block. One of the Batpods—which were powered by 750cc Honda engines—seen in Christopher Nolan’s 2012 The Dark Knight Rises sold in 2016 for a whopping $406,184. Movie memorabilia, especially vehicles, can be worth a fortune, and sometimes the dumbest damn things can go for a surprising price at auction. Case in point,  the mini bike used in the 1994 cult classic Dumb and Dumber is currently up for sale on eBay.

SO YOU'RE: New Jumanji Movie Covers All Your Moto-Action Needs

While it probably won’t reach anywhere near the six-figure range that some of the iconic aforementioned machines have in the past, a minibike from the Jim Carey and Jeff Daniels comedy is already up to $30,000. That number is current as of the time this was written, and there are more than six days left before the auction closes. According to the seller; the mini two-wheeler currently for sale was one of two used in the movie, both of which were made by Sydney J. Barholomew who also designed the film’s famous “Mutt Cutt’s” Van.

Supposedly this particular example was used in all the movie’s close-up shots, and in a photo included on the auction’s eBay page, you can see at one point the mini was fitted with training wheels in back and then seemingly pulled behind a truck with a camera on it. The seller says they came into possession of the bike directly from Gordie Merrick, who served as Dumb and Dumber’s transportation coordinator. Again, according to the seller; one of the two minis was gifted to Merrick by the Farrelly Brothers after filming wrapped up, while the other was given to Planet Hollywood.

Since buying it, the current seller says they have thoroughly gone over the strange little two-wheeler replacing the pulley-belt, throttle and brake cables, carb seals, air cleaner, spark plug, and fuel hose, as well as giving the motor an oil change. The sale also includes all of the original parts in case the buyer wants to restore it to its cinematically-authentic form. Unfortunately, the frame was repainted to its “original color”, which I guess you could argue is a good or bad thing. But probably bad.

The sale of the supposedly “70-mile-per-gallon” scoot does include a helmet, bag, and briefcase like in the 1994 film, though none of the supplementary trio of props were actually used in the movie. Additionally, the sale also includes a signed and notarized letter of authenticity and a random assortment of spare parts—tires, chain, grips, etc. The bike is said to now be in “good running order” and is currently located in Houston, Texas where the seller says they can assist with shipping at the buyer’s expense. Lastly, 10 percent of the sale’s proceeds will be donated to the Best Friends Animal Society who operate America’s largest homeless pet sanctuary and provides adoption, spay/neuter, and education programs.

The opening bid started at $8,500, and as previously mentioned currently stands at $30,000. You can click here to see the eBay page for the auction which ends February 18. As someone who was never personally a fan of Dumb and Dumber, I say call me when the bike from Pee-Wee’s Big Adventure is for sale (Amen -JM).