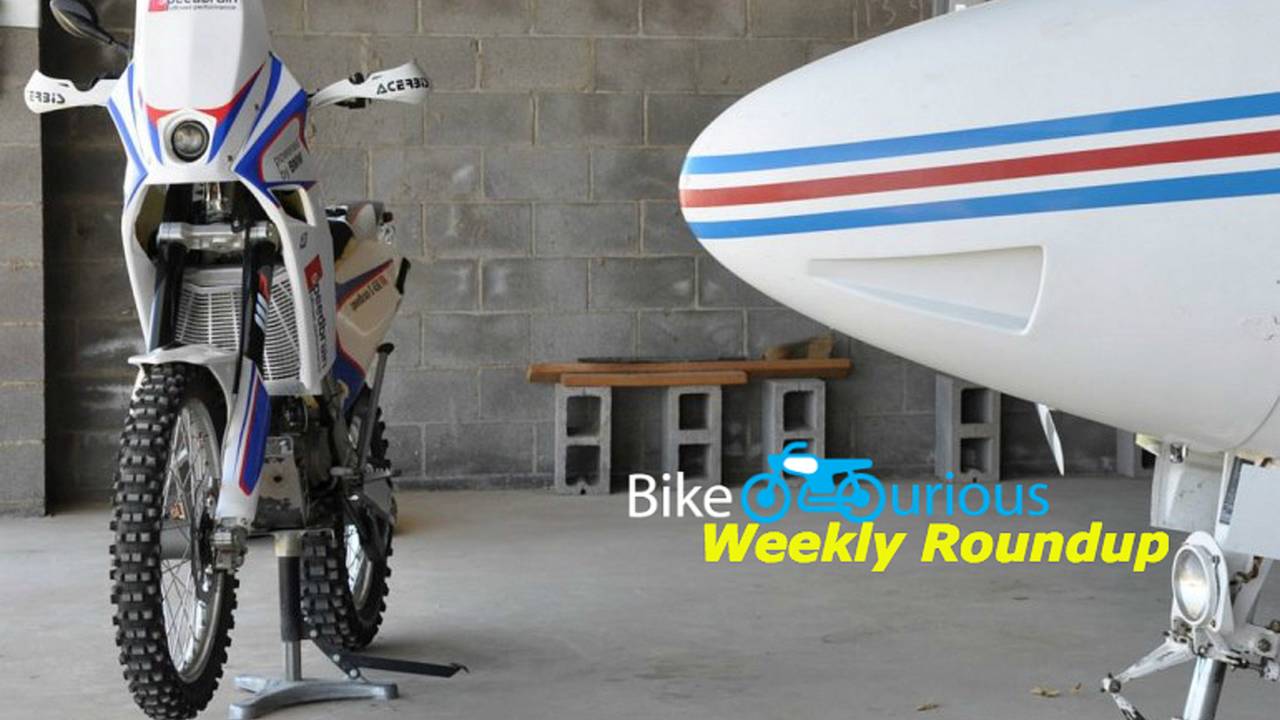 Ruttman offered options like a band brake, lighting, and even a "Ski-Trac" kit that would replace the front wheel with a ski for "all the fun of a snowmobile." The Wild Goose weighed 69 pounds and it had an automatic centrifugal clutch. This example was completely restored with new brakes, clutch, tires, controls, seat, and foot pegs—the frame and wheels are original. The seller says everything looks and runs as if the bike was new.

Find this Ruttman Wild Goose for sale in Roanoke, Virginia with bidding up to $227, with the reserve not yet met here on eBay.

The HP2 Sport, the R100RS Motorsport, and the R80G/S were all produced with some implied motorsports pedigree by BMW. This, on the other hand, is a completely different animal. This is an extremely rare BMW because it’s really hardly a BMW at all.

The entire package weighs about 320 pounds when the tank is full of gas, and you'll get a couple of sets of tires, a Tubliss system, GPR stabilizer, Garmin GPS, side bags, and a whole lot more. Depending on your weight, the seller has three different Ohlins spring setups, and there's plenty of additional parts—in the seller's words, "you really could start your own race team with all of the extras that I have available."

Here's a walkaround video from the seller:

Find this Speedbrain G450RR for sale here on ADVRider (registration required) in El Paso, Texas with an asking price of $18,995.

In the early 1900s, Excelsior and Henderson were two of America's best motorcycle manufacturers. Excelsior produced the first motorcycle to officially hit 100 miles per hour, while Henderson was producing the favored bikes of America's police officers. There's a reason for the similarities. Both companies were bought up by Schwinn in the 1910s, and were shut down in September of 1931 when the Great Depression crippled the economy. Fast forward 60 years to the Hanlon Manufacturing Company, founded in 1993. This Minnesota motorcycle maker secured the rights to both the Excelsior and Henderson names, and tried to capitalize on some American nostalgia with the Excelsior Henderson Super X, named after the 1929 model that is credited for being the first modern-day cruiser.

Production of the Super X started in 1999— only 1,952 were produced over two years. Unfortunately, and in a similar twist of fate as the companies that gave their names to this firm, the economy faltered due to the .com bubble and Excelsior Henderson couldn't secure the next round of funding they were expecting. The remains of the company were sold off, and production never resumed.

This example (VIN: 5EH1HCX00YB001618) has just 24 miles and it's adorned in an Olive Green and Oyster paint scheme. It was sitting for 15 years so the sellers replaced the battery, fuel pump and front tire. It actually had just 10 miles but the sellers put on 14 miles for testing. The bike is claimed to start easy and run strong. Find this Super X for sale in Spring Valley, California with a BIN of $6,999 here on eBay.

More of an evolution rather than a revolution, the Honda CB400F has one of the most distinctive exhaust systems ever produced— known by some as the "waterfall pipes." Though it wasn't as fast as its competition, this little four cylinder was smoother, quieter, and gave better gas mileage.

Featuring a relatively rare six-speed transmission, the CB400F was styled somewhat like a cafe racer and had an engine that produced 37 horsepower. Weighing just over 400 pounds, a rider could knock off the quarter mile in about 14.1 seconds. It's a basic, classic bike that would be just fine serving as a lovely daily rider, even at the age of 40.

This example (VIN: CB400F2006690) has 4,193 miles and was acquired by the seller at the 2013 Barber Vintage Motorcycle Festival—he's put just 192 miles on it during his ownership. During that time he replaced the tires, handgrips, and fluids, and "cleaned up some of the hardware." The seller says the paint is 100% original and that the bike is remarkably well preserved. Finding an example of the CB400F with the original pipes isn't always easy, so I give this bike some bonus points. You'll get the complete original tool kit though the lid of the tool tray is missing a small piece of plastic. Find this Super Sport for sale in Asheville, North Carolina with bidding up to $4,050 and the reserve not yet met here on eBay.

After Indian got a wake up call with the flop that was the upside-down Four, they went back to the inlet over exhaust arrangement for their Model 438, which featured completely enclosed valve gear and aluminum heads. Some consider this to be the finest, most collectible Indian ever built.

The 1,265cc engine produced 45 horsepower, good for a 95 mph top speed once you ran through the three speeds in the transmission. This example (VIN: 438512) was acquired in 2000 as a basket case and then restored over the next eight years. One hundred testing miles were then put on the bike before the restorer passed away. After that, the bike was put into storage. The seller acquired it a few months ago and he notes that everything works and it runs smoothly, but the tires have some sidewall cracks. The only other issues seems to be a late model oil pressure gauge, otherwise this is a solid restored example of a desirable bike.

Find this Indian Four for sale in Peoria, Illinois with bidding up to $53,100 here on eBay.