Vibrant, Absurd, And Everything In Between — Family Dirt Day 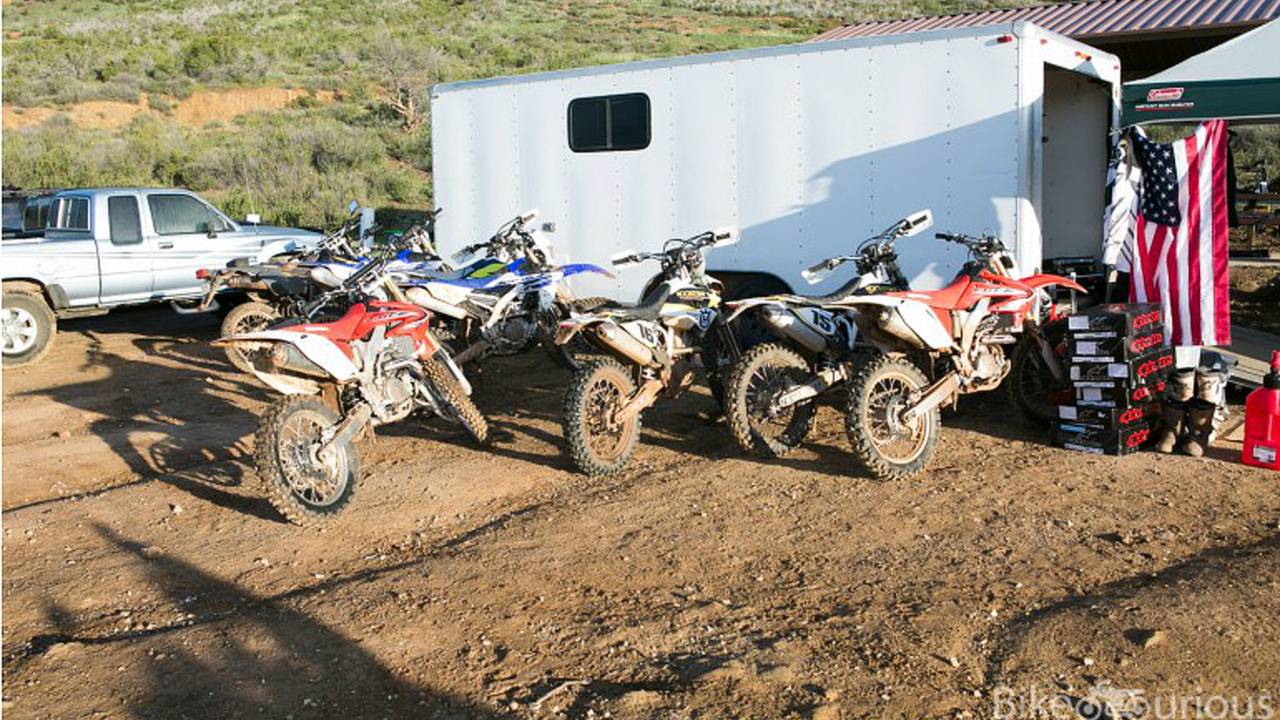 Family Dirt Day had a lot to offer, including the insatiable desire for more 450cc bikes...

Pro Tip: If you're invited to an event where the new 450s from Yamaha, Honda, Kawasaki, and Husqvarna are waiting for you to wail on, you find a way to free your schedule. Taking that sage advice left me staring at this lineup on Saturday morning, wondering which bike I should try first.

You may notice a lack of Team Green in the image above. Unfortunately, Kawi's KX450F motocrosser isn't exactly trail-friendly, and the local park ranger wasn't in what one would call a generous mood. Still, three great 450s to play around with ain't bad, so I hopped on the Husky and took it for a spin.

I picked the Husky first because I'm the happy owner of a 2007 KTM 450XC. Subconsciously I was hoping I would like the FE450 the most. Plus, I thought it was the best looking of the three.

A bit of context: I'm no dirt racing champion, though I have entered a few races and completed longer rides like LA-Barstow-Vegas. That being said, based on my humble experience, Husky was impressive right off the bat, with immediate power and comfortable ergos.

Next was the WR450F from Yamaha. If the Husky had immediate power delivery, then this bike was downright violent. I constantly found myself laughing inside my helmet as I tested the rotational strength of my right wrist.

Simply put, the power is addicting. I've never ridden a bike that made it this easy to loft the front wheel on command. Even better, the powerband is solid through the entire rev range. It feels like there's plenty of torque down low so you can chug and lug to your heart's content, but like I said before, give the throttle a good twist and you won't be able to stop yourself from smiling.

On the flip side, this is the only bike I had an off on that day. Turns out, it can get uncontrollably fast on single track very quickly! If I had to nitpick, I think the headlight/front fairing assembly is incredibly ugly, but a) styling is subjective and b) that's really my only gripe and c) you can't see it when you're riding.

The more you can cover in dirt, the less ugly it looks!

Lastly, the Honda CRF450X. I've never ridden one of these before, yet it instantly felt like an old friend—go figure, Honda. It was the easiest to ride right off the bat, though I was annoyed by the lack of instrumentation with the CRF; all you'll get from the factory is an odometer. With that said, Honda apparently took the money they saved from not installing digital instrumentation and put that towards including a steering damper from the factory, and I'd rather have the damper versus a speedo.

This presented me with a difficult dilemma. Because the CRF was easiest to ride, I was fastest on it from point a to point b. But the WR was more entertaining, and it's the bike I picture as I'm now at my desk a week after Family Dirt Day, daydreaming of tackling trails and pretending like I'm as talented as Jonny Walker.

We only got a few miles on each bike before Ms. Non-Generous Park Ranger shut things down, but if I had to buy one of these tomorrow, I'd get the WR. It's just too much fun. Well, if I'm really being honest— considering how few changes have been made to the CRF450X over the years —I'd probably save a couple grand and buy a two to three year-old example of the CRF, but well, that might not exactly be the point of this discussion...

The Husky ended up being 'middle of the road' for me: more vibrant than the Honda, but not as absurd as the Yamaha. If you have the cash and you're good enough to take advantage of all the Yamaha has to offer, grab yourself a WR450F— it was the most exciting option there. Now I just need to get my paws on a KTM 450 EXC...and a Beta 450RS...and a GasGas 450 EC 450F. Life is tough!