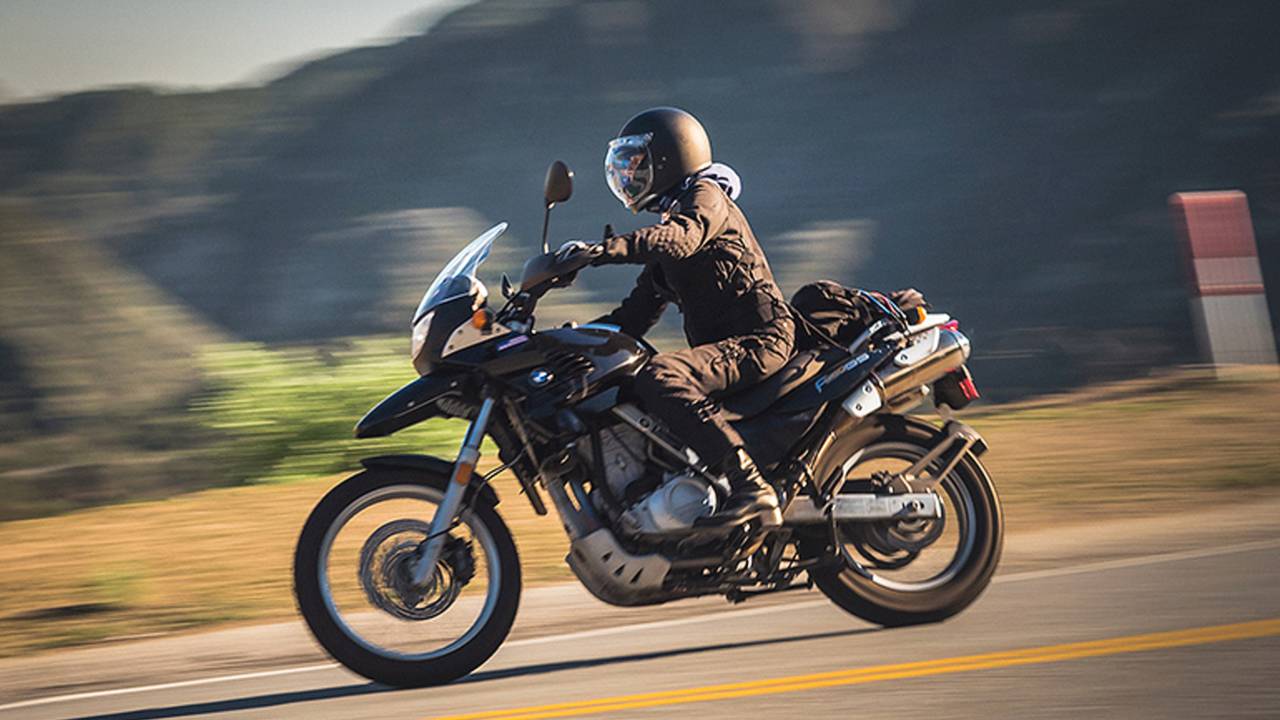 Graduating to a "Big Girl Bike" ain't easy, but it's worth it.

When it's time to step up to a new bike.

Riding my newly purchased BMW 650GS back from Long Beach to Los Angeles after months of indecision was like being released from my own mental prison: I had been tentative because my first motorcycle was such a disaster.

Before I left the shop, the boys there suggested I purchase and have them install some other things like a rack for hard bags, risers for the handle bars, then maybe take it to another mechanic and have him check it out. What? Hell no! That’s like buying a puppy and taking it to the vet, then to the groomer, then back to the vet again before actually gazing into its eyes and reminding the puppy how I vowed to take good care of her and give her a name and a home. I was hitting the road and the boys could just keep on tinkering.

As a rookie motorcyclist in Los Angeles, the choices for my first bike were vast and a bit staggering. I was influenced by many overly enthusiastic bikers seemingly attempting to kill me on say, a 1400 Suzuki Intruder (which I dumped), or the costly, gorgeous custom Dyna my friend schooled me on in a Home Depot parking lot (which I also dumped). I was uncertain as to the type of riding I’d enjoy and with only a handful of skills and a brand new license, this did not make for a confident buyer or rider.

Yet, I was antsy to learn and motor around on two wheels in this chronically-congested city. My Mom had just died and I was sliding into a horrible funk. My dear friend James P. and I had ridden together for years with me on the back. It was now an important balm when he picked me up and we would ride for hours. I cried in my helmet, I hugged him tighter than necessary, I prayed, I felt a death wish brewing and would fantasize about just falling asleep and falling off the back. Occasionally, James would reach around with his left arm and hold my leg for a moment.

I’d then feel the sun on my face, the smell of cut grass, the salt in the air and the warmth of my friend, and I found a smidgeon of gratitude seeping into my weary head.

After a few more months of riding and weeping James suggested that it was time I learned to ride. What a great idea for me in my sound state of mind to, um, accidentally run someone over. No way. Wrong, James. Bad idea. But then why was I smiling so much?

I was up most of that night watching videos about learning to ride and signed up for the safety class.

Within six weeks of having my motorcycle license, I bought a 2000 Suzuki 650 Savage for 1400 bucks. I didn’t even ride it home because I had rarely ridden on the streets, never used a turn signal, and well, I thought it best for my friend to ride it to my place.

The next day I was ready to ride in concentric circles around my neighborhood when the throttle cable broke. A few days later—once it had been repaired, of course—as I was riding in larger concentric circles to my friend’s custom shop, the bike stalled on Glendale Blvd, not a friendly road for any vehicle, running or not. I had to get towed to my friend. He shook his head and said, “Shoulda bought a Harley.”

A few more repairs and the stalling problem stopped. Then it started again. I mastered maneuvering my smoking, stinky, stalling-out bike at any given speed and any given time pretty well. I rode with a group once a week and that gave me the humbling reality check that my bike was not normal. Pretty much on a weekly basis a new issue would land me in the shop. I took this as a sign that I should just slow down and stay on top of my newly acquired lemon before I did serious damage to my fellow humans.

After even more money was poured into the machine I rode solo out to Joshua Tree. Holy crap, that was one scary ride, but I did it and felt exhilarated. I was building my confidence and skills, and my world was opening up. I hung out with friends for two days and then began my way back to Los Angeles; enjoying a ride through the park and exiting toward Interstate 10.

The winds were quite gusty and I had only gone 20 miles on the freeway before I pulled to a rest stop to gather my wits.

A Harley guy pulled up next to me and said, “Hey pretty lady nice scooter ya got there.”

“Uh yeah, it’s rather windy isn’t it? Am I leaning as much as I think I am? It feels as though I’m going to tip over.”

“You’re doing great. I’ve been tailing you for awhile. And yes, you’ll be leaning for another 80 miles.”

I felt nauseous with that bit of knowledge coupled with the intense elements pounding down on me. I’m such a moron, I thought. I started psyching myself out. Eventually, I pulled myself together and got back on the 10 and quickly fell into focus, but I wished I was riding on a dirt road with less annoying conditions. I grew up on a farm and was often encouraged by my father to ride tractors, go-carts, mini-bikes and drive his muscle cars. Of course, this mostly took place in fields and rural roads, so dirt is comforting to me. Going slow and taking in the world has always comforted me.

I was careening at 80 mph, which is top speed on my lemon for another 10 miles when suddenly the bike starts blowing out blue and black smoke from all sides. I get splattered with hot oil from head to toe and pull over. I leapt off the bike thinking it’s going to explode—I was beyond miffed. I just ruined my bike a 130 miles away from home. Maybe my nightmare of getting abducted by a meth-head in the desert was about to come true. Things could always get worse. This biking hobby has me obsessed with how to survive, how to remain calm, how to ask for help, how to use my instincts and how to know when to bail. I had little time to fester over the loss of my mother (not to sound like an asshole).

By the time the tow truck driver arrived I looked like a parched coal miner. Two hours of this man yammering gory stories about accidents and how dangerous motorcycles are was enough to make me want to punch him in the face. Instead, I politely asked him to not talk about that stuff. We arrived at James’ house after dark and parked my bike in his garage. I felt so defeated. My festering sadness transferred to the loss of fun and being trapped with my real world issues of living as a responsible adult—which sounds bratty because it is.

The bike needed a top end rebuild. While it was in the shop, I test rode or borrowed a number of motorcycles: a 1980 Honda 900, the Harley Forty-Eight, the Motto Guzzi V7 Stone, a Yamaha V-star, but nothing grabbed me except the Honda.

The more I experimented, the more I found that what I enjoyed was the solitude and the easy access to nature. Clearly I needed a more reliable, sturdy bike that could take me off road; take me to that serene place I so desired, that place inside of me that gets lost when life gets thick. I find I’m rarely lonely while riding. There’s always unprompted meditations, animal sightings, a long tunnel (which for some reason makes me so giddy with joy that I meow in my helmet, that’s right I meow), far off city lights or a friendly wave from a passing motorcyclist.

And yes, I have since found a new love and teacher in the BMW 650 GS. It’s exactly what I wanted: A respectable enduro bike, or, as my friend Jimmy insists, my "big girl" bike. It feels safer, I sit up higher, though I can still flat foot it at stops, it handles smoothly and is quicker than the Suzuki. It’s funny how my chronically broken motorcycle led me to a more resilient self, and a resilient new BMW. I’m ready for more adventures, and in the past year and a half, I’ve met some pretty awesome female riders that have the same love for getting dirty.