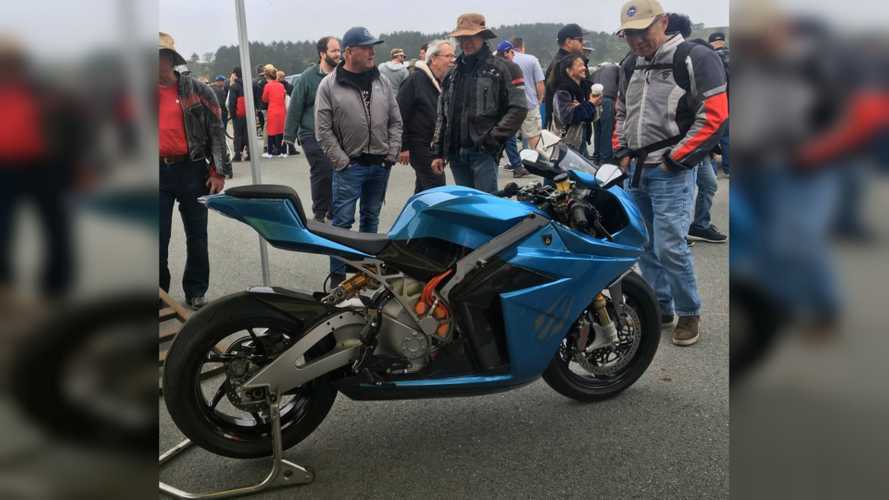 There wasn't any dancing though, sadly.

After its official launch at the end of March, the long-awaited Lightning Strike has made a public appearance and we’re excited. They promise that they’re still on track to begin delivering pre-orders of its “Carbon” edition in July. Until then, we get these little sneak peeks.

The bikes were on display at the Pacific Coast Dream Machine event on April 28 at the Half Moon Bay airport in California, which is a show for bikes, cars, trucks, airplanes and other interesting machines. The bikes were not there for test rides, only for display. There were at least two of them there, in blue and black.

The Strike will be available in three editions, the Standard, Mid-Range, and Carbon. Each upgrade gives the bike a stronger battery and a longer range, and of course a slightly bigger price tag. Still, the Standard edition which will have a 70-100 mile range should retail for just under $13,000, and the Carbon edition which has an advertised 200-mile maximum range has a price tag of just under $20,000. They’re not super cheap but they certainly come in well under Harley-Davidson’s much-touted offering, the LiveWire: that bike is set to retail for just under $30,000.

As electric motorcycle technology gets better and more popular, prices will come down. Currently all of Lightning’s component production is in China, just south of Shanghai; those components are all shipped to the United States and then assembled fully in Lightning’s facility in San Jose, California.

While it may seem that there’s a new electric motorcycle being introduced to the market every week, we’re not seeing them in dealerships or on the road very often; this is the precipice of electric motorcycle popularity. Cars came first and, for instance, Tesla’s popularity can’t be ignored. Motorcycle components must all be smaller and lighter, so the technology comes along a bit slower, but mark my words, they’re absolutely on their way, and there will be a landslide.

We’ll be keeping a close eye on Lightning and all the other electric motorcycle manufacturers as they pop up and gain momentum, and we’d love to hear from any of you who have test-ridden or purchased an electric motorcycle. What did you buy and why? What are your experiences with ownership? Have you pre-ordered a Lightning?