Is This The Exhaust System For A New Suzuki Hayabusa? 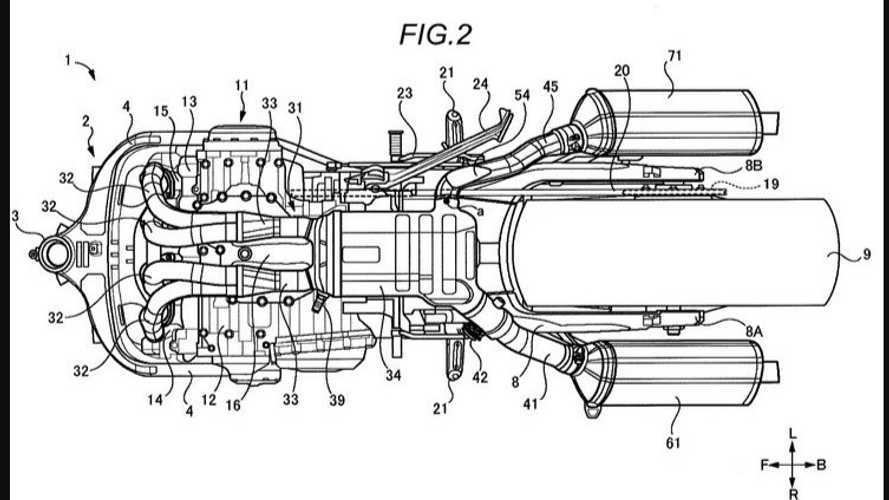 Suzuki Seems to be filing patents for some new Hayabusa designs!

By now, we have all heard the news, some with no small amount of grief and some with indifference, that Suzuki has stopped sales of its flagship road missile, the GSX-R1300—more commonly known as the Hayabusa—in Europe. New Euro4 regulations have killed off the erstwhile king of sportbikes there. Gasp, but wait! Fans of the hypersport motorcycle might have some rejoicing to do. It seems as though Suzuki has filed some new patent schematics which may point to a resurrection of the beast, or at least its next iteration.

All we have so far are schematics for a new 4-into-2 exhaust system, but they’re interesting, to say the least. They do give us some clues about Suzuki’s plans; it is exciting to have a few details about the new bike.

The common arrangement for exhaust systems on big-displacement bikes are the 4-into-2 we see in these schematics. Manufacturers are very specific about the design of their exhaust systems–the EPA as well as global emissions regulations determine the allowable noise and particulate permitted by the bike. Manufacturers must strike a delicate balance between engine performance and emissions. Suzuki has achieved that balance in their new, updated Hayabusa exhaust system with an asymmetric design in order to optimize gas flow and minimize noise and emissions. The right side of the system has a larger diameter, straighter pipe; the left side pipe is smaller and has more bends in it. There also seems to be an exhaust gas valve which only opens at higher revs – at lower revs, all four cylinders’ exhaust gases are routed out the left can. That design keeps the bike quiet at low revs, and when the valve opens, lets the bike roar.

We are waiting rather impatiently for some leaked photos of the redesigned bike in its entirety – will it keep the traditional wind-tunnel-driven swoopy design we’ve all come to know? Or will the designers at Suzuki opt for something with a broader appeal, trusting the enormous motor to overcome any wind resistance with aplomb? The Japanese manufacturer’s timing of the patent filings probably means we’ll all need to be patient; development takes time and we probably won’t see the next Hayabusa until 2020 or 2021.