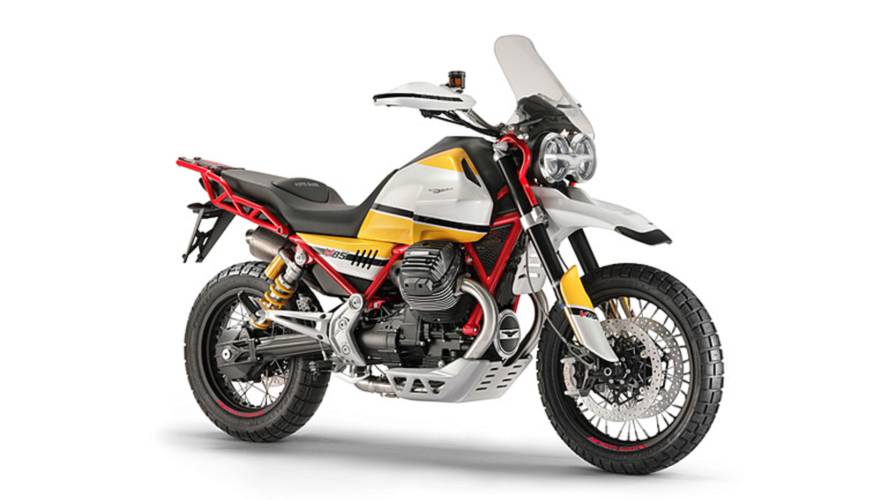 Moto guzzi unveiled the new Concept V85 enduro at EICMA 2017, and it's quite a looker.

An exercise in character, lightness, and ease of use (apparently)

Back in 2007, Moto Guzzi stormed into the big-boy adventure bike market with the Stelvio 1200. The big adventure bike was compared favorably to other adventure-touring bikes like BMW's R1200GS and Yamaha's Super Ténéré, and it quickly gained a devoted following. Sadly, Guzzi's parent company Piaggio decided to axe the Stelvio, and it's Aprilia stablemate the Caponord, last year at EICMA. The company claimed that bringing the bike's engine up to Euro 4 standards was too costly, and so the mighty Stelvio was put out to pasture.

Fast forward to this year, when Guzzi pulled the cover off the new Concept V85 adventure bike at EICMA 2017. More an enduro than a big adventure bike, Guzzi is being tight-lipped about the V85 so we don't know a whole lot about this sexy new Italian. What we do know is that it slots in somewhere between the V7 and V9 families and Guzzi's 1400 cruisers like the MGX-21, and is designed to fill the gap in their lineup (and in our hearts) left by the departing Stelvio.

At the heart of the V85 is an updated "small block" 850cc v-twin sourced from the V9. In typical Guzzi style, the engine sits athwartships in the lightweight steel frame where it acts as power plant and stressed member. Up front is an inverted fork of unknown provenance, and the rear sports an aluminum swingarm that, as Moto Guzzi said in their latest press release, "has a curved shape on the left side, useful for designing a highly linear exhaust pipe pattern so as to minimize the lateral dimensions."

“It is the motorcycle that was needed by an increasingly standardized market dedicated to traveling in its purest form, recalling the epic rally raids of the 1980s, a point of reference from which it inherits style, charm and thus emotion, but which has been designed to take on both everyday routes and long-distance routes, using the most up-to-date requirements.”

That's a lot of words to say, basically, "Here's a fancy new Euro 4 compliant enduro for you, paisans. Enjoy!"

“The Concept V85 is dedicated to those who, while never ceasing to dream of Dakar, yearn for a bike that revives the spirit of adventure on their daily journeys," Guzzi stated in the press release. "The Concept Moto Guzzi prefigures a modern motorcycle, fully equipped and with a strong character, but also a pure and essential motorcycle with its shapes that originate directly from Moto Guzzi’s own history.”

I'll admit, unlike some people around here (*coughChriscough*), I like the V85 despite the fact that I'm not really an enduro/adventure guy. It's a handsome bike with the red frame and white and yellow body work, and it definitely looks the business with those meaty tires and off-road gubbins. When we find out more about Guzzi's new enduro, and you know we will, you'll be the first to know.