Is it the best of both worlds or just a compromise?

The mid-size sportbike market is a tale of two models. On one end of the spectrum, we have the Yamaha R6—powerful, compact, quick, and unforgiving. In the opposite corner, Kawasaki’s Ninja 650 holds court—friendly, relaxed, quick (enough), and quite forgiving. The chasm between these two bikes shapes the middleweight landscape and just begs for a bridge between supersport and street bike.

Aprilia’s lineup is a tale of two models as well. The RSV4 is brutally fast, technologically-advanced, and a proper handful. Conversely, the RS 150 is light on its feet, technologically adequate, and easy to handle. Enter the RS 660. It’s compact and relaxed. It’s fast and easy to handle. It’s friendly and technologically-advanced. Aprilia’s new shiny toy simultaneously fills the gap in the brand’s range and the 600cc sportbike field. Is it the best of both worlds, though, or just a compromise?

At the intersection of superbike and beginner bike, between top MPH and top MPG, Aprilia hopes its middle ground middleweight can stake a claim in the market. After a full day of street cruising, freeway blasts, and canyon carving aboard the RS 660, this is where we think it has the edge.

Piloting an on the road can be an art form. Once spooled up, the engine screams like a TIE Fighter toward its 16,000-rpm ceiling, but it sure makes you work to get there. Luckily, inline-fours aren’t the only platform in the middleweight class. The found in the Ninja 650 is more tractable on the street but only musters 68 horsepower due to its 9,500-rpm redline.

That powerplant polarity leaves most intermediate sportbike buyers choosing between raw performance and road comfort. With the RS 660’s liquid-cooled, DOHC parallel- twin, Aprilia aims to capture both. Starting with the RSV4’s 1100 Factory motor, the Noale engineers sliced off the rear-facing cylinders, lengthened the stroke to achieve 659cc, and installed new heads. The result is a track-worthy mill that’s at home on the road.

With 80 percent of its torque available at 4,000 rpm and 90 percent coming in at 6,250 rpm, the RS 660’s pull only lets up after achieving peak torque (49 ft-lb) at 8,500 rpm. Unlike an inline-four, I could lug the twin around town. If I missed a downshift into a corner, the low-end torque saved my exit drive. When caught behind a caravan of cars, I short-shifted and loped along with minimal vibration. The new twin was easy-to-use yet responsive, agreeable yet aggressive.

Beyond 7,500 rpm, the RS 660 took on a different demeanor. The throaty exhaust note became a wail. The normally linear power band rushed toward its 100-horsepower peak at 10,500 rpm. No, the RS 660 doesn’t achieve the R6’s 118 horsepower or the Ninja ZX-6R's 130-horsepower rating, but do you miss it on the street? The answer was an emphatic “no”. While we were only fortunate enough to try the new RS 660 on the road, Aprilia’s electronics suite points to the RS 660’s track potential.

When it comes to electronic safety nets, most 600cc sportbikes receive rudimentary rider aids. If they do feature or cornering , the systems typically lack the sophistication and options found on their literbike siblings. That’s not the case here. The RS 660 leverages the RSV4’s electronics package and enters the segment already ahead of its Japanese counterparts.

Aside from reducing the anti-wheelie mode to one setting (the RSV4 has three), Aprilia included three levels of engine braking not found on the lauded superbike. Add that to eight levels of traction control and three cornering ABS configurations, and you have an electronics package fit for a race machine. For that reason, owners can only access Race mode by changing the settings in the menu. Road includes Commute, Dynamic, and Individual (customizable) riding modes and the Race side unlocks Challenge and Time Attack (customizable) maps. 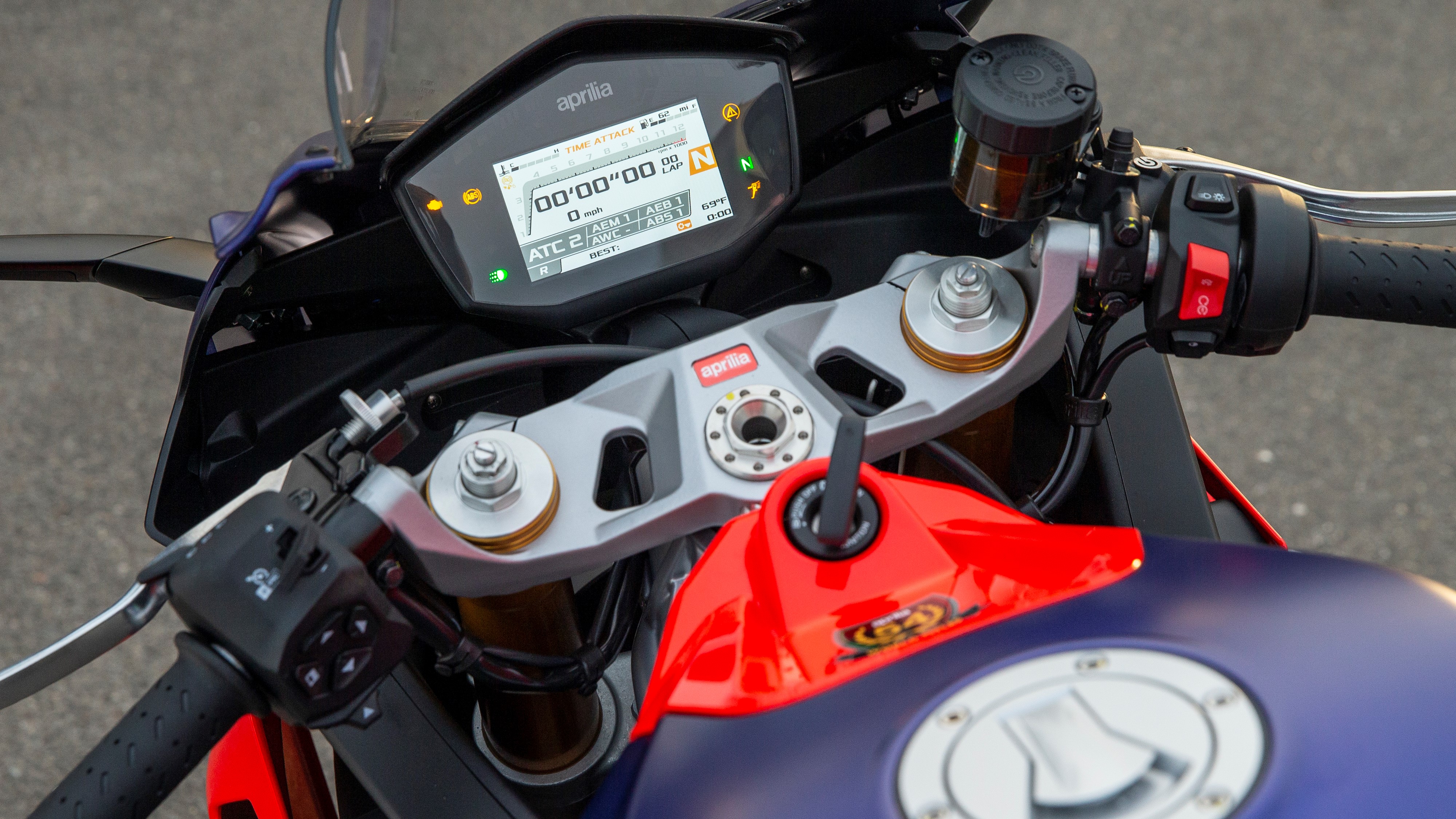 Despite the robust electronics suite, navigating the system was effortless. Ride modes changed with the press of a button on the right-hand control. Flicking through advanced settings with the left-hand switchgear was a breeze as well. Working similar to a computer folder system, the right arrow opens more options and the left arrow returns to the previous screen, which delivered a familiar and seamless experience.

The full-color TFT dash clearly displayed all the pertinent information for the road and dedicated track layouts were available once I switched over to Race mode. That duality helps the new middleweight straddle the line between commuter and racer, between canyon carver and track rat. Yes, the RS 660 is chockful of technology, but that doesn’t mean it’s hard to use or intrusive. The electronic suite is the new benchmark for modern middleweights and its what 600cc sportbikes deserve in the future.

When Aprilia set-up the seating position for the RS 660, it looked to the market for guidance. The R6 felt too aggressive for the street and the Ninja 650 seemed too relaxed for spirited riding, so the Noale factory split the difference. The RS 660’s pegs are lower than the Yamaha’s but higher than the Kawasaki’s. The bars aren’t clip-ons, but they don’t sweep up toward the rider either. Combine that with the 32.3-inch seat height and the rider triangle promotes comfortable cruising without sacrificing the ability to toss the RS 660 into a corner.

Aprilia believes that its Goldilocks ergonomics hit the “sweet spot” for the segment, and after a full day in the saddle, we can’t argue with the results. The legs tuck under the rider, but at a less acute angle. Weight doesn’t bear down on the pilot’s wrists as much. The seat is wide at the rear and narrows toward the front, allowing easy flat-footing at a stoplight. Only after an elongated blast through the local canyons did my knees start to ache. However, if you’re not hanging off the bike for an extended period, the RS 660 won’t leave you icing your joints.

With the handlebars integrated into the top yoke, my wrists never grew stiff. It helped to lean on the gas tank for from time to time, but even with both hands on the bars, the position never felt overkill for the street. No, the new Aprilia isn’t a sport-tourer, but one could easily ride the RS 660 for several hundred miles without fear of developing arthritis.

Thanks to the slim subframe, cast wheels, and load-bearing engine, Aprilia’s latest offering weighs in at a svelte 403 pounds. With a lower curb weight than all five of its competitors, the RS 660’s compact design prioritizes handling and corner speed. It tips side-to-side with little input. It holds a line with predictability. It brakes with consistency and linearity. While some feel that the lower-spec Brembo calipers are a letdown for a supersport, the package is more than enough for the lightweight RS. By the end of the day, I learned that I could lightly brush the brakes upon corner entry and still make a tight radius corner.

Despite its light fighting weight, the RS 660 feels remarkably stable at speed and at lean. The 59.3-inch wheelbase helps in this department but doesn’t ruin the bike’s agility. The steering is quick but not twitchy. The chassis is rigid but not harsh, which is a surprise due to the lack of rear suspension linkage. To shave as many ounces as possible, Aprilia mounted the KYB monoshock directly to the swingarm, but it doesn’t ruin the ride quality or responsiveness. Undoubtedly, some will accuse Aprilia of just cherry-picking its competitors’ strengths, but the Noale brand is also innovating with the RS 660.

Modern sportbikes take aerodynamics to a new level. It’s no longer a superbike if it doesn’t have bi-plane winglets. Honda’s introduction of the CBR1000RR-R SP proved as much late last year. While MotoGP bike design trickles down to the consumer market, the majority of riders won’t reach speeds that require the downforce created by fairing winglets. Sure, they may look cool, but Aprilia had something more useful in mind when it came to the RS 660’s bodywork.

Adopting a double layer fairing, Aprilia’s new sportbike amplifies airflow without sacrificing aerodynamics. Rider comfort is the main priority and the air stream created by the gap in the two-layer fairing shuttles hot air off the engine and away from the rider. The slit also protects the rider from oncoming air pressure, and in our opinion, looks a lot less goofy than modern winglets. 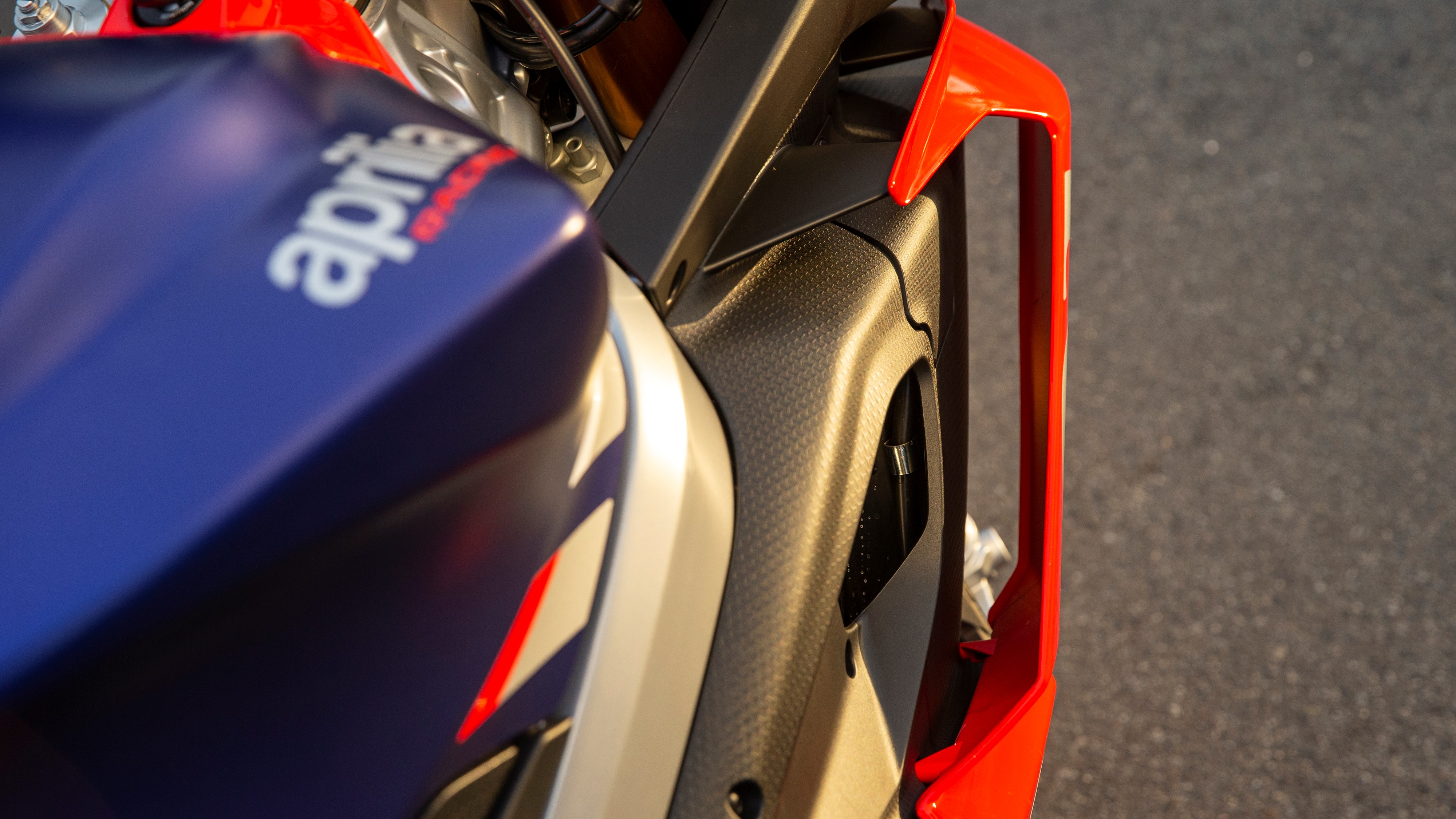 Aboard the RS 660, you can place your hand near the fairing and feel the air streaming through the open slot. Though the daytime high was only 71 degrees when we tested the Italian sportbike, engine heat never became a factor thanks to the body panels re-directing oncoming air onto the motor and deviating it away from the rider.

While Aprilia claims the RS 660’s prioritize comfort over top speed, the rider bubble is more than sufficient. In full tuck, the windscreen met the crown of my helmet, sending rushing air over my back and past the bike’s tail. I won’t comment on the speeds achieved on the RS 660, but I can say that they weren’t impeded by the aerodynamics.

Aprilia set out to find the happy medium in the middleweight sportbike field. It wanted the comfort of a sport-tourer and the performance of a . For the most part, the company achieved the brief. The RS 660’s engine can lug along at 3,000 rpm or whip up 100 horsepower at the flick of a wrist. Its personality can switch between Road and Race. Its light curb weight and updated ergos make it easy to handle while still qualifying as high performance.

Other than the abrupt quickshifter (mostly in lower gears or lower rpms) and a few idle hiccups upon startup, our time with the RS 660 was more than memorable. Even with those small ticks, the RS 660 was a gem. We should also note that we rode pre-production models and Aprilia’s reps assured us that its engineers would work out the kinks before the model hits showrooms floors.

When that happens, some will say that Aprilia hit the mark, others will say that it missed it, but we think Aprilia’s created something entirely new. Something that not only fills a gap in the mid-size sportbike market but will fuel model development at Aprilia for years to come. Can you say Tuareg, Tuono, and Trofeo?...

The Wait Is Over: