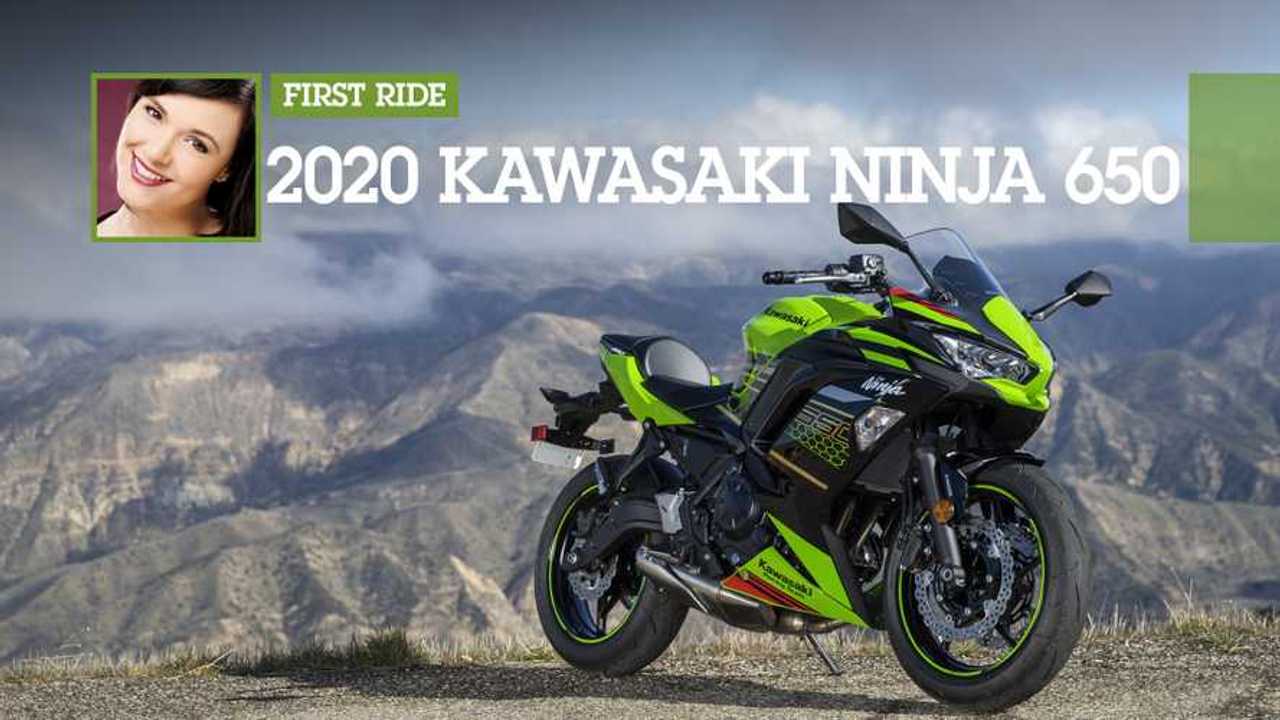 Ticking all the boxes.

Ninja is one of the names that resonate the most in the motorcycle industry. It has the highest chance of getting people who know nothing about bikes to nod and while they might not remember exactly what it looks like, the name alone usually rings a bell. Through the decades, the Kawasaki Ninja has become a staple in the Japanese sportbike segment. Today, the Ninja lineup is one of the most expansive sportbike families in the industry with nine models proudly wearing the badge.

For 2020, Kawasaki improved its famous lineup by upgrading the 650 and 1000 models. To highlight all the upgrades it did on its midranger and give us a taste of how they translate on the road, Kawasaki invited a handful of writers to Santa Barbara, California to check out the updated 2020 Ninja 650.

So, what exactly is new on the Ninja 650 for 2020? The list of changes isn’t very long but it’s just enough to bring the model into the new decade and hopefully strengthen its position on the market.

The design builds on all the improvements introduced in 2017 in terms and fits and finishes. This time, Kawasaki added some drama in the lines, following the aesthetic guidelines featured on the Superbike World Championship ZX-10R. The nose is more sculpted, the flush-fit windscreen is lower and wider, and the dual headlight is made to look more aggressive.

Behind the shield, the 650 features a new 4.3-inch TFT display—the first time Kawasaki includes the feature on a mid-range model. The digital instrument cluster allows the rider to personalize the information they wish to look at and the system can now be paired with Kawasaki’s Rideology app via Bluetooth.

All the pretty colors.

At the back, the saddle design is also new with a thicker, cozier backrest and rear seat. The upswept tail ends on a swanky x-shaped taillight. Also new for 2020 is the set of Dunlop Sportmax Roadsport tires wrapped around the Ninja’s 17-inch, five-spoke wheels.

The muffler is attached to the bike’s underbelly to help centralize the weight and keep the center of gravity low. The 649cc parallel-twin DOHC engine is unchanged, tuned to promote a healthier dose of power in the low and mid-range. The Kawasaki team also describes how the throttle is set up to make the bike feel lighter and livelier.

I’ve always had a soft spot for Ninjas. I don’t know if it's the green—my favorite color—or the iconic silhouette, but there’s just something about a Ninja that gets me going. While I wasn’t a fan of what Kawasaki was trying to accomplish with the 300, I fell in love with small bikes all over again when Team Green introduced the 400. As for the Ninja 1000, it’s on my list of “wants”, as soon as I have the budget and the garage to justify owning more than one motorcycle.

There Ninja has several advantages that allow it to stand out from the crowd. For starters, it’s the only 600cc-or-so twin offered in a sportbike by one of the Japanese giants. Whether this engine choice is good or not depends, of course, on personal preferences.

It’s also competitively priced and the good news is that despite the 2020 improvements, the price tag remains unchanged. The base model goes for $7,599 and the KRT Edition, for $7,999, which is $1,700 less than its closest competitor, the Honda CBR650R. Plus, if you ask me, it’s one of the best-looking designs in the range.

In Kawasaki’s words, the Ninja 650 looks like the kind of bike that looks good in a paddock on weekend track days but that will instead gladly sleep in your garage and act as your daily commute buddy. There’s nothing wrong with wanting a handsome, aggressive-looking sportbike to ride to work and back. You can still take in on the track if you so wish, you’d probably still enjoy yourself, but the model’s focus is on getting you where you need to be on the daily.

Considering I’m kinda sorta the target audience for the Ninja 650—I have the “25-to-44-year-old range” down, I’m just missing the “male” part—I was therefore understandably curious about the new 650. After all, as I listed above, the 2020 Ninja 650 has a lot going for it but while a good price point and a handsome design are enough to attract people to the showrooms, the riding experience is what will get them to throw their money at Kawasaki.

It looks like the new Ninja 650 talks the talk, but does it walk the walk? We hit the Californian mountain roads to find out.

We set off on a cool morning, hitting the streets of Santa Barbara before heading for the mountains. What better setting to test whether the bike is as flexible and versatile as Kawasaki claims it is.

As soon as I twisted the throttle, Kawasaki’s enthusiastic description of the throttle set up immediately came to mind. Lively, you say? We’re not quite in KTM territory but we’re pretty close. As soon as you move the handle by a millimeter, the bike sprints into action. Once you get going, the power delivery evens out and becomes more progressive but that initial twist is pretty, well, lively.

As we headed out of the city and made for the hills, it wasn’t long before we encountered our first of many twisties of the day and before I found out how much of the “we tuned the engine so that it produces more low and mid-range power” spiel was true.

I quickly found my sweet spot in third gear as I started tossing the bike in the bends. The powerband has plenty of elasticity from the low end all the way up to the 10,000 rpm red cap. The revolutions easily yo-yoed up and down as I opened and closed the throttle. The engine never contested my decision to stick to a single gear and just went along with the program without as much as a cough of discomfort.

Not that changing gears is problematic on the Ninja—the assist and slipper clutch makes sure the mechanism is smooth and light in the hand. The actions between the levers are seamless.

Braking is brought to you by Nissin with a pair of 300-mm semi-floating petal discs with two-piston calipers at the front wheel and a single 220-mm disc with single-piston caliper at the back. The braking is sufficient for the size of the bike and the power it puts out though I would have liked just a tad more grip at the back, especially in the mountains—just a personal preference. I think unlike me most people will be satisfied with the simple set up.

I see you, Nissin.

I relied on engine braking a lot to help slow me down as I headed into the downhill curves as it was strong enough to hold me back but not so aggressive that it would toss me back and forth in the saddle. Out of the mountains and onto the highway, the bike performed relatively well. You will meet the limits of the parallel-twin but not before you reach those of legality.

The front wheel is supported by a 41-mm KYB fork with 125mm of travel while at the back, the gullwing swingarm teams up with a KYB single shock. The setup is on the softer side which works well for the city but it’s steady enough to keep the bike well-grounded in the bends. Think of it as a jack of all trades.

Comfort-wise, the bike’s proportions haven’t really changed and neither has the semi-relaxed sport stance. You still get a fairly steep bend in the knee and slightly more weight shifted forward on the hands but that’s a sportbike for you. Frankly, it’s not so intense that it becomes unbearable after only a few minutes in the saddle. You will get some good use out of the bike before you start feeling the strain.

After a full day of riding, I only really started to feel the aches on the way back into the city, as we hit the highway at the end of the day. That’s when pretty much everyone in the group started shifting and stretching. That's also where I noticed that the lower windscreen is a little problematic at highway speeds. I ultimately couldn’t help but crouch down on the tank to relieve some of that wind pressure. If I were to buy the 650, I wouldn’t take it home without first having the optional taller screen installed—it’s worth putting in the extra $196.95, especially if your commute involves a decent amount of highway riding.

You know what? I like this new Ninja 650. I think it walks the walk just fine and ticks the boxes Kawasaki says it does. While I have a fairly wide experience with Kawasaki’s sport lineup, I wasn’t as well acquainted with the 650 and I was pleasantly surprised with how close to its description it was.

Kawasaki says the Ninja 650 is designed to appeal to 25 to 44 y.o. male riders who want a bike they can show off but also commute on and I think in that regard, the bike meets the expectations. It’s your quintessential Japanese sportbike that’s a great follow up to a first bike, when you reach that point in your riding evolution where you’re looking for a more long-term option that won’t compromise on usability and fun.