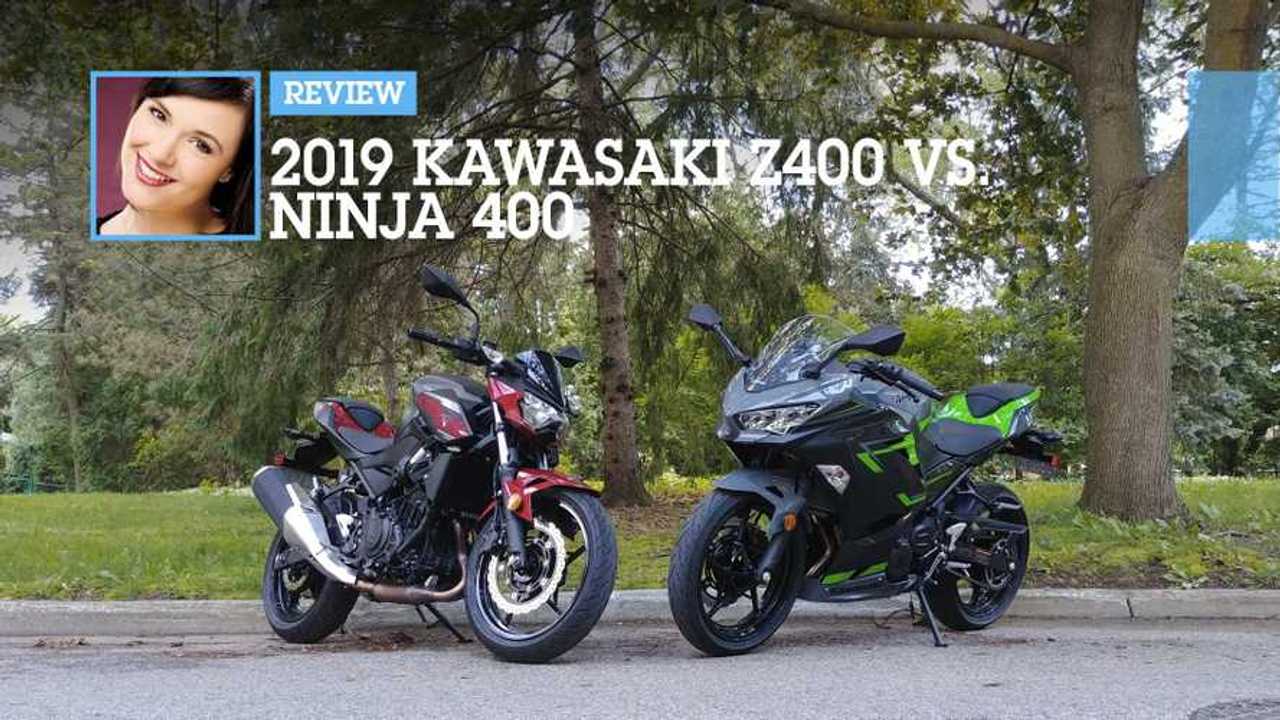 We’d been expecting the Z400 ever since Kawasaki unveiled the Ninja 400. The company paired up the Z, the Ninja, and the Versys for a trio of small-displacement, 300cc models that offer a variety of experience based on the same powertrain.The tiny Z adopting the 400cc powertrain introduced wth the Ninja didn't come as a big surprised. The model showed up in the 2019 lineup. Director Jason attended the launch back in January, but we wanted to get a real-life feel for the newcomer.

Considering how well received the Ninja 400 has been, it made sense to compare the new 400 to its popular brother. To make this comparison happen, I called upon our colleague Sophia, also based out of Toronto, for a little help. The poor soul was "stuck" riding on the Ninja 400 for a few days, while I picked up the new 2019 Z400.

When I showed up at the Kawasaki office to get the little Z, my contact there welcomed me and gave me the usual walk around, as he usually does when I get a presser. Interestingly, he commented that while the two bikes are virtually identical, they feel like two entirely different motorcycles. Mind you, I hadn’t been on the Ninja 400 in a year, so I jumped in the saddle of the Z400 and brushed the comment off, thinking to myself that they couldn’t be that different. Turns out I was wrong to doubt him.

From a technical aspect, the Z400 and the Ninja 400 are pretty much twins. The underlying platform is the same, the suspension and brakes are as well. Of course, the Z sheds the full fairing and the suspension is (apparently) set to a slightly more forgiving set up than the Ninja. From a size standpoint, there are a few, minuscule differences in measurements that make the Z400 wider by a few millimeters and also lower than the Ninja. The Z is also a tiny 2 lb lighter than its already lightweight brother, tipping the scale at 364 lb versus 366 lb (for the ABS version).

Surprisingly, while there’s only a few pounds difference between the two models, the Z400 feels much lighter. Not that the Ninja is heavy by any means, but the little Z weirdly feels lighter. This could be due in part to the absence of a fairing which gives the impression of having more freedom of motion of the headstock.

Despite using the same 399cc twin-cylinder mill as the Ninja, the Z400 feels gruntier at low rpm and a little buzzier at highway speeds. Sophia commented about that that the Z felt twitchier at take-offs than the Ninja. I would describe its overall behavior as a little more primal. While the Ninja rides smoother and in a more linear manner, the Z doesn’t thrive on being predictable and has more character. I wouldn’t use it as an argument against the model, but simply as something that could make a potential buyer choose one over the other.

That being said, I fell in love with the 400 when I first got my hands on the Ninja and riding on the Z was only a reminder of how much of a hoot that little engine is. This is something Sophia echoed in her comments, describing how powerful they feel even on the highway. Don’t be fooled by the “small displacement” appellation—both the Z and the Ninja are capable little buggers. You do meet a plateau once you reach a cruising speed of around 75 mph—unlike, say, the Yamaha R3. But at any speed below that mark, the tiny mill is flexible and willing to give you as much juice as you want.

Because of how versatile the Z400 and the Ninja 400 are, I’ve regularly been referring to them as excellent starter bikes. While I find most 250-300s underpowered and lackluster, the addition of 100cc is enough to turn a bike you’ll want to swap after only one season into one you’ll want to grow on. Sophia, who got her start on a Ninja 250 (which is currently sleeping in her garage), agreed with me, saying that the two are light and gentle enough while providing good-enough power to satisfy both seasoned riders and beginners alike.

The geometry is also quite different on the two 400s—that’s, in fact, the biggest difference between the two and the one feature that will tip the scale in favor of one or the other. The Ninja places the rider in a pretty classic sportbike stance—not crotch-rocket style, but a more relaxed version of it. Leaning slightly forward creates a body-hugging geometry that creates a sort of physical connection between the bike and the rider. It personally made me feel more confident than the Z did, particularly in the bends, simply because of the more engaging position.

The Z is fitted with a higher handlebar which means the rider doesn’t lean in as much. Despite the different angle and reach in the arms, the footpegs are positioned in the same place as the Ninja on the frame. To me, this creates a stance that feels a bit awkward. The pegs and saddle impose a sportier stance but that the handlebar keeps you sitting straighter up. The resulting geometry felt a bit weird to me. Something that felt like business at the top and party at the bottom.

It wasn’t uncomfortable, but slightly unsettling. For Sophia, however, it was paradise. The raised handlebar and upright stance won her over. In comparison, she found the position on the Ninja to impose too many limitations. “The intended stance—the body carefully curled and ready for speedy straightaways and intense corner leans—doesn’t allow for the kind of comfortable sightlines that keep a city rider safe,” she explained.

That being said, we both agreed that comfort-wise, neither bikes are all that. That’s ok, the 400s haven’t been designed with long hauls in mind. Just keep in mind that the numbing, tingly feeling of sitting for too long settles in around the one-hour mark.

We also agreed that both 400s handle remarkably well. In the city, thanks to how little they weigh, both the Z and the Ninja performed very well They easily zip through traffic and the clutch doesn’t become a burden when sitting in traffic. I even had fun walking the bike along.  I wasn't joking or being poetic when I said it's easy to walk.

As for the highway, the two models are very steady. Despite the absence of a windscreen, the Z feels steady and the wind pressure isn’t as tiring as on other naked models I’ve been on.

A little bit about the suspension. The mantra behind the set up on the two baby Kawasakis seems to be that fun thrives where comfort is sacrificed. Though Kawasaki qualifies the suspension on the Z400 as “a bit softer” than on the Ninja, the two bikes are equally punishing on rough surfaces. Sophia described it as “being airlifted” at every bump.

There’s no working around it. You want a sportbike—with or without a fairing—this is a compromise you have to be willing to make, in most cases at least. The 400s aren’t better or worst than other sportbikes I’ve been on—they’re all meant to offer crazy good cornering and stability to the detriment of commuting comforts. But fun and nimble, that they are.

While both Sophia and I had similar observations and made very similar comments in our comparison between the two 400s, ultimately, we both ended up having very different preferences. Halfway through our week with the 400s, we met up to discuss the bikes and put them through their paces on a road circuit with twists and turns and stops and go’s. Turns out Sophia liked the Z better and my love for the Ninja 400 couldn’t be topped by the Z. We ended up swapping bikes for the remainder of the week.

On paper, the 2019 Kawasaki Z400 is pretty much a naked variation of the Ninja 400, a twin without a fairing, sporting instead the Z lineup's signature Sugomi aesthetic. They are priced only $200 apart, the Z400 coming in at $4,799 and the Ninja, at $4,999, use the same engine as well as 99.9% of the same mechanical components—the displays are different. On the road, however, it's a very different story and they could pass for two entirely different motorcycles.

The Ninja 400 has a typical and tamed sportbike demeanor while the Z400 feels rougher around the edges. Which one wins our comparison? If you ask me, the Ninja. If you ask Sophia, the Z. I guess it's a draw. So how do you choose between the too? You sit on them and decide just how sporty you like your stance.