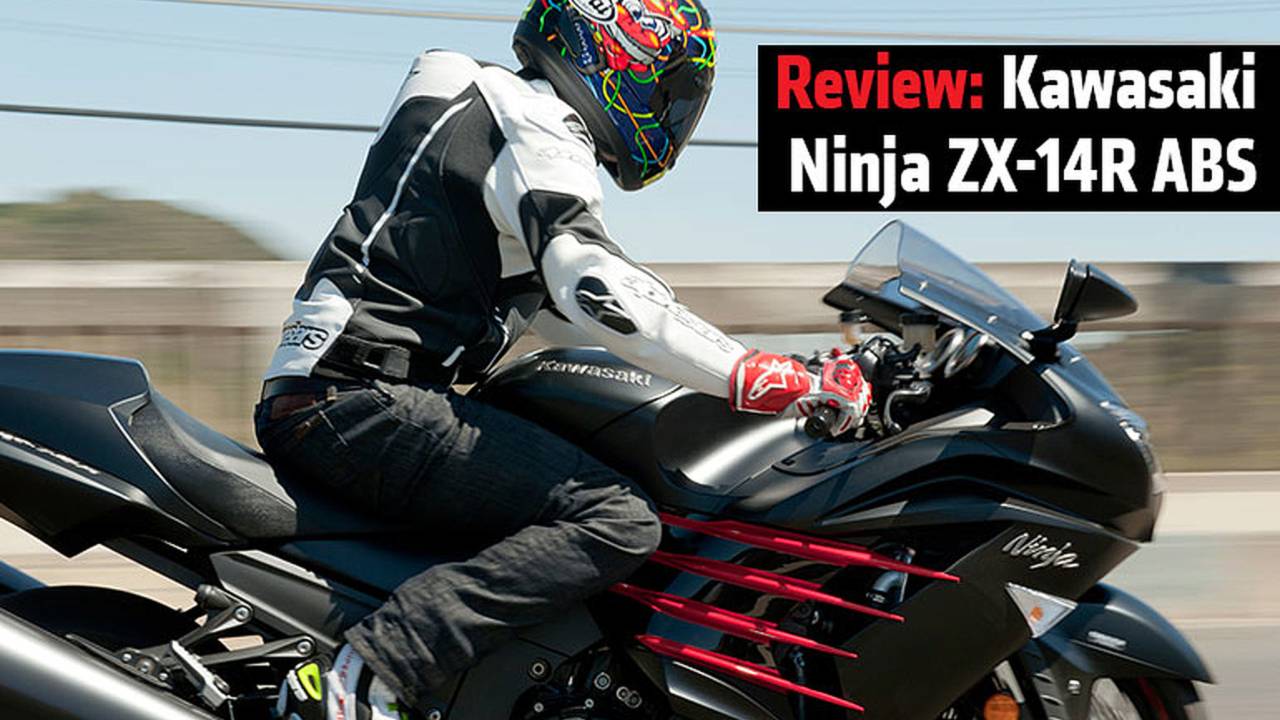 If mad dog power, multi-functional sport versatility and VIP comfort is what you desire, the 2014 Kawasaki ZX-14R ABS is what you require.

Walking up to Kawasaki’s top gun in its 2014 Supersport line-up for the first time is an intimidating sensation. The Ninja ZX-14R ABS dwarfs traditional sportbikes when it comes to physical stature measuring in at over 7 feet long and nearly 3 feet wide. The bulbous tail, dual exhaust pipes and front fairing do not seem to serve much functional purpose over the more slender dimensions common to other bikes this category aside from reminding the rider of the massive power plant lurking between the fairings. However, once in the cockpit, the bike seems surprisingly compact and nimble.

Turning the ignition clockwise and firing up the sleeping giant is rather uneventful as the engine smoothly and silently purrs. The power delivery mode and KTRC traction control can be cycled through and saved via the left-hand controls before each ride. Power modes available are “F” for fun or “L” for lame and traction control interference can be set to “1”, “2” or “3” or turned “OFF” completely.

Pulling in the smooth yet somewhat-heavy hydraulic clutch, popping the gearbox into first and easing away from a stop is a graceful and effortless task. The tall first gear and additional mass require a bit of extra slippage from the clutch but nearly eliminates the need for shifting when cruising around neighborhood streets under 30MPH with a still-discreet exhaust note. Jumping onto the freeway is where the fun starts. The 1,441cc engine wakes up around 5,000 RPM and really rockets down the onramp beyond 7,000. Due to the whispering engine noises, butter-smooth power train and extremely stable ride, triple-digit speeds are approached far before expected all while easily minimizing front wheel hang-time.

interstate at 80 MPH in 6th gear at a mere 4,300 RPM is more desirable. The need for upshifting is reduced even further by the relatively small gear indicator getting lost in the sea of information on the instrument cluster. Slipping around slower traffic or dodging erratic drivers is easily achieved with a lax twist of the wrist from the comfort of the cushy seat, raised clip-ons and recessed, rubber-topped foot pegs.

Relaxed, long-distance freeway riding isn’t the only mission the ZX-14R is designed to conquer. The big boy Ninja is also qualified to do some serious work in the canyons. At speed, the 591 pound curb weight is masked quite well by the solid chassis and beefy suspension.

Flicking the bike into corners requires minimal input and creates a very planted ride as throttle is applied. However, the beast does begin to loaf around mid-corner if road surface imperfections are encountered. Hitting dips, large seams or debris when leaned over initiates a ride reminiscent of that atop a mechanical bull crossed with the back seat of an ’89 Cadillac Eldorado with blown out shocks.

Even adding dampening through the adjustment clickers (especially on the rear shock) should have eased this wallowing but didn’t seem to deliver a complete remedy. Rolling on the throttle, getting off the saddle and hanging off the bike a bit more proved to be the best elixir to this condition.

The electronic aids the ZX-14R ABS is armed with restores an additional level of confidence the rider may have lost when rapping the motor up towards the red RPM territory. The three levels of KTRC traction control provides a progressive range of intervention excusing any less-than-precise right wrist inputs. The system interference is can be detected when activated yet is integrated rather flawlessly into power delivery resulting in a fairly unnoticeable experience.

A similar sensation is experienced with the ABS feature offered on the self-titled model. Even exaggerating a panic breaking situation by grabbing a handful of front break lever and/or stomping on the rear pedal allows for speed to be shed in a very smooth and controlled manner without the chattering sensation produced by other systems. As a result, the pilot can ride confidently knowing both the binders and power tap are in good hands even if his or hers encounter a lapse in coordination.

The competition offers a substitute product for a $1,100 discount with the Suzuki Hayabusa. However, this rival packs 101 less CC’s in the engine displacement department and lacks a traction control feature in the electronics package. These may seem like minuscule details but then again, so is this price difference at the end of the day.

This 7.5% price point premium over the competition and less than 3% over that of Kawasaki’s next Ninja down the line seem like peanuts when the contents of each package are analyzed.

As far as big dog sportbikes go, the Kawasaki Ninja ZX-14R dominates the marketplace. The manner in which the Ninja delivers power to the ground through utilization of a vicious power plant, comprehensive electronics package and rigid chassis is unparalleled. The synergy created by the ZX-14R produces a multipurpose weapon capable of tactical city commuting, comfortable freeway cruising and aggressive canyon carving. Though minor performance shortcomings may arise when maneuvers more suited for smaller-bore road racing machines are attempted, the big brother can still hang with the rest of the fleet.

RideApart Rating: 9 out of 10 (for a big bore street monster)