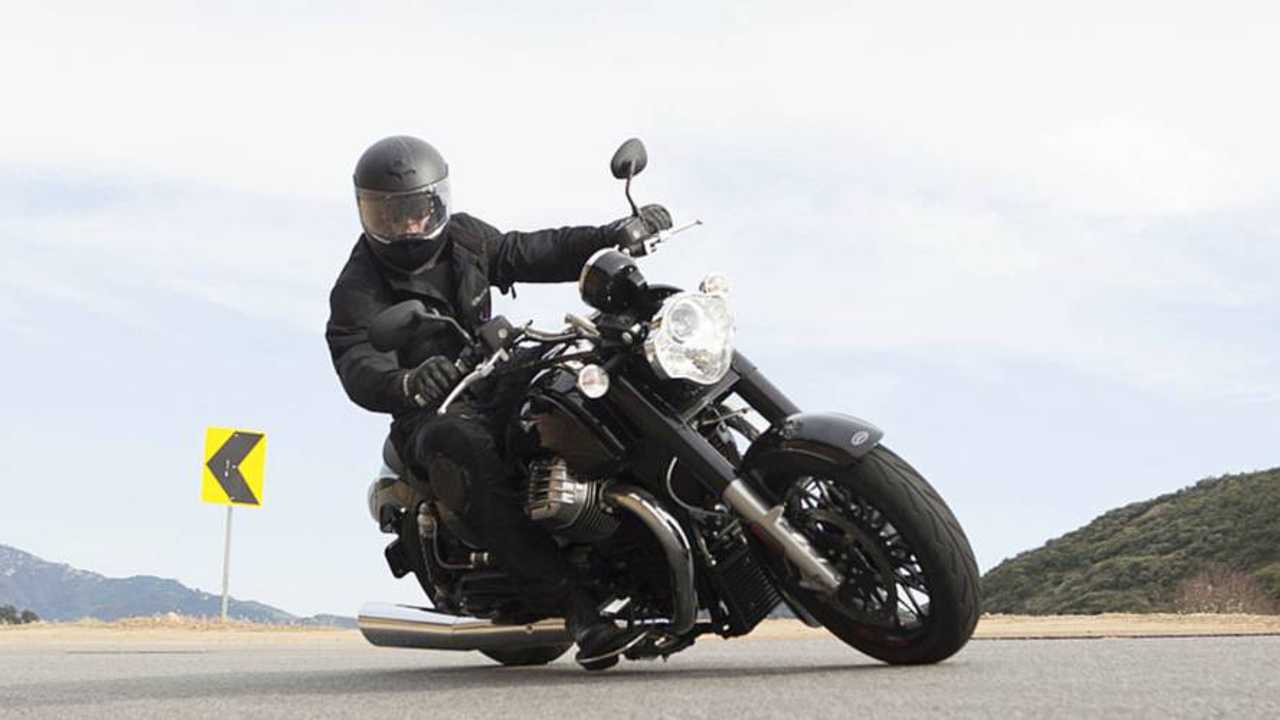 You know the typical cruiser compromise: riding one means you achieve a certain image, a certain experience, but at the expense of everything else that makes riding a motorcycle so fun and so practical. But, what if we were to tell you that it’s possible to have all your cruiser character, all your cruiser image, just in a package that doesn’t sacrifice handling, performance, safety or comfort? You can do that with this new Moto Guzzi California 1400.

TALK TO ME GOOSE!

The first new product of a $50 million investment in the brand by its Piaggio Group parent company, the California ditches much of what used to be Guzzi tradition. The new, larger motor is now rubber-mounted to reduce vibration. Since 1971, thanks to a man name Lino Tonti, Guzzis used their motors as stressed members in the frame.

While the direction and extent of its movement is controlled by special rods, this method of vibration reduction can be seen as a bit of a cost cutting. By losing the engine as a stressed member, the frame has to become heavier and stronger. A balance shaft could have killed vibration without adding much weight, but would have necessitated the added expense of new cases.

At 710lbs ready to ride and fully fueled, the California is no welterweight, but that does still come in at 100lbs less than the equivalent Harley, the Road King.

The California is also considerably more affordable than that model, starting at just $14,990 to the Hog’s $17,699.

And the Guzzi has one other thing that every other cruiser on the market doesn’t: the brain of SBK Championship winning Aprilia RSV4. That means this cruiser uses a ride-by-wire throttle with switchable riding modes and three-position traction control. It also has ABS as standard.

That new, 1,380cc motor is created by fitting larger pistons onto the block of Guzzi’s existing 1,151cc air/oil-cooled v-twin. Outright torque only grows modestly from 80 to 88lb/ft, but the overall engine character become much more relaxed and flexible as peak torque shifts from 6,400 all the way down to 2,750rpm. Power actually decreases from 110 to 95bhp, but again also shifts down the rev range from 7,500 to 6,500rpm. The result is a flexible, torque, easy-going motor that’s still capable of a serious turn of speed.

Splitting is often discouraged on launches due to liability concerns, but sitting in that traffic for nearly an hour, in 80-degree plus temps, proved a good test of the big Guzzi’s user friendliness. Where most air-cooled cruisers could edge towards overheating in these conditions, the California remained even tempered and easy to ride. Event crawling along, making a few inches progress between complete stops, its on-paper weight was offset by a low center of gravity and natural balance. Unlike most cruisers, the controls are easy to reach, relatively light and aren’t subject to binding or grabbing as things heat up.

Things became much more fun once we turned off the congested Pacific Coast Highway and onto Malibu Canyon Road. Its flowing corners are where the California is most at home, making easy use of its torque to maintain what’s actually a fairly impressive pace.

Like other Guzzis, the California excels in that ever-elusive “feel” stuff. Thank the longitudinal crank and quality suspension components for that. The result of the tires, suspension and brakes communicating what they’re doing in a completely uninterrupted fashion is immense confidence. Even with your feet forward and your hands high up and out in front of you.

The California’s floorboards are sheathed on the bottom with nylon sliders. Think Ducati Hypermotard 1100. They’ve got enough clearance that they won’t go down in sweepers, but on tight corners such as those found on The Snake, they definitely will. In fact, the bike is happy lifting its boards enough that the frame occasionally touches down. At least when you ride like a 32-year old speed freak more used to dragging knees than hard parts.

But, even with that frame dragging on the ground, the front end still delivers confidence and stability, never once feeling like it’s about to be lifted off the ground. With that confidence, I was able to tackle a road that’s challenging for most sportsbike riders with real aggression and at a pace that would have left most of those riders eating my dust.

Two annoying photoshoots that only resulted in virtually unusable photos (sorry for the press shots being used in their place) later and I informed the Guzzi guys that we’d be splitting on the way home. So it was back out on to the PCH and through traffic at what’d be my normal pace on any bike all the way back to Santa Monica.

The handling! Seriously, you won’t believe you’re riding a cruiser. While outright pace is going to be a bit lower than that of a sportsbike, feel is actually superior to many current Japanese performance bikes. The California has light, neutral steering that just rolls into corners, tracks a line with utter stability, then lets you rocket out on that fat torque curve.

Don’t worry about those fairly unimpressive numbers making the engine boring. Air-cooled twins are about making smooth, rapid progress, not turning every straight into a drag race. There’s more than enough torque here to maintain a very healthy pace through a twisty canyon road. And, if you really do want to drag race, it’ll spin the rear tire away from the lights with full throttle. If you have the traction control switched off…

Which brings us to the electronics. In a fit of national pride, “Pioggia, Turismo and Veloce” stand in for the ride-by-wire’s “Rain, Touring and Sport” modes. You’ll end up using Turismo most of the time as it delivers full power and smooth throttle response, but Veloce noticabley sharpens things up to the point of abruptness while Pioggia blunts both outright power and response for slippery conditions.

Traction control, again based on the smooth, indiscernible intervention of the RSV4, can by set to three levels of intervention or completely off. I spent most of the day in the lower level, which still allows some slip, without letting things get too sideways. Big bikes like these have a ton of momentum, so the little helping hand is much appreciated, allowing you to take serious liberties in complete safety.

The front end is all about safety too thanks to the standard ABS. No shudders or jutter here, it just brings you to a commanding halt. Brakes are front biased and use powerful radial calipers, unlike most other cruisers, meaning you can two-finger the right lever to trail them through corners. They really do deliver sportsbike-like levels of feel, control and power.

Comfort, too, is solid. I’ve never adapted to taking all the weight off my feet and legs and directing it through my spine, but only experience minor back discomfort on the tightly sprung, well-damped Guzzi. Anything else all shiny and v-twiny typically causes spasms in my lower back. It’s also far, far, far superior to the previous California; tall folks fit as well as short.

Miguel Galluzzi’s design is a masterpiece, appearing timeless where every other entry in the segment is either a shameless throwback or awkwardly futuristic. The Harley crowd is going to be able to relate just as well as the blind people who were once told the Diavel is a good looking bike and believed that.

>The California's mechanical components reek of both quality and function.

LED brake lights and turn signals on the rear pretty much disappear in direct sunlight.

You’ll be able to do way better in the aftermarket with a $3,000 budget than the Touring model nets you. The bags are extremely well integrated, but come one, that’s an entire Cleveland CycleWerks bike worth of premium.

The stock bars are going to require too much of a reach for shorter riders.

The California 1400 has all the looks, character and presence you could ever want from a cruiser, but rides like a real, 21st century motorcycle. Handling and brakes aren’t just safe, they’re genuinely good, even when compared to performance-oriented motorcycles, but that big v-twin’s rumble and quirkiness still conveys that primal motorcycle experience in an incredibly emotive way.