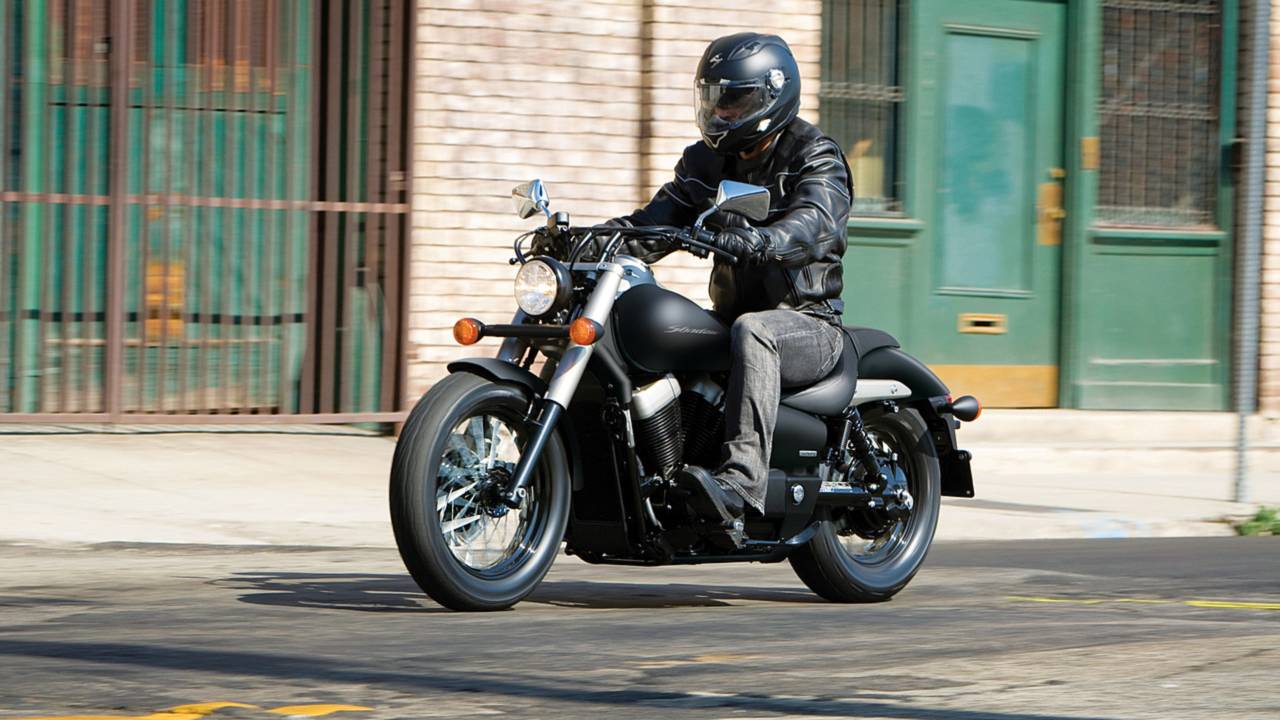 RideApart Review: 2013 Honda Shadow PhantomFor 2013, Honda has blacked-out its popular Shadow cruiser and called it the Phantom. Is that enough to...

For 2013, Honda has blacked-out its popular Shadow cruiser and called it the Phantom. Is that enough to keep it competitive in the mid-capacity cruiser class?

Starting with its proven Shadow platform, Honda blacked-out the motor, paint, forks, wheels and most other parts to create the Phantom.

Mechanically, it fits forward-mount foot controls, bobber-style bars and a single-piece, gunfighter-style seat. A smaller front fender aids the clean, simple aesthetic. The wheels are spoked, but come in totally reasonable sizes: 17-inches front and 15 rear. Oh, and the speedometer is mounted on the 3.7-gallon tank.

The Shadow platform is about as proven as it gets. The 745cc v-twin uses both liquid-cooling and fuel-injection, feeding power through a maintenance-free shaft final drive and wide-ratio, five-speed gearbox. It develops a respectable 47lb-ft of torque and 45bhp.

Think of the Shadow as the friendly face of cruiser-style motorcycles. Where most others tend to be difficult-to-ride, slow and uncomfortable, the Shadow is safe, efficient and easy, without sacrificing the burbling character that defines the class.

I spent a week living with the Shadow, using it to get around Los Angeles’s congested surface streets and bumpy, high-speed highways. Not only is that a tough environment for a cruiser, but it was in the hands of a tough reviewer too. Having grown up in Europe, I’m most comfortable on modern performance bikes and have high expectations for things like braking, handling and comfort as a result.

That Shadow actually proved to be remarkably decent transportation in that environment and in my hands though. Compared to virtually all other cruisers, it was easy to ride and confidence-inspiring both in traffic and at speed on the highway, where it’s totally comfortable and safe up to about 75mph, at which point the city’s rain grooves, seams, potholes and ruts begin to cause it to wobble and weave. It’s not that it won’t go faster, simply that doing so begins to take a very confident hand and absolute attention.

Slow things down and the Shadow’s manageable 549lbs (wet) weight, conservative chassis geometry and solid brakes mean you can move through traffic with confidence close to that delivered by more performance-oriented styles of motorcycle. Unlike many other cruisers, which are essentially terrifying to ride through busy traffic, the Shadow’s front wheel exists in the same time zone as your butt, giving you that much more time and space to react to things happening in front of you.

All the above is aided by a smooth, willing motor and gearbox combination. Where, on largeer, air-cooled cruisers, you can feel the engine’s heavy internals resisting changes in revs, the Shadow picks up and drops its RPMs in a willing, predictable matter. You can even rev-match downshifts after a bit of practice.

The Shadow’s hardest test came when a Ukranian model thought it sounded like fun to get picked up by a boy on a motorcycle for a date. All the other bikes in my garage that night lacked passenger accommodations, so the job fell to the Shadow.

Even with its smaller passenger seat and without grab rails, the report was that she felt both comfortable and safe. As an added bonus, that smaller seat means the passenger has to sit very close to you, with their legs gripping your torso and their arms around your waist.

I’d asked that she wear jeans and boots, but turned up to find long legs poking out of denim short shorts. Climbing off the bike outside the restaurant, she managed to touch her exposed calf to the Shadow’s exhaust pipe, resulting in a second-degree burn the size of my hand.

All the cruiser style in a package that’s not just rideable, but actually good to ride. So long as you take it slow.

Instead of being a ridiculous exercise in excess, the engine simply gets on with the job of providing motivation and does so in a willing, accessible, friendly manner alien to most cruisers.

The brakes are strong, reassuring and have plenty of feel. You won’t quite be able to trail brake into a corner, but you can use them in anger without washing the front tire.

With a reasonable reach to the bars, an upright riding position and sensibly-located forward foot controls, this is one cruiser that’s legitimately comfortable too.

Handling is competent and safe in a manner that’s nearly reminiscent of a standard-style motorcycle.

The Phantom does without the Aero’s ABS or the RS’s mid-mount foot controls. The former would make it even safer and even more confidence inspiring, while the latter would boost both comfort and control.

The key is located under your left butt cheek and the steering lock out-of-the-way, behind the left fork. Both are hard to locate in the dark and awkward to reach.

It outperforms the Harley in every objective measure with the exception of volume and is just as friendly and easy to ride as the Bolt. Subjectively, it lacks the style of either.

If cruisers are your thing, then this is about as good a bike as you can expect to get. Comfort, safety, ease of use and build quality aren’t frequently things associated with the class, but the Shadow Phantom has them all in spades, all at a very affordable price.