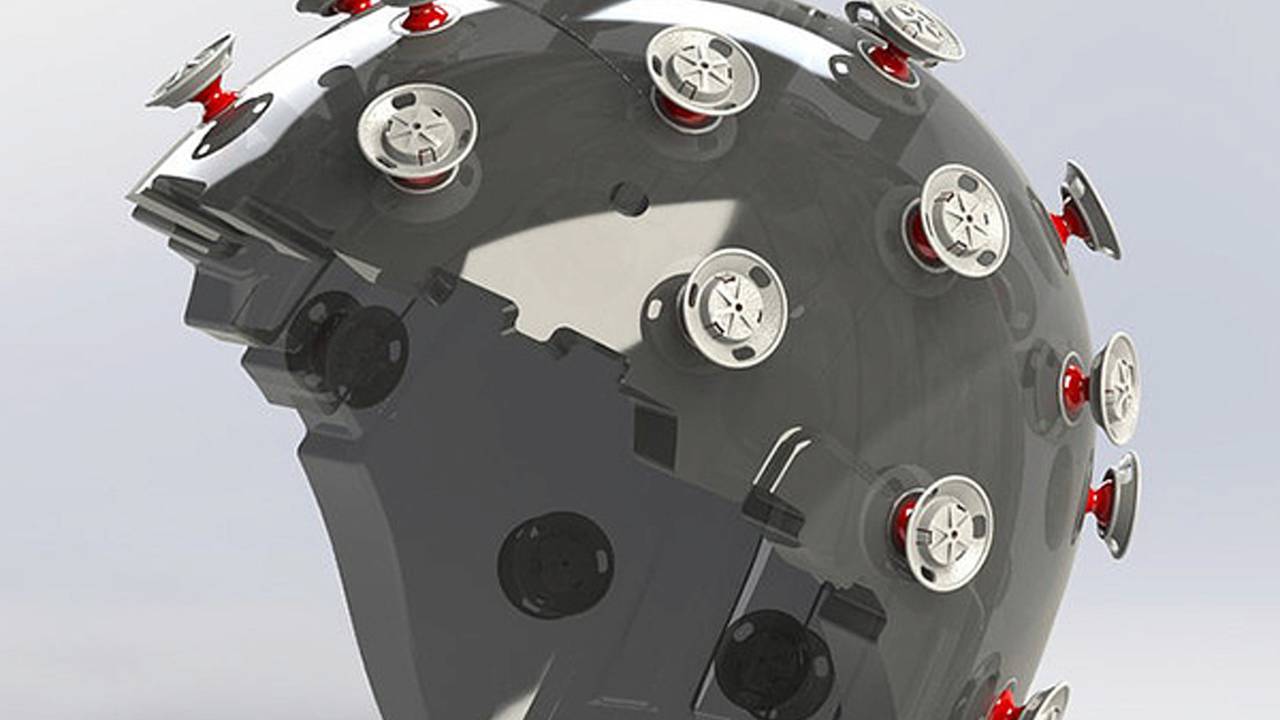 We are, apparently, ready for this jelly.

Motorcycle crash helmets have essentially been the same old thing since they were invented 60+ years ago—an energy absorbing chunk of styrofoam glued into a hard outer shell. Sure, some have better graphics or neato vents or whatever, but that's the basic technology. Now, a tiny company in California is bringing actual technical innovation to that formula, all in the name of reducing concussions that result from low-speed impacts.

That styrofoam and shell formula is actually really good at dealing with large impacts. The density of the styrofoam (or "EPS" as people with a vested interest in making this stuff sound expensive call it) can be varied with great specificity, allowing controlled deceleration of the head. What it's not terribly good at is reducing shocks from low-speed impacts.

If you recall the Del Rosario helmet concept (still in progress), it addressed the absorption of low-speed energy with gel inserts between its carbon arches and the shell. This new 6D helmet does something similar, affixing gel between the two layers of styrofoam. It locates that gel between two discs (one on each layer of EPS) that move in six different direction, hence the "6D."

We asked John Del Rosario to take a look at the 6D design for us. "This is actually pretty neat, separating the high & low impacts is the key," he says. "Gel-type material affixed between two plates is what gives it the multidirectional and damping qualities, I'd say it should fit in great in motocross because of the lower speed type of impacts."

Here, you can see the gel dampers located between the two layers of EPS and the gap that doubles as extra ventilation.

Traditional Snell and ECE-rated helmets work well in impacts above 9mph, but struggle to provide energy absorption at lower speeds. At 9mph, that force can be up to 120g, double the threshold at which concussions begin to occur.

The gel dampers in the 6D helmet are designed to provide that low-speed protection, while traditional styrofoam remains to deal with faster hits.

At 4.5mph, the 6D transfers 49g of force to the riders' head. An ECE helmet will transfer 79g at the same speed.

Such low speeds may sound a bit silly, but most accidents on motocross tracks or while riding off-road simply involve falling to the ground. The quoted speeds above aren't how fast you're riding, they're the speed at which your helmet collides with something.

Other innovations should help boost safety a little bit too. There are cutaways in the shell where the helmet would meet the clavicle in an impact, designed to reduce collarbone breaks and there's padding on the chin designed to absorb energy from either face plants or the helmet ramming into the sternum. As with many other helmets sporting a dirt peak, the screws are designed to shear away on impact, preventing forced rotation of the head. The gap between the two layers of styrofoam made necessary by the gel dampers is also used to flow extra air.

6D claims there's not a substantial increase in weight compared to traditional helmets, but we'd worry a bit about additional bulk. The outer circumference of the helmet may need to be larger to accommodate that new found gap between EPS layers.

Sales of the ATR-1 motocross helmet are slated to begin in February 2013, no price has yet been announced, but the general consensus seems to be that the 6D will be one of the pricier motocross lids on the market. A street version dubbed the ATS-1 is also under development.