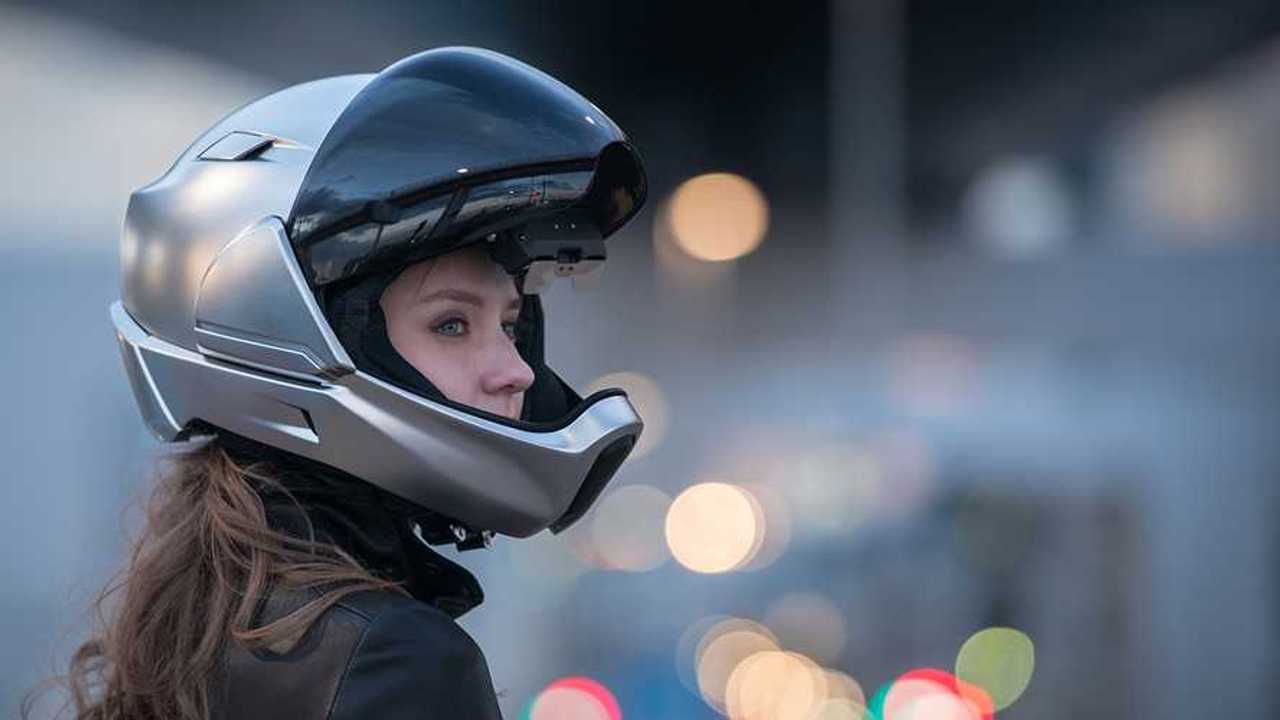 Are we riding or going into space?

Smart helmets are starting to pop on the market. In order to stand out from the small crowd that’s forming on public funding sites, each company tries to find an edge to make its product the option people want to pay for. For CrossHelmet, those perks include a head-turning design and touch controls pads.

The A/C Helmet Is a Thing and We Want It

The design of the X1 is worthy of a science-fiction movie or video game. The curved profile with the breathing mask-looking frontal air intake and bulbous visor give this lid a futuristic look. The rounded visor and bigger opening also helps create more space in front of the rider’s face. Instead of the chin protector being close to the mouth , the design moves the front part of the helmet slightly further from the face.

Like other smart helmets coming to the market, the CrossHelmet uses HUD technology to make all the wanted information available at eye level, turn by turn navigation, a rearview camera that aims to provide the rider with near 360-degree visibility, Bluetooth connectivity with voice commands, noise control, music streaming, etc.

These are features on the list of any helmet with “smart” ambitions. What gives the X1 a bit of an edge is the tactile controls. Touchpads located on the sides of the helmet, where the visor attachment and mechanism are located, allow the rider to complete a number of commands from the tip of his fingers. Motions such as swipe up and down or side to side help control the music. From the looks of it, the pads respond to pressure rather than touch, meaning they work even with gloves on.

The Lithium-Ceramic battery offers a 6 to 8 hours of autonomy. The helmet is fitted with 8GB of flash memory and a Quad ARM Cortex A53 1.2 GHz processor. CrossHelmet guarantees the X1 meets all the safety standards “of the countries it ships to”, meaning it should be certified DOT, ECE, and JIS once it hits the market. The X1 also comes with a selection of a clear or tinter visor, and even a photochromic option that adapts to the amount of sunlight.

Weighting 1,780 grams puts the CrossHelmet X1 on the heavier end of the spectrum, the price to pay for all the tech and gadgets it’s fitted with. Pricing is also on the heavier end: when the helmet makes it into production, retail price will be set at $1,799. That’s almost 2k for a lid. While the company has met and even busted its goal, gathering close to $400k on Indiegogo, it is still possible for the people interested to pre-order their X1 at a discounted price ($1,649 instead of $1,799) and even get their hands on some gear such as gloves. Deliveries are expected to begin in June 2019.