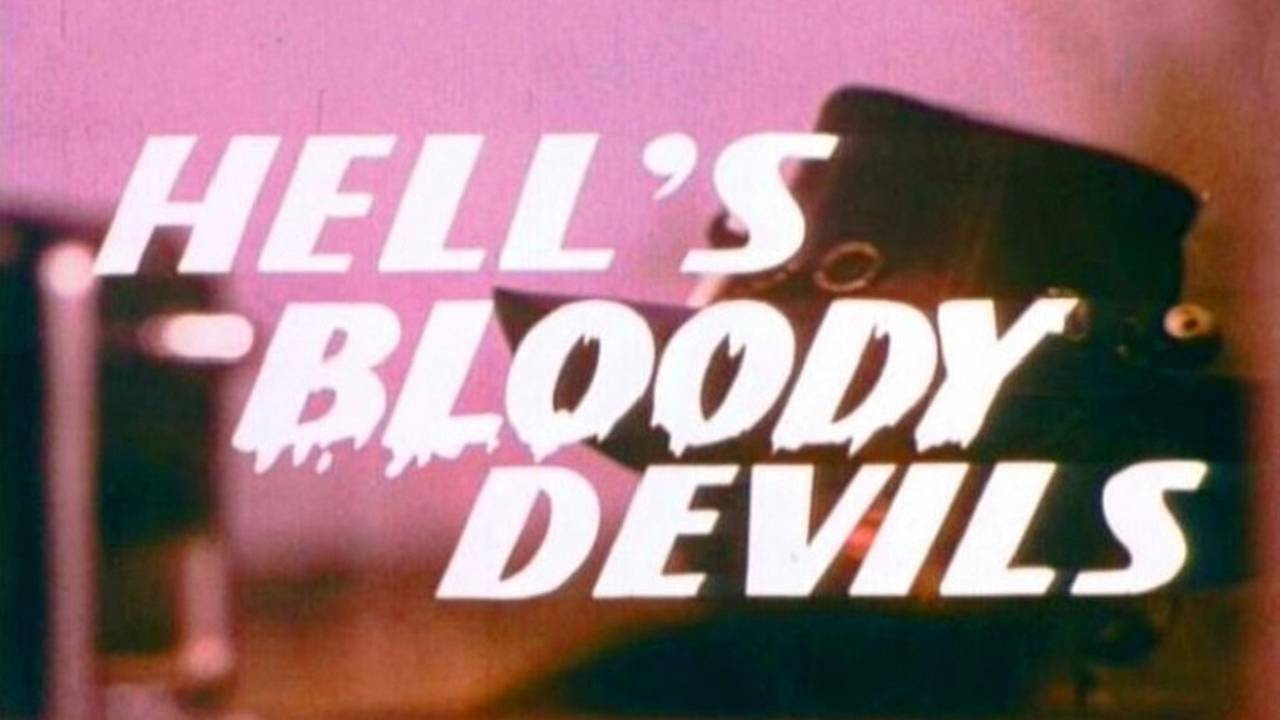 This weekend Jim Downs, myself, a couple hundred spectators, and dozens of motorcycle racers converged on Willow Springs International Raceway for the annual Corsa Moto Classica. Thanks to me wheeling and dealing like James Garner in The Great Escape (1963) RideApart was able to host movie night at the track, and the L.A. Cretins were nice enough to host us in their camp. Now, by the time the movie started we had all had a few beers and may not have had our full mental capacities, but some internet digging revealed that no, even dead sober, Hell's Bloody Devils is a confusing mess.

Here is the rough plot: a gang of American Nazis is making counterfeit $20 bills in a plot to overthrow the government. When the Las Vegas mob finds out about this, they decide to steal the plates and print their own money. Luckily for all of us regular folk, there is an Israeli Mossad agent, who happens to be a beautiful woman, undercover among the Nazis. The FBI also has an agent undercover with the mob, and they manage to strike a blow for truth, justice, and the American way. Where do the bikers come in? Well, they are Nazi bikers who work as enforcers for Nazi leader Count Otto Von Delberg. Confused yet?

Want to buy a monkey?

As several of the Cretins mentioned while we were watching it, "It's like a low budget version of Inherent Vice (2014), with motorcycles." To which one replied "...a lotta ins, a lotta outs, a lot of what have you's." Unlike a lot of other low budget biker films though, this one actually has some recognizable actors, and actresses, including John Carradine (Grapes of Wrath and over 300 other roles), Broderick Crawford (Highway Patrol), and Emily Banks (Star Trek, where -- naturally -- she falls in love with Kirk).

This may or may not be a fan Photoshop, but I'm going to run it anyway

The biker gang segment consists of less than 20 minutes of footage of guys riding around (some is recycled more than once) and beating up random people. It seems the director could only manage to rope in one of the other cast members to re-shoot the biker stuff. They only interact with one of the Nazis, and then not even the main guy; he's just some underling who gives them orders and pays them. The biker stuff is fun in its ridiculousness though. For instance, the lead guy who can only manage a bone stock 1968 Honda 350 twin, but does have the coolest sunglasses.

It's so hard to look menacing with 33hp

According to the credits, this is the Hessians Motorcycle Club, but I find it hard to believe the lead guy wasn't just an actor who learned to ride on set. The owner/rider of the trike is definitely an outlaw, and seems to not even care for the laws of physics.

The most artistic shot in the movie

The bikers are used to good effect, allowing the director to add in more gratuitous drugs, nudity and violence. Thankfully, there are two hot young women who just happen to be out hitchhiking and looking for fun and a wild time, and the Bloody Devils don't have anyone to beat up for the Nazis that afternoon.

Rotten Tomato Rating: None, though it has a 13% favorable audience rating

RideApart Worth Watching: Not really, unless you are out drinking with a bunch of Cretins

Redeeming Quality: It is an enjoyable budget James Bond imitation, with awesome mid-century 1960s hair styles, fashion and interior design. Unfortunately, since I can't find a copy streaming online I can't grab any shots of those for you, but the female FBI agent basically looks like this:

Things to Watch For: Supposedly, in exchange for feeding the entire cast and crew during the whole shoot, Kentucky Fried Chicken got a product placement. I don't know if that is true, but the real Colonel Sanders actually appears and has lines in the film.

Also, the most expensive parts of the film were surely the several explosions; a Cadillac Hearse, a 1959 Oldsmobile that drives off a cliff and then explodes, and a Korean war era army surplus helicopter.

If you are looking for a low budget James Bond knock off, then by all means you should watch this film -- if you can find it. It is readily available in cheap DVD compilations, most notably in a triple feature with Hell's Angels 69, and Run, Angel Run, for about $30 used, or by itself from just $18 brand new. I certainly wouldn't recommend anything illegal, but I bet you can find it online for download somewhere... Anyway, here's the trailer:

It would be great to do another ride-in movie night, or just get a group of you together somewhere around L.A. to watch a few. This may happen in the future, we are just looking for a good venue for it, so drop us a line if you know of one. I'd also like to thank the Cretins for their hospitality Saturday night.