A WSBK career for the ages.

The Ducati Museum reopened its doors to visitors on May, 21, 2021, and the new Troy Bayliss exhibit helped welcome guests back. The date also marked twenty-one years since Bayliss made his debut in the Superbike World Championship (WSBK) on May 21, 2000. He would go on to win three WSBK titles with Ducati and the factory museum will display the six motorcycles that highlighted the number 21’s illustrious career.

The collection includes the 996 Factory 2000 that Bayliss piloted at Monza in 2000 when he replaced Carl Fogerty for the race and impressed many viewers with his famous quadruple overtake. Following his debut performance, Ducati let the Aussie finish the season on the 996, and he would capture his first championship on the 996 Factory 2001 Testastretta the next year, beating Colin Edwards to the crown in the penultimate round at Assen. 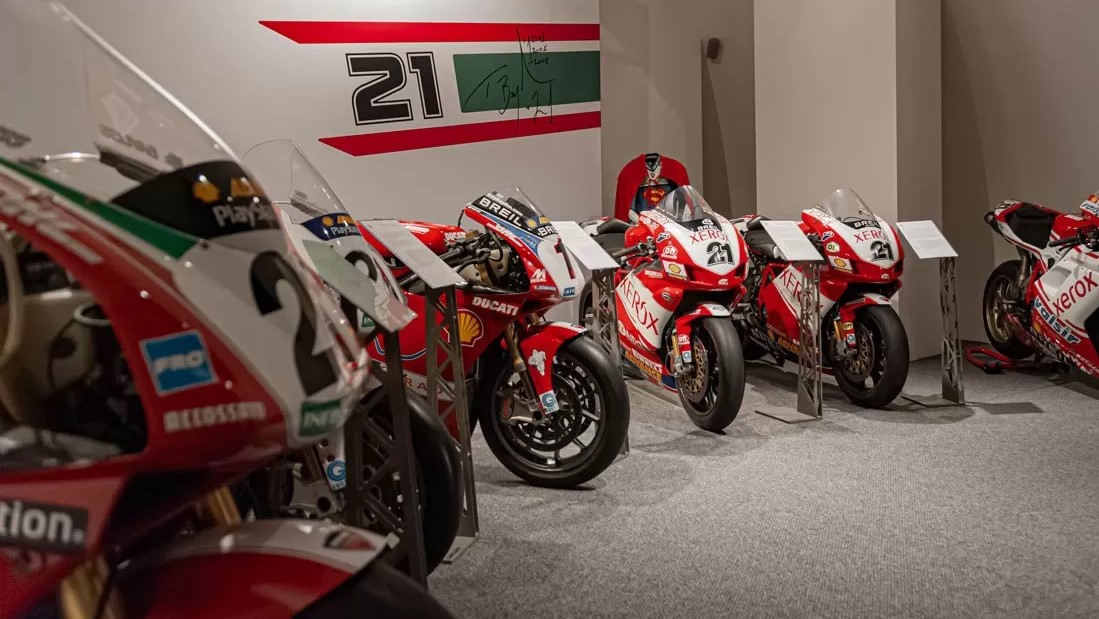 The rivalry between the two racers continued into 2002 when Bayliss and Edwards famously battled at Imola. The 998 Factory Testastretta 2002 Bayliss used to defend his title is also on display at the Ducati Museum, but the number 21 moved to MotoGP following the 2002 season. While initially successful, Bayliss’ MotoGP career didn’t pan out and he returned to WSBK in 2006. That year, Baylisstic recaptured the WSBK title aboard the 999 Factory 2006 “Superman” and won a MotoGP race for the Ducati Factory team when he stepped in for an injured Sete Gibernau at Valencia.

In 2007, the Aussie couldn’t successfully defend his title but he rode the 999 Factory 2007 to a famous photo finish against James Toseland at Assen. The final bike in the exhibit is ’ 1098 R Factory 2008 that he used in his final WSBK championship campaign. The number 21 dominated the field in his final season, beating out his closest competitor by nearly 120 points.

While the exhibit is a touching tribute to a legendary racer, we also hope that Bayliss himself can visit after he heals from a recent bicycle crash. Luckily, the Troy Story: The Legend of a Champion exhibit will be on display at the Ducati Museum until September 19, 2021. We should note that Ducati will move the motorcycles to Modena for the Motor Valley Fest on July 1-4, 2021, however.

The Benelli Museum In Pesaro Reopens Its Doors To The Public

Spain's Bassella Motorcycle Museum Reopens To The Public In 2021