It Looks Like Indian Is Building A New Liquid-Cooled Bagger

Surprise, surprise—it looks like Indian’s going to expand the Challenger lineup. New patents filed in the U.S. show a bagger with the PowerPlus 108 engine but different bodywork than the existing Challenger model.

Before Polaris shut down its Victory Motorcycles subsidiary in 2017, there was considerable talk of a new liquid-cooled touring bike. Victory already had the liquid-cooled Octane, but that was more of a stripped-down roadster, and people were expecting something bigger. Obviously, that wasn’t going to happen for Victory, but in late 2020, we got the Indian Challenger with the all-new, liquid-cooled PowerPlus 108 V-twin.

The Challenger came to market with a huge, frame-mounted fairing similar to Harley-Davidson's Road Glide. That design doesn’t work for everyone, though. Some riders prefer handlebar-mounted fairings, and that’s what we see with these new Indian patent drawings. The batwing fairing design looks very similar to the Roadmaster’s fairing, complete with a big, single headlight.

It’s definitely a more traditional V-twin bagger look, with patent drawings depicting a full-sized touring windscreen. No doubt there would be a shorter windscreen available as an accessory, or perhaps a stripped-down version of the bike with leaner, meaner bodywork, probably bearing the Dark Horse name.

Speaking of names—we haven’t seen any really strong hints as to what Indian might call this bike. For that matter, the patent application is no guarantee we’ll even see this machine hit production. However, with emissions regulations cracking down on air-cooled engines, the Thunderstroke 111-powered Indians will almost certainly get the axe in the not-too-distant future. Indian has versions of the Thunderstroke cruisers with frame-mounted fairing, and versions with fork-mounted fairings. It would make sense to bring that through with the new liquid-cooled Challenger lineup, as these bikes are almost certainly going to carry the company through the 2020s. 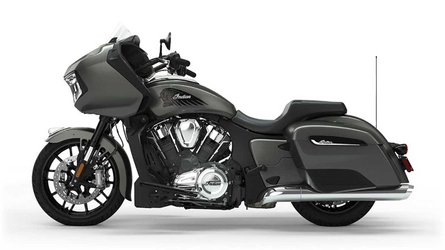 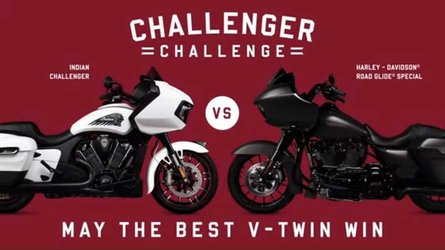