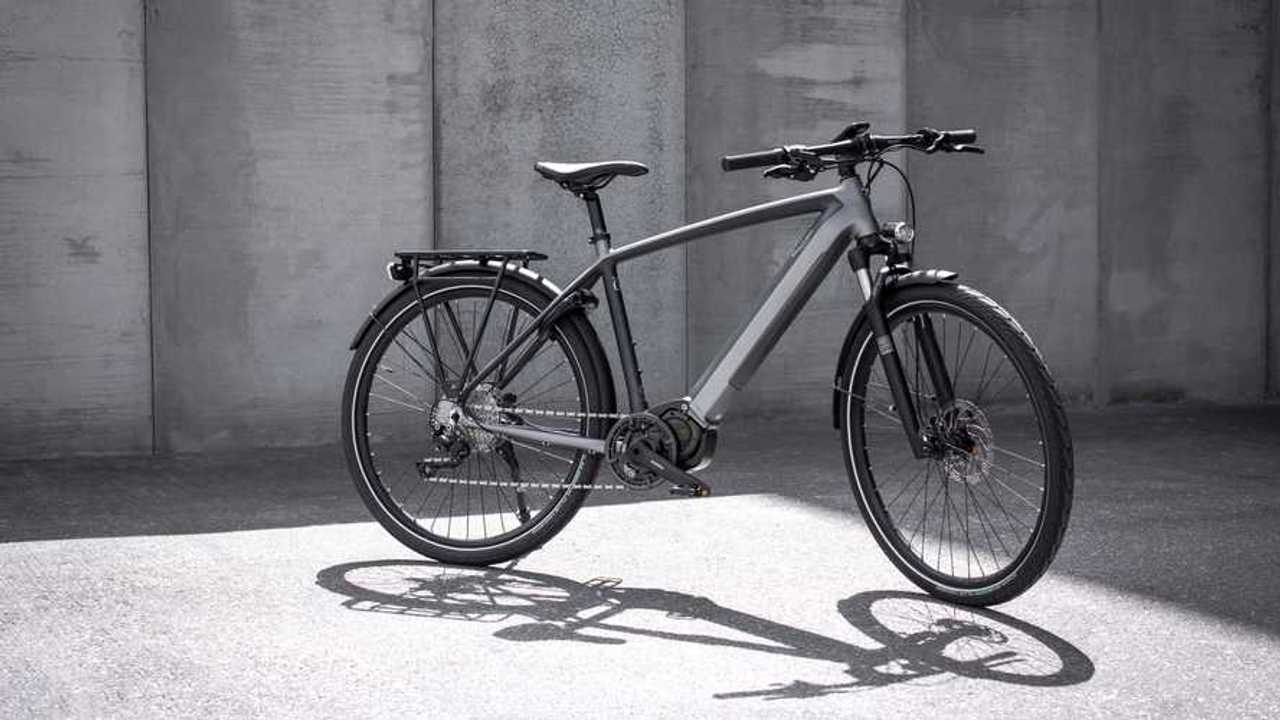 Triumph is taking a step in the electric direction, but maybe not in the way you’d expect. The folks at Hinckley are launching the brand’s first-ever e-bike, the Trekker GT. That’s right, it’s an electric bicycle, not an electric motorcycle. Now, that’s not to say Triumph won’t do an electric motorbike further down the line, just that they aren’t doing it in June 2020.

The Trekker GT features a 250w 60Nm (that’s 44.25 lb.-ft) Shimano powertrain, which utilizes a 504Wh Shimano battery. Estimated range on a single charge is 150 kilometers, or 93 miles. The lightweight frame is made of 6061 hydro-formed aluminum, and that integrated battery is also lockable for added security. RockShox Paragon forks with 65mm travel support your ride in front, while a Selle Royal Vivo saddle supports you in the rear. Shimano Deore M6000 180/160 brakes bring you to a stop as and where you tell them to.

The Trekker GT also comes with some nice little bonus features as standard. Integrated LED lighting, full length black mudguards to encourage you to ride in all weather, a blacked-out pannier rack, and an ABUS pro-shield integrated lock all come with purchase, and additional accessories are available through Triumph as well. It’s worth noting that with all the bells and whistles, this entire e-bike weighs just 2.88 kilograms, or about 6.35 pounds.

It’s available immediately in the US, UK, and Europe (minus Germany and Austria). Triumph says it’s still determining availability in Asia Pacific markets at this time. Pricing will vary based on geographic location. The UK price starts at £2,950, or US $3,719, and the official US price is not yet listed on Triumph America’s website.

Of course, Triumph isn’t the first moto manufacturer to head down the primrose e-bike path. Ducati led the charge back in 2018 when it introduced its MIG-RR, which used a different Shimano Steps powertrain. Car makers have been getting in on the e-bike action as well, from the Ford Super Cruiser to GM’s short-lived Ariv e-bike project. For some, like Peugeot, it’s even something of a re-imagining of the company’s own history. Why are bike manufacturers and auto-makers both very quietly shifting gears into the e-bike realm?

The simple answer: money. In December 2019, influential accounting firm Deloitte released its annual technology, media, and telecommunications predictions. In it, the company predicted worldwide sales of 130 million e-bikes between 2020 and 2023. This major shift is due in large part to lithium-ion batteries replacing the old lead-acid batteries frequently found in e-bikes as recently as 2016, according to Deloitte. Hitting a sweet spot between light weight, range, convenience, power, and comparatively low prices has resulted in e-bikes becoming the highest-selling electric vehicles on the market today.

Clearly, both product development and determining a company’s future direction take time, so all these OEMS have obviously been working on their e-bike strategies well before 2019. However, Deloitte’s most recent 2019 report only serves to underscore what it and other analysts have been pointing to for the past few years, which is why we’re seeing entire industries shift in this direction over time.

Although the U.S. hasn’t seen a spectacular uptick in e-bike sales at this point, they’ve been taking off around the world for the past few years. Most European countries reported significant sales growth in the sector, including in Germany, where 2018 e-bike sales rose 36 percent according to Deloitte. That makes it seem all the stranger that the Triumph Trekker GT isn’t available in Germany off the bat, so we can only assume that they’re working out some last-minute hurdles and it will be available there shortly.