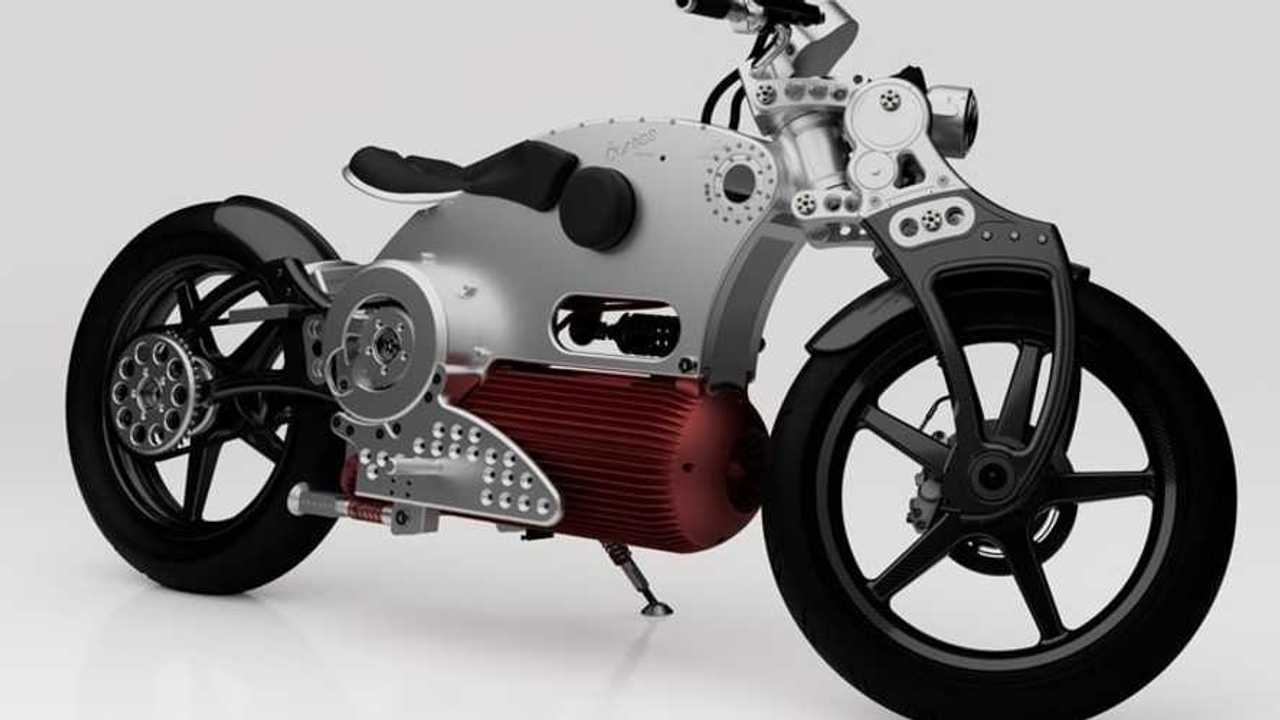 Yet another nifty design has come out of Curtiss Motorcycles. Rather than a brand new design, this one is based on the Hades that we saw last year. The evolution of that design is creatively called the Hades 1.

A Cold Day In Hades:

Curtiss To Bestow The Zeus On Us Mortals

Although the fundamentals of the design are the same, the thinner pistol-like design is gone. The bullet-shaped battery pack is now firmly attached to the bodywork instead of hanging out in space like the previous design. The entire bike looks a bit more like the block that the original Hades seems to have been carved from. It's still an aesthetically pleasing look, just different than the original's more minimalist design. The colors are also reversed, with a silver body and the battery taking the rusty red that the previous version's small body used to be, or matching the silver body.

Another interesting design aspect is the adjustable rake angle. The "short wheelbase" version has a 27-degree angle, which gives the Hades 1 a 62-inch wheelbase and 8-inch ground clearance. Switching to the "long wheelbase" configuration gives you a 31-degree rake, 64-inch wheelbase, and 6-inch ground clearance. These aren't vast differences when it comes to the numbers, but they are differences that you would notice in the bike's handling on the road—that is if this bike exists in the real world. Despite all of the fresh designs that have come out of the Curtiss studio, we still haven't seen them outside of cyberspace.

The drivetrain is the same as the original Hades. Curtiss quotes multiple power and torque figures. The 217-horsepower figure of the previous design is now listed as its "Peak Operating Output" rating, but they also list a 96-horsepower "Capable" and 49-horsepower "Steady" ratings. Exactly what those mean is not immediately clear. The previously quoted 147-lb-ft torque figure is now its "Capable" rating, and there is a new stump-pulling 272-lb-ft "Peak Operating Output" figure. (That's more torque than my Subaru WRX.) It's possible that Curtiss has measured the electric motor's output to these peak ratings, but has electronically limited the performance down to these "Capable" ratings for rideability, safety, or other reasons. Curtiss says they will provide "Fully adjustable tuning via cloud-based software updates."

Many more specifications are now available on Curtiss' website. The price, which we originally quoted as $75,000, has been reduced to $60,000, with a $1,500 non-refundable order fee on top of that. That's still a significant chunk of change. Curtiss says the Hades 1 will be available for sale in the late spring of 2020, which would mean that what we see here must be pretty close to production-ready. That's also consistent with last year's claim that the original Hades would be available sometime in 2020.

Curtiss has made a bold move abandoning its previous internal combustion customs to focus on electric bikes. It does make sense, though. No longer are the designs limited by traditional internal combustion requirements. Electric motors can go anywhere and batteries can be any shape and size, which vastly increases the designers' creativity. I hope to begin seeing some actual Curtiss electric bikes on the road soon.