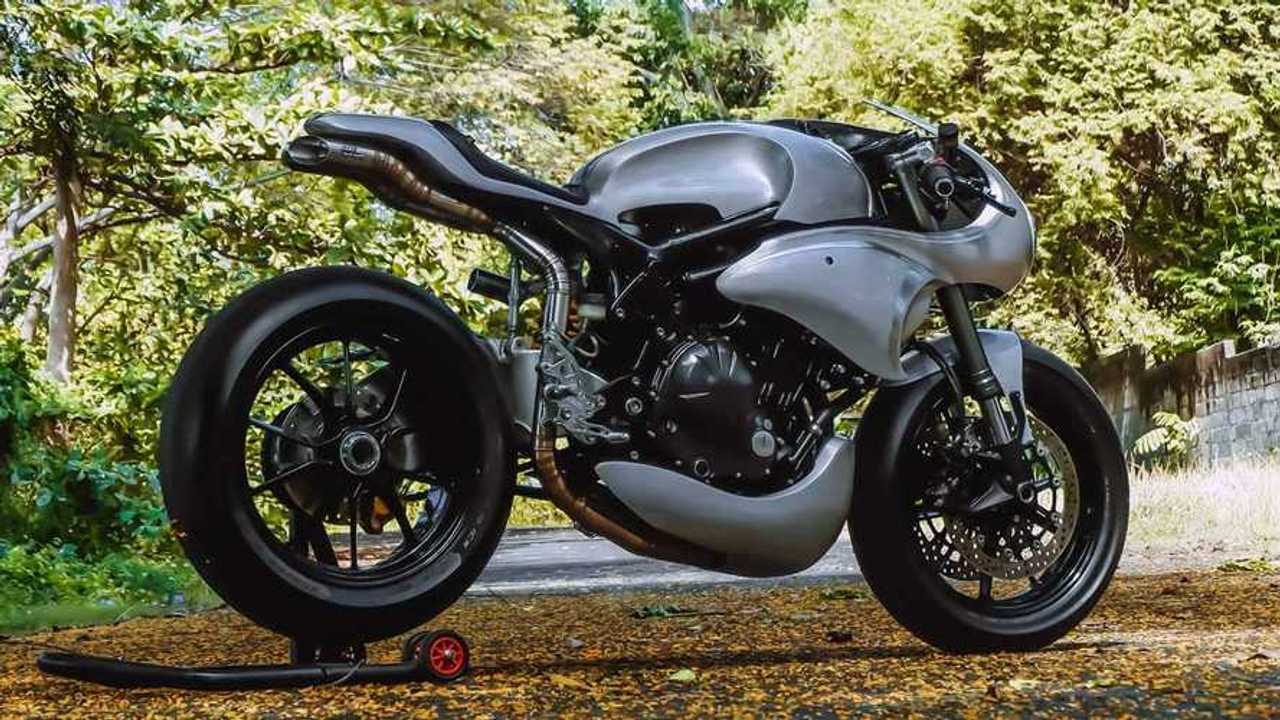 Establishing a recognizable style is important for a custom motorcycle shop. The last time we checked in with Indonesia’s AMS Garage, they were showing off a custom CB650 dragster named the Pitbull. When the team scored an invitation to the 2019 Mooneyes Yokohama Hot Rod & Custom Show on the back of that hardtail Honda, they took advantage of the creative momentum and built three new bikes. This Kawasaki ER6n cafe racer is a part of that prolific period and provides AMS Garage another chance to spotlight its bare-metal bodywork.

When shop owner Ajus Mulyawarman set out to top his CB650 custom, he turned to the same pitbull inspiration and hand-shaped alloys that brought him so much attention before. This time around, the Bali-based custom garage chose to beef up the design with additional fairings. Nicknamed the Bully, Mulyawarman added a belly pan and one-piece fairing to resemble the stout posture and broad shoulders of American Pitbulls.

Removing all factory plastics, the team made sure the bodywork shined with polished sections breaking up the grain-prominent aluminum panels. The ebb and flow of the integrated tank and tail section also added to the muscular shape of the bike. A minimal fender up front and pie-cut custom exhaust snaking its way to the back completed the metalwork for the build.

Under the skin, Mulyawarman knew he had to improve the handling of the ER6n so he retrofitted the front end of a ZX10R and installed an Ohlins monoshock. The team later repurposed the single-sided swingarm from a Ducati Panigale to achieve the aggressive stance of the Bully. The Panigale also contributed cast alloy wheels to the build, which AMS clad in a set of Metzeler slicks.

To change the rider ergos, the team turned to aftermarket rearsets and clip-ons from the ZX10R. A custom saddle, LED headlight, side-mounted brake light, and bar-end indicators round out the custom work on the Bully. Aside from the new exhaust, Mulyawarman didn’t tinker with the ER6n’s parallel-twin and it still pumps out 72 horsepower.

The team unveiled the custom Kawasaki ER6N in October at the Kustomfest Show in Jogjakarta, Indonesia. While the Bully and the Pitbull have done a lot to establish a trademark style for AMS Garage, we look forward to the future customs from the Bali-based custom shop.

Source: Return of the Cafe Racers