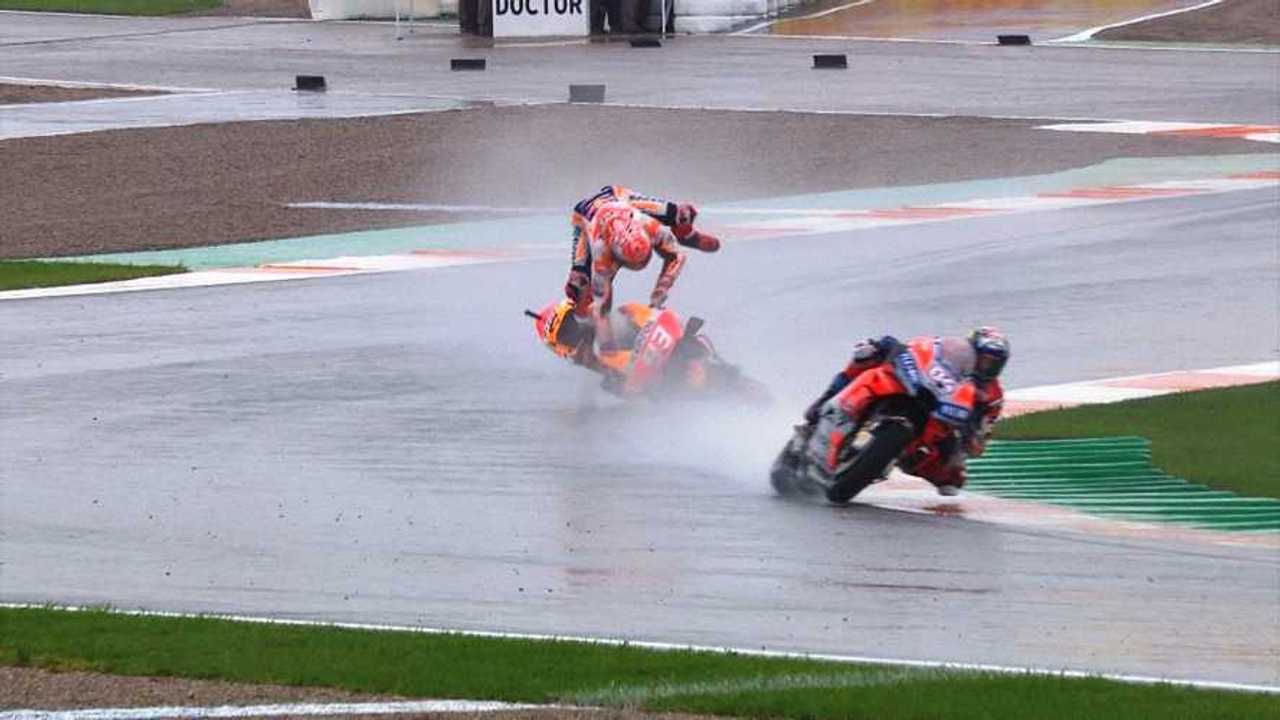 Marc Marquez had already clinched the MotoGP Championship but still raced hard at a wet Valencia.

Marc Marquez didn't even have to show up in Valencia, Spain for the last MotoGP race of the season, he had already clinched the championship title, but you can't blame a racer for wanting to race. Unfortunately, the weather this weekend was not anyone's friend, and Marquez wasn't the only champion to throw his bike down the slippery track; Rossi got in on the fun too. However, Marc brought things to a whole other level of dedication when he crashed in the qualifying race, dislocating his shoulder again, yet went back out and managed to snag the fifth spot on the grid and start the main event.

MotoGP riders race in the rain, but things got so wet and messy at Valencia that the race was stopped by a red flag at lap 14, and restarted once it cleared. Within those first 14 laps though, were crashes involving Aleix Espargaro, Jack Miller, Danilo Petrucci, and Andrea Iannone, with Marquez crashing again and walking off too badly hurt to get back on the bike. Valentino Rossi, Andrea Dovizioso, and Maverick Viñales were right behind the leader, Alex Rins, when Maverick went down on the 13th lap. Bradley Smith and Franco Morbidelli went down as well before the race was red flagged.

As the red flag flew halting the race, Dovi and Rossi had just managed to pass Rins when the leader went wide and managed to save it, but officials choose to line up the restart based on the end of lap 13. The 16 riders who were still racing on that lap were lined up, with Rins, Dovi, and Rossi in the top three positions. By the end of the second restarted lap, Dovi was once again out front, and the top three bikes were pulling away from the pack by two seconds a lap.

As the race went on, Dovi was pulling further and further ahead, and on the eighth lap Rossi went down in a spectacular shower of sparks trying to catch him.

Leading by three seconds by that point, there was just no stopping Andrea Dovizioso who took the win on his Ducati in this final race of the season. Alex Rins took a much deserved second place on his Suzuki, after leading so much of the race. Third place went to Pol Espargaro when Rossi crashed out, but he fought off a challenge from Michele Pirro on a Ducati to bring home KTM's first podium finish in the top MotoGP class.

In his final race of his final season before retirement, Dani Pedrosa managed to bring his Repsol Honda home in fifth place on what is considered his home track, in front of a crowd of ecstatic, if wet, Spaniards.