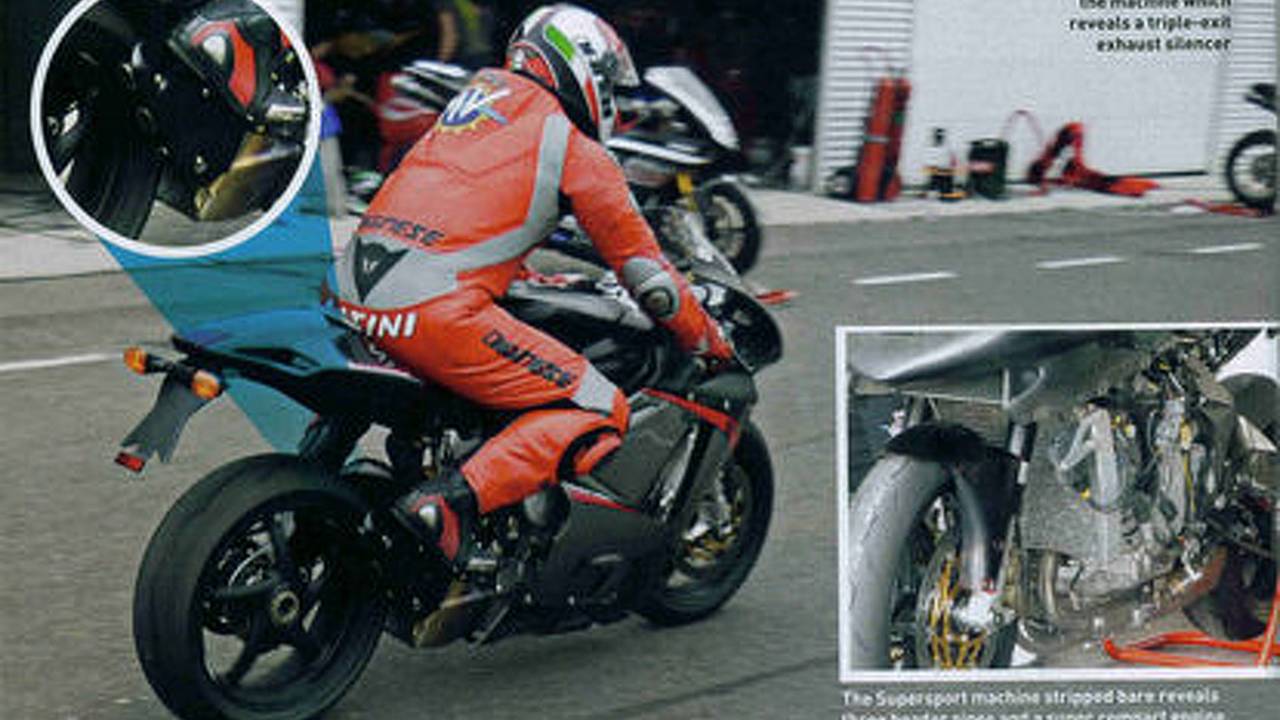 We spy with our little eye...

The MV Agusta F3 has been spied at Almeria again, this time looking a little closer to production despite the continued use of ill-fitting F4 bodywork. What's new? How about the incredibly sexy three-exit GP exhaust for starters.

We're actually relieved to see the new exhaust arrangement. One of the defining features of the original F4 when it was released wayyyyyyy back in 1998 was the four underseat exhaust pipes, but when the 2010 MV Agusta F4 was released, it didn't break any new styling ground, shamelessly copying the old bike and its exhausts. Not only does this new arrangement look good in and of itself, it indicates the rest of the bike stands a chance of not aping the F4, which is a good thing.

This shot appears to come from Australian MCN, which reports that the day this was snapped, the test rider was also evaluating key rivals like the Triumph Daytona 675, Kawasaki ZX-6R and the Yamaha R6. The F3 is expected to benchmark those bikes, but we expect it to be considerably more expensive. 600s (or 675cc-ish triples) cost as much to develop as liter bikes yet consumers typically expect them to retail for substantially less. Pitching the F3 as an up market alternative with fancy running gear like the single-sided swingarm could help bring that consumer expectation up to a realistic price point for MV to make a profit.

It appears, at least judging by these pictures, that the F3 uses a similar frame arrangement to the F4, which means a tubular steel trellis attached to cast aluminum swingarm pivot plates.

Harley-Davidson is currently trying to unload MV so The Motor Company can better focus on novelty thong production in the far east. According to MV Agusta USA spokesperson Matthew Stutzman, that means the F3 project is essentially stalled in an advanced stage of development, awaiting a successful sale and a fresh injection of Euros before it can be rolled out to the public.

According to our latest information, Claudio Castiglioni and Federico Minoli have been joined in competing for MV ownership by two anonymous American entrepreneurs, one of whom is said to have worked for Ducati previously. We'll keep you updated.

Make sure you check out our previous MV Agusta F3 spy photos.