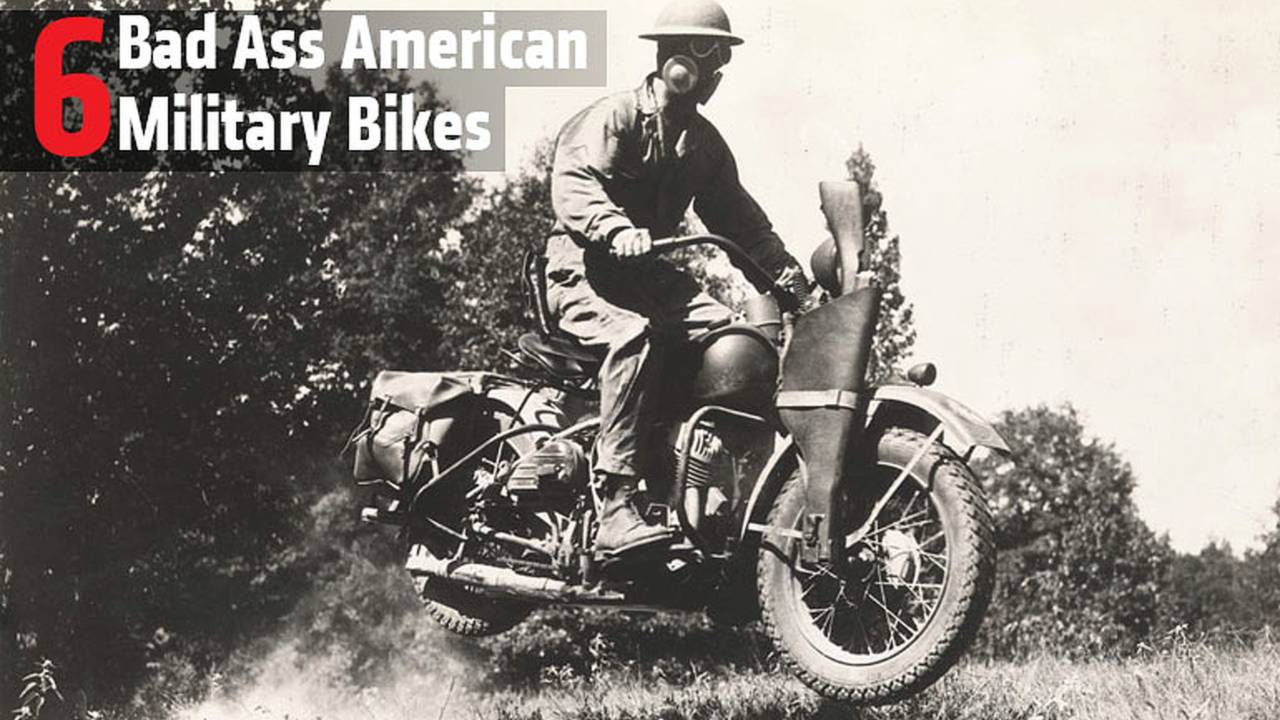 6 Military Bikes that keep America safe and show the enemy we know what the hell we are doing when it comes to combat with any vehicle.

The American military has had a contentious relationship with the motorcycle: in World War II they were replaced by the Jeep, and for half a century they didn't turn up much. But the iconic motorcycles that did serve are ingrained in American culture: returning servicemen with surplus bikes gave us bobbers and choppers, and dirtbikes in the 1980s gave us Delta Force. It's up to you to decide which one of those is more significant.

Harley-Davidson eased slowly into WLA production in 1940, before the US entered World War II. The firm would go on to build 90,000 examples of the Army bike, taking the civilian WL and stripping the paint, adding blackout lights, and relocating the crankcase so it could ford water. It was cheap, it was built en masse, and when the war ended, so many soldiers rode around newly-freed Europe that the bike became known as the "Liberator."

Into the war, the government asked Harley to build a bike that was similar to the BMWs used by the Germans. So they did—to exacting specification. The 740cc flat twin and shaft drive aped the R71 perfectly. Harley built 1,000 XAs and even used the platform to test its first telescoping fork. Alas, the Army replaced the motorcycle for the Jeep, and the latter subsequently fell into world history.

In 1941, Indian was tasked with building motorcycles for the desert, and they came up with this: girder forks, a V-twin like a Moto Guzzi, and shaft drive. Like the Harley above, it was influenced by the BMW R71. And like the Harley, the government also passed up the Indian—for the same reason. But the 841 did set the template for future Chiefs that would roll out of Springfield after the war ended.

It took Harley-Davidson four decades to go back into the military motorcycle business. And they did so with some help from the British: the Armstrong MT500, a Rotax-powered single, served with the British Army during the Falklands War. Harley licensed the rights in 1987 and evolved it into the MT350E, which had a smaller engine, but at least it came with electric start. They're quite popular in England, where civilians storm through traffic with minimal fear of getting nicked by shiny Vauxhalls.

You can buy one of these badass diesel motorcycles, with its 670cc, four-stroke diesel single inside what's basically a Kawasaki KLR650 chassis. It has 33 horsepower, it can ford two feet of water, and it can go 400 miles before refueling with the nastiest rotgut diesel (or biodiesel, or kerosene, or jet fuel) you can toss in it. It won't be cheap, however: $18,500, which might explain our national deficit.

DARPA is funding a secret, hybrid-electric motorcycle that has two-wheel drive, runs on diesel and gasoline, and can operate on batteries alone for complete stealth. Imagine creeping into enemy territory for an hour in complete quietness. Imagine powering your batteries with tasty, tasty JP8. Imagine firing rockets like Chuck Norris. If you take back the last part, that's the future of the American military motorcycle. In fact, we're probably not allowed to talk about this.