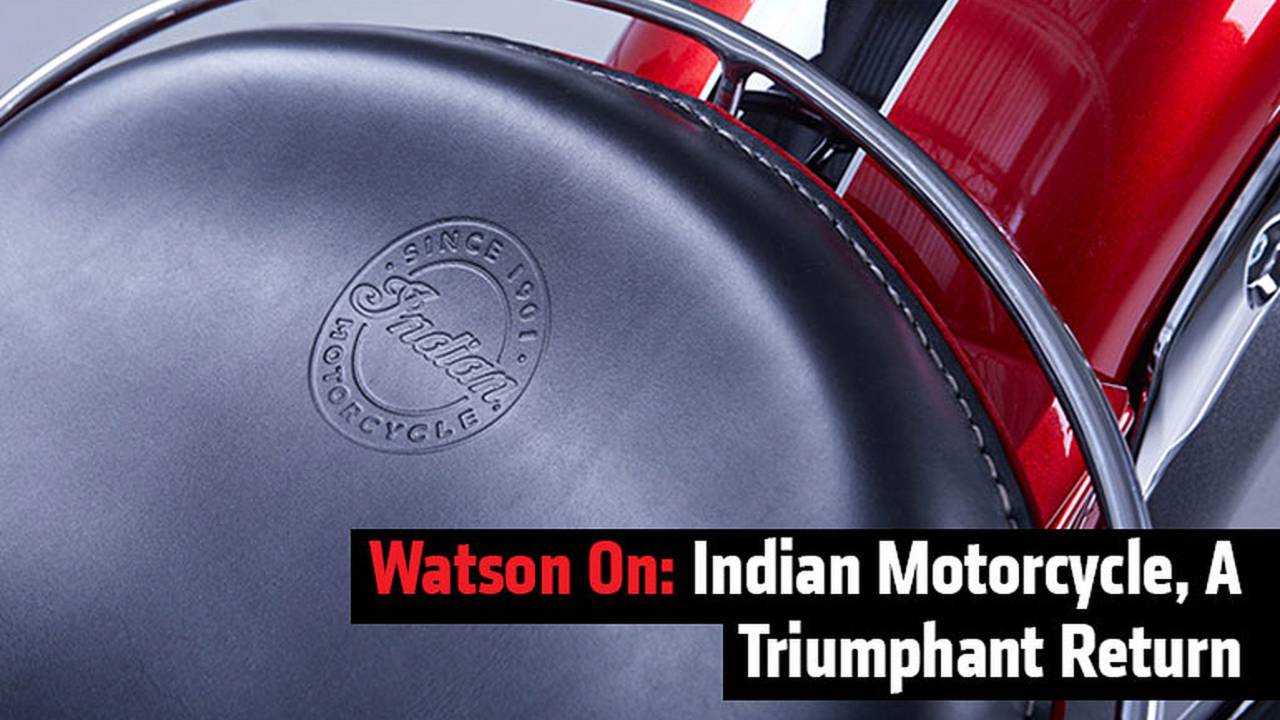 Indian Motorcycle is poised for one of the greatest comebacks in bike history. What exactly do they have up their sleeve though?

Over the years, I have lost count of the number of motorcycle companies that have come and gone. Some went down in a blaze of glory and despite having some terrific motorcycles, shut up shop due to lack of finance, poor management, or a combination of both.

Some definitely deserved to close their doors as they were woefully out of touch with their customers and consequently consigned to the history books. I do struggle a bit with famous motorcycle names from the past being resurrected. A storied brand, set up again in name alone by well-meaning enthusiasts who plan to make expensive, oddly engineered bikes that have absolutely no connection with the company of the past.

Most of them, I think, will never make it simply because the huge costs involved in manufacturing good modern motorcycles that people will want to buy is beyond their reach. A senior executive once told me that in order to make a small fortune in the motorcycle industry you have to start with a very large fortune.

Chances are most of these brands of the past will disappear again until someone else comes along with a great plan on how to restart a motorcycle company using an old name and I’m afraid it will all go the same way again with the inevitable consequences. I really can’t knock them for trying though.

Things are a little different at Indian Motorcycle. This is, as we are constantly reminded, America’s oldest motorcycle company. It officially shut up shop in 1953 but then went struggling on for years and years as myriads of inept owners and consortiums tried to make it a success and failed miserably. The company went bust more times than I can count and quite honestly should have been consigned to the history books too.

But then along came Polaris Industries in 2011 with a vision of the potential of the brand. Polaris purchased it, invested in it and has worked out a long-term plan that looks like it might actually succeed.  Finally, one of the most enigmatic motorcycle names looks like it’s back on track. In less than two years with Polaris’s money and engineering expertise, Indian has a range of proper motorcycles again that went on sale in October of last year.

Before some of you reach for your guns, yes they are cruisers and yes they rely heavily on the look and style of Indian’s past, but these first motorcycles under Polaris’s stewardship are genuinely good bikes if cruisers are your thing, well designed and very well executed.

Last week RideApart was invited to come and see some of the things Indian Motorcycle is working on for the future and to my eyes it looks pretty exciting. However, there was an unfortunate caveat to our invitation by Indian, we’re not allowed to write about their plans until the summer. However, what I can tell you is this.

At the beginning of last year Indian Motorcycle had just 13 dealers in the U.S. At the end of the year it had 70 retail stores and there are now a further 140 dealers signed up that will open in the near future. Indian won’t tell us who they are or where yet as it says that it wants to announce them as and when the dealerships are built and ready for business.

This media meeting was held at one of the newest dealerships in the U.S. in Southern California and purely on aesthetics and layout of the dealer showroom alone it’s clear that the current Indian Motorcycle management understands the brand. It’s modern, different and with a nod to the company’s past and even if you’re not into Indian I promise you it’s well worth going to visit your nearest dealer just to take a look.

But what about new bikes? Indian Motorcycle executives said that in the 12 months it has spent $20 million of Polaris’s money on a new production plant and has doubled the size of its Wyoming R&D facility (serving both Victory and Indian) both in terms of people and the facilities. This we’re told is for future motorcycles that we can expect to see from Indian Motorcycle in the coming years.

When you ask them what type of bikes, the Indian Motorcycle executives remain coy and simply state: “We can’t tell you that. But what ever we do next has to be done right. Going faster as a business doesn’t necessarily mean better.”

My money is on the next bike being something similar to the Indian Scout that the original company was built upon and proved to be exceptionally popular. Smaller capacity than the current Indian Chiefs, lightweight, nimble and a blast to ride. There’s also the motor sport heritage tied to Indian Motorcycle. It comprehensively ruled the roost on the flat tracks of the U.S. in its hey day, so would it really be too outlandish to think that maybe a sport bike could be considered in the secret R&D base in Wyoming? Indian Motorcycle is not saying or confirming anything except to suggest that we haven’t seen anything from them yet by a long chalk.

I’m not one to always accept a motorcycle company’s PR blurb at face value, but there is a genuine quiet confidence amongst the Indian motorcycle team. They clearly have a plan that is based on a respect for the brand, an understanding that Indian can’t live in the past and needs exciting modern motorcycles to succeed. On top of that, with Polaris’s money and huge expertise across the whole group there seems to be a genuine intention of putting Indian back in its rightful place as America’s number one motorcycle company. Time will tell but I’m excited for its future. Indian Motorcycle has never looked so good.