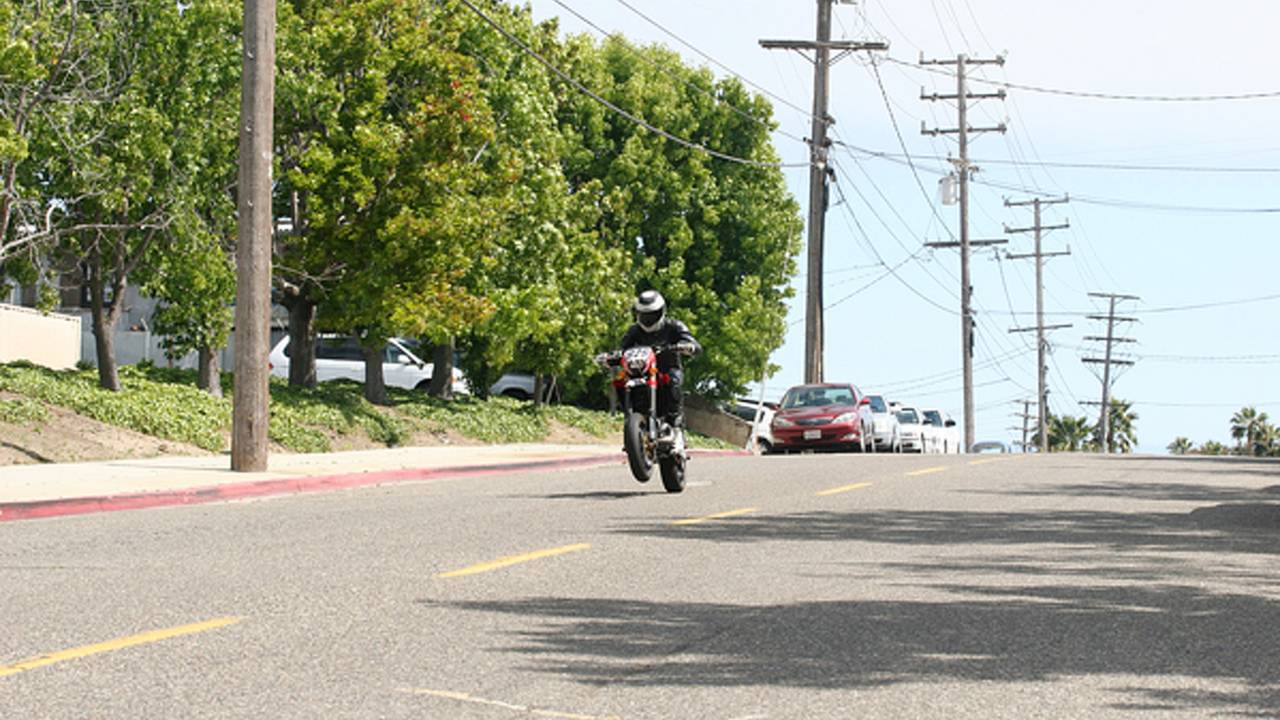 I'd heard of Boyko Racing's mythical beast for weeks before actually seeing or riding it. Wes told me "it's the fastest bike he's ever ridden and Uncle Ted's an ex-racer." Ted himself told me that it's got a 2mm overbore, gigantic pipe, killer tune and special blend of gas in the tank. Now, neither he nor Wes are all that familiar with my dirty past, but suffice it to say that when someone says th...

I'd heard of Boyko Racing's mythical beast for weeks before actually seeing or riding it. Wes told me "it's the fastest bike he's ever ridden and Uncle Ted's an ex-racer." Ted himself told me that it's got a 2mm overbore, gigantic pipe, killer tune and special blend of gas in the tank. Now, neither he nor Wes are all that familiar with my dirty past, but suffice it to say that when someone says they've built a really gnarly dirt bike or supermoto, I'm skeptical.

When I worked for Thumper Racing, my job was basically to think of what would make a good motor package, figure out how to technically execute it, help to tune it both in the real world and on the engine dyno and further refine (different cam, higher or lower compression, etc) it until we believed that it couldn't get any better.

It sounds like a pretty neat and easy thing to do until you start thinking about that real world testing. How, exactly, do you test the powerbands of the most powerful MX bikes in existence at wide-open throttle in every gear? Well, you need a guy to ride the bike from idle to redline, at wide-open throttle, in every gear. I was that guy and I've ridden some seriously fast bikes. KTM 530s with our 610 kit. 525s that were taken out to 640 with giant sized pistons and stroker cranks that weighed less than the stuff the factory put in there, 15:1 compression and cam lobes that looked almost comically huge. I never got good at holding a wheelie, but I can certainly use the rear brake to manage them.

This survival technique came in handy while riding the BoyKo Racing Husqvonda. Full disclosure: I never learned how to properly wheelie. I understand all the concepts, use the clutch to get it up, use the rear brake to balance it on the rear wheel, don't fall over sideways, stay smooth, but I've never tried to apply them. When I was asked to wheelie for the camera, what I ended up doing was full throttle acceleration runs in the first four gears and letting the bike do its thing. What it lacked in endless smooth power compared to the old TR bikes, it more than made up for with scary two-stroke torque and wheelies. Have I mentioned that this thing is ridiculously fast?

After flying by the cameras with the front wheel in the air and the throttle twisted to the stop, I'd grab a hand a handful of front brake and stomp on the rear for good measure--my boot was there anyway, still covering it to keep the front end from coming up too high. Sometimes, this resulted in wicked stoppies. Other times, it was big brake slides. Neither could be described as relaxed or low key. Then again, the kind of person who wants a CR500 for the street probably isn't looking for those traits.

What goes into building a bike like this? Well, a Husky 510 supermoto comes from the factory with a 501cc four-stroke single. It's nothing to laugh at. Depending on who you ask, it makes up to 60bhp. That's if you don't ask me, I know that to be complete bullshit. Figure 48bhp. It showed up at Boyko Racing with this motor, albeit in broken non-running condition. The bike's owner asked, probably as a joke, if they could just put a CR500 motor in it. That's where things got weird. Boyko Racing saw no problem with this, sourced a CR500 motor and proceeded to hack up the frame to make it fit.

Relax, Uncle Ted knows what he's doing. If you didn't know what you were looking at, you'd assume the frame came from the factory that way. The welds are perfect, the bends are extremely smooth and the whole thing was powder-coated black once it was confirmed that the CR500 motor, pipe and intake boot fit. That motor has been treated to an aggressive port job, Pro-X 2mm over-bore piston from LA Sleeve and custom lighting coil. The pipe is also a custom unit that been built to match the porting. The aluminum airbox, visible from the rear of the bike, is a custom solution as well. It doesn't sound like much work, but then again, there really isn't all that much to a two-stroke. A fresh piston, good port job and a pipe that's matched to the porting is all that's needed to turn a CR500 into a fire breathing monster.

Why not just build a CR500 supermoto? Well, for starters, the customer owned a Husky. The frame and suspension on a CR500 isn't exactly top-notch either. Also, this bike has a license plate. Good luck getting one of those for a CR500.

With a four-stroke, the stock Husky donor bike weighed in at 260lbs. Figure a reasonable reduction in weight from the Honda motor, plus an increase in power. Stock CR500s make 64bhp, but with these mods, I'd hazard a guess that this one's making around 72bhp.

Uncle Ted attempts to start the Husqvonda. You can see how excited Sean is to ride it.

My time on the bike was short and sadly didn't include any knee-dragging canyon or racetrack action. Talking later in the shop, I learned that it wasn't actually done yet. Up next was a thorough redo of the suspension and a more modern carburetor to make it easier to start. There's also that racetrack action. Uncle Ted invited us to join them at Grange, where I usually race my XR100, to ride the Husqvonda in a more appropriate environment. I can't wait.

Located in Costa Mesa, Boyko Racing specializes in the kind of dirty work and custom builds that other shops won't touch. They do that surprisingly cheaply too.