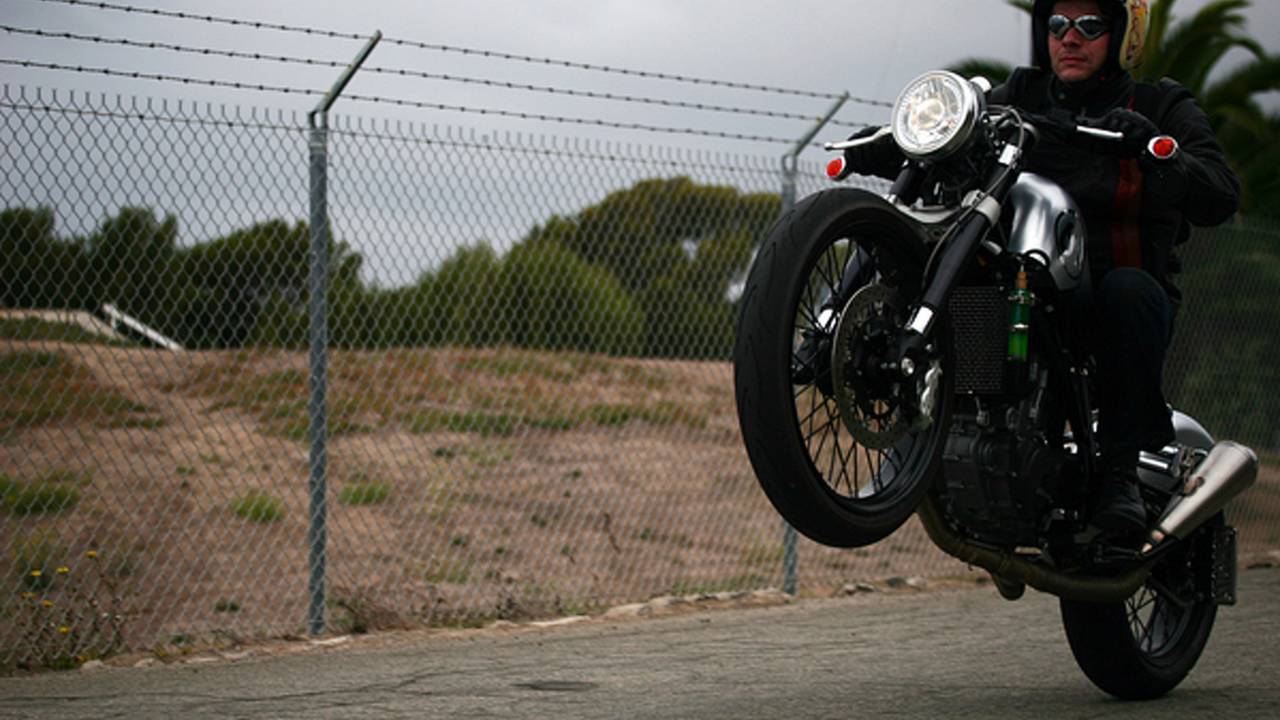 Sven Etzelsberger is not your average garage builder. The soft spoken automotive designer works at Fisker and also has a background in metal working. Rather than spending $15,000 on a GS for his next bike, he decided to take that money and build something special; this single-cylinder KTM bobber. NSFW: boobs and wheelies after the jump. Photos: Sean Smith "In my normal work, I typically don't...

Sven Etzelsberger is not your average garage builder. The soft spoken automotive designer works at Fisker and also has a background in metal working. Rather than spending $15,000 on a GS for his next bike, he decided to take that money and build something special; this single-cylinder KTM bobber.

NSFW: boobs and wheelies after the jump.

"In my normal work, I typically don't fabricate anything with my hands. I design it. I engineer it. So it was actually nice having a garage project where I create something with my hands and put it into place, where typically, I only design."

Sven's Bob Racer is crafted from a 2007 KTM 690 Supermoto. "It had to remain rideable; it had to be fast. That's why I decided to go with a KTM. I wanted to build something unique, something that no one had done before so I didn't want a v-twin in it. Everyone builds a custom bike with a v-twin in it. Everyone. I almost started with a 990 KTM as a base or a Ducati two-cylinder, which would be nice as well, but then it would have been a much heavier bike again and I thought keeping the weight low and making it really easily maneuverable and nimble would really enhance the fun of riding it. So I went with a single cylinder, smaller engine."

Even though it looks radically different, much of the original bike is still there; the motor, frame and swingarm are unchanged. Exhaust is from Zard: "The exhaust system is an Italian Zard system that they made for the 690 Supermoto. It was just visually a perfect fit to the bike, it was a really lucky find.”

The lighting and seat are from eBay, Forks are cut down about 8 inches and the shock was shortened to match. "It's a little bit on the hard side, so you don't want to go over too bad roads, but it's still got enough suspension to have fun and not shake your fillings out."

Stock hubs are laced to 18" rear and 21" front wheels and wrapped in sticky Conti Attack rubber. All non-essential parts were stripped from the bike before the new subframe and tank were added.

“I had to learn how to weld aluminum; I’ve never welded aluminum before. It was my personal challenge because at first I thought: ‘I’m gonna make it out of steel, 'cause I know how to work with steel,’ but I thought ‘I need some challenge’ so it was going to be welding the aluminum.”

Underneath the pretty lady is an 18g steel tank. “I did not fabricate that myself, but I made the form out of it out of a big piece of Styrofoam, cut it with a knife, bondo’d it and sanded it to shape and then gave it to a metal fabricator who then made the fuel tank for me."

Rather than sending his custom tank to a painter, Sven had it chromed. "It’s a special chroming process. Chrome always consists of first copper, then nickel and then chrome. And the chrome layer is really thin, so in this case, before the chrome layer was put on, part of the bodywork was bead blasted to give it a frosted appearance and the stripes and the graphics were taped off.”

A 690cc motor was the only excuse needed to put a big, chrome '69' on either side of the tank.

"Getting the prowess of a cafe racer; getting a light, nimble, fast bike; but then also still getting the style of a bobber" was Sven's intention.

"I always liked the single seat with the springs. I like the wrapped exhaust. It's got this attitude going. It's not all just purpose, it's also got some attitude. But then it's also got the performance of a cafe racer. That combination is what drew me to it."