From MotoGP to the Indy Mile: Roland Sands' Desmo Tracker 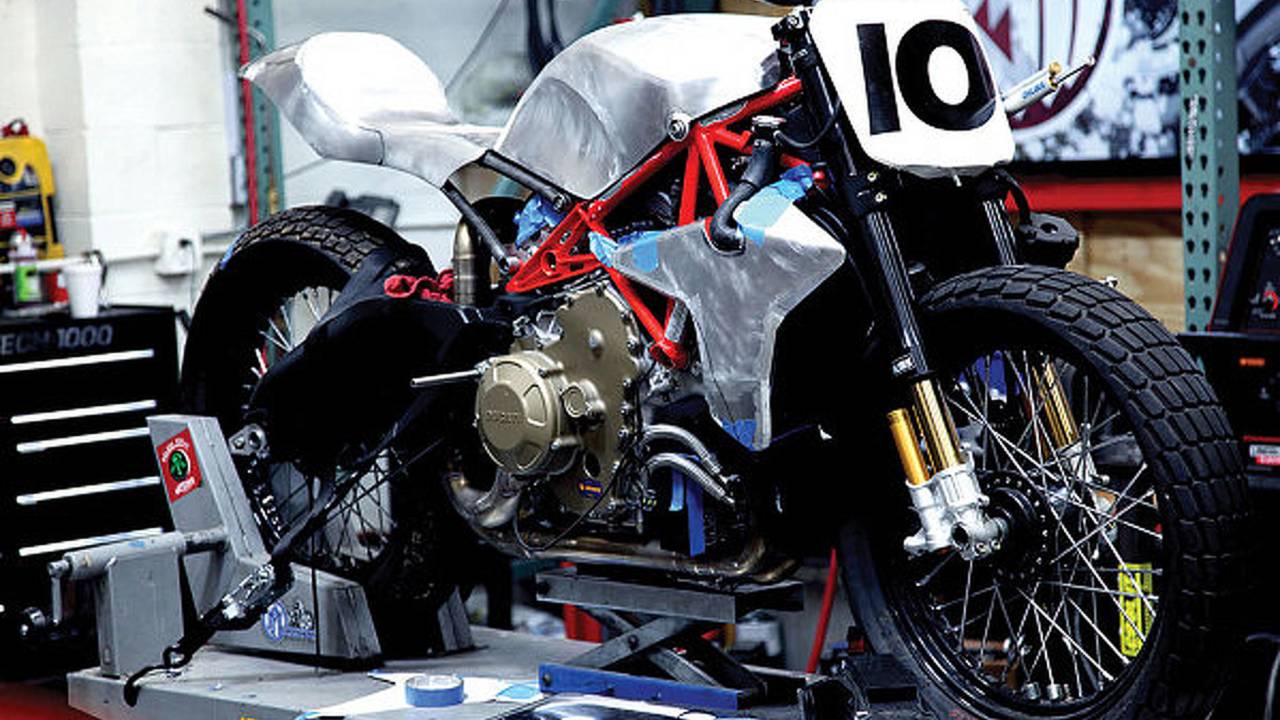 Exclusive to Hell For Leather, this render and these photos show what the finished Roland Sands Design Desmo Tracker will look like. If you haven’t heard yet, Roland’s finally lost his marbles, building a flat track racer based on the limited-to-1,500-units, MotoGP-replica, 197bhp Ducati Desmosedici RR. With permission from his doctors, we asked Roland what the hell he was thinking. HFL: What...

Exclusive to Hell For Leather, this render and these photos show what the finished Roland Sands Design Desmo Tracker will look like. If you haven’t heard yet, Roland’s finally lost his marbles, building a flat track racer based on the limited-to-1,500-units, MotoGP-replica, 197bhp Ducati Desmosedici RR. With permission from his doctors, we asked Roland what the hell he was thinking.

HFL: What the fuck is wrong with you, building a Desmo tracker?

Roland: Yeah, it’s a horrible concept. Just fucking horrible. I cringed at the idea initially and then slowly it turned on me like a rabid dog. Truth is, I’ve been wanting to build something with that motor since it became available. I just thought it would be a crasher, not a zero mile bike. But beggars can’t be choosers, can they?

The way I look at it, it’s a great opportunity to get some publicity for a sport I love — flat track racing — while building a completely experimental and functional street legal race bike. My big concern is keeping the tires on it.

HFL: Who's terrible idea was this?

Roland: My friend Justyn, he is a complete nut. He’s has one of the largest collections of vintage motocross bikes in country along with three Desmos, so he figured he would sacrifice one to the knife. Most people would think anyone who would cut up a Desmo is just another rich asshole. Truth is, Justyn just doesn’t give a fuck. He’s one of the most charitable people I know and God thought he deserved a ridiculously fast Dirttracker. God Bless him.

HFL: Will it really be able to work as a tracker? Any better or worse than existing trackers?

Roland: It will be a fully functional Dirtrack racer with proper geometry, seating position, bar height, gearing, suspension, the whole nine. I’m patterning it off an existing XR750 silhouette.  I don’t want to say it’s going to work better then what exists today. I’m a racer so I understand the development time and energy put into every machine that’s on the grid at a Flat Track National. Then again, it doesn’t mean we won’t try to make it the best possible flat tracker we can. There is an absolute dark art to dirt track racing. I’ve grown up around it my entire life. Seems like I’ve been going to flat track as long as I’ve been alive. My dad was always  really involved in the wheel and brake side of things and I designed the current Y-spoke billet wheel being run by most of the top factory teams. It’s a crazy 8-lug knock-off wheel. It’s pretty bitchin’ and super lightweight.

HFL: What modifications do you plan to make?

Roland: All new aluminum sheetmetal, subframe, radiator shrouds, offset triples, single sided swingarm, offset custom spoke 19” wheels and hubs, Goodyears,  high bars, all custom Ti exhaust. Whatever else we can throw at it. We run across new things every day. The name of the game with this machine is to keep it as simple as possible. We’re fighting the urge to make it more complicated. The true beauty of dirt track racers is really in their simplicity. I like to think this bike is a look at what could be a full factory 'GP Dirtrack racer.'

HFL: How will you know you've succeeded?

Roland: The current answer is that it already is if it’s getting press and people are talking about flat track racing. That’s a win to me. The long answer is when Nicky Hayden rides it at the Indy Mile later this year, gets off it and say, ‘Damn, that thing really works, I’ll take one.’ Well see if we finish it in time.

Look for the finished bike here on HFL in a couple weeks.