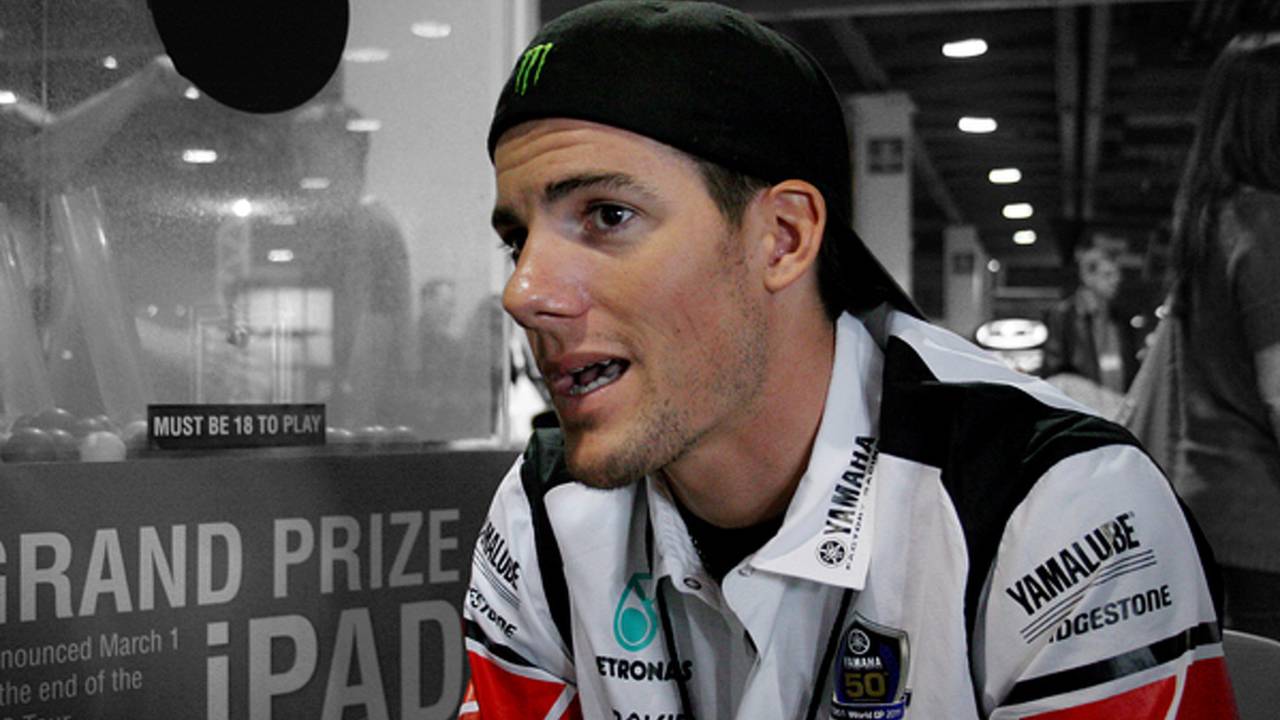 “Switching from an 800 to a 1,000cc Yamaha is just like riding a big v-twin compared to an inline-four,” describes factory Yamaha rider Ben Spies. “It feels slower and smoother, but they’ve got so much more torque that it ends up being faster.” On Friday, Grant, Sean and I sat down for a frank discussion about next season with the Texan rider. Ben’s entering his third season in MotoG...

“Switching from an 800 to a 1,000cc Yamaha is just like riding a big v-twin compared to an inline-four,” describes factory Yamaha rider Ben Spies. “It feels slower and smoother, but they’ve got so much more torque that it ends up being faster.”

On Friday, Grant, Sean and I sat down for a frank discussion about next season with the Texan rider. Ben’s entering his third season in MotoGP and second with the factory team at the same time as the bikes are radically changing. Could this be his chance?

“2012 will be the first year in a long time that I haven’t changed teams. Changing from World Superbikes to Tech3 to the factory team, it’s been a while since everything was going to be the same. I’m looking forward to that and just knowing the series a little more.”

“The first year in MotoGP, the goal was to learn. The second year, the goal was to win a race and get some podiums and we did that. Now, going in every weekend we need to be challenging for the podium. It’s my third season in MotoGP and, if we’re going to do anything special, we need to start focussing on trying to be the best.”

“With the one thousands coming along, a lot of changes are going to happen, even now we’re seeing that. The bikes are going to be pretty similar to the 800s on how they handle, but now they’ve got the torque to get out of the corner. Where a lot of times on the 800 you couldn’t make a pass because you didn’t have the drive out, with the 1,000 it should just open up more passing because you have the power to get you out of the corner. The 800 just didn’t have enough torque; if you lost momentum, you just couldn’t get it back. The 1,000 will help with that. Hopefully, being a bigger guy, there won’t be such a disadvantage like there was being on the 800 either.”

“At the tighter tracks, we’ll maybe need to muscle them more than before. I dunno, it’s one of those things we really have to wait to understand and ride them more to see. They’ve definitely got a lot more power and what I’ve felt is that they’re a little more physical to ride, but I mean they’re more fun that way too.”

“The bigger engines basically add low-end grunt. But, they’ve still got all the electronics that made the 800s so rideable. It’s kinda strange, they’re pretty tame feeling with all the sophistication now. Real smooth until you hit the straightaway.”

“The wheelie control and all that stuff is working just like it does on the 800, but you do feel an advantage when you’re up in 4th and 5th gear and how hard it’s still pulling. Getting on the throttle and out of corners, they’re very rideable, but it’s a fine line not putting too much electronics in to where you’re slowing the bike down. You’ve got to try and keep the edge.”

“Running the same size fuel tanks as the 800s, we’re going to have to keep fuel economy in mind. You can’t be running 100 percent throttle the whole time now. That’s something that surprised us. So, now we need to play around and do a little more with the electronics to save on fuel.”

“Thinking about fuel, you can’t use some of the stuff you want to and you have to change the way the bike is to get it through the whole race. Who knows, maybe that’ll enable us to make the bike even easier to ride.”

“Some riders try to pretend that they’re too smart. They try to pretend that they have degrees and all this different stuff on making a motorcycle. But, the best test riders are the ones that just come in and say what the bike is doing. I’m a rider and my job is to go the fastest I can on the track and, when I come in, say what I’m struggling with. Not come in and tell them, ‘change this or that or 10 percent stiffer swingarm.’ You just tell them exactly what the bike’s doing and the engineers figure it out. It’s their job to make the decisions.”

“The first couple of tests we’ve had on them, Yamaha’s got them fast already and super, super smooth. But, we’re still trying to close the gap with the Hondas.”

“Honda is the benchmark this year. They have to be after their performance. But that’s down to Casey too, he’s pretty incredible. They had never won an 800cc title before, so they poured a bunch of money in the off-season into their bike and we didn’t. Hopefully Yamaha was concentrating on the 1,000.”

“Honda had a great bike and Casey rode the hell out of it. It was the whole package, there wasn’t one thing, like the gearbox, that made it. Danny and Casey and the bike were just the whole package. They made it tough, we were looking at lap times we had one last year on the Yamaha — basically the same motorcycle — and races that Jorge had won by six seconds last year, I was doing the same time this year. We were definitely on the limit, but we need to work on it and get better.”

“I lost my best friend and teammate when I was 14, so I already knew that racing was dangerous. Simoncelli’s death was horrible, but sometimes it happens. It’s just one of those things with racing, we all know it can happen.”

“This year, a lot of the races were boring for me, even when I got on the podium. I could see 2nd place in front of me and 1st place in front of him and a four-second gap between all of us. Hopefully the 1,000s will make for more passing and make better racing for the fans. Hopefully it’ll be better TV, but also more fun; it’s no fun when you’re racing by yourself. The riders want good racing too.”