Marc Marquez: Domination To The Power Of Ten 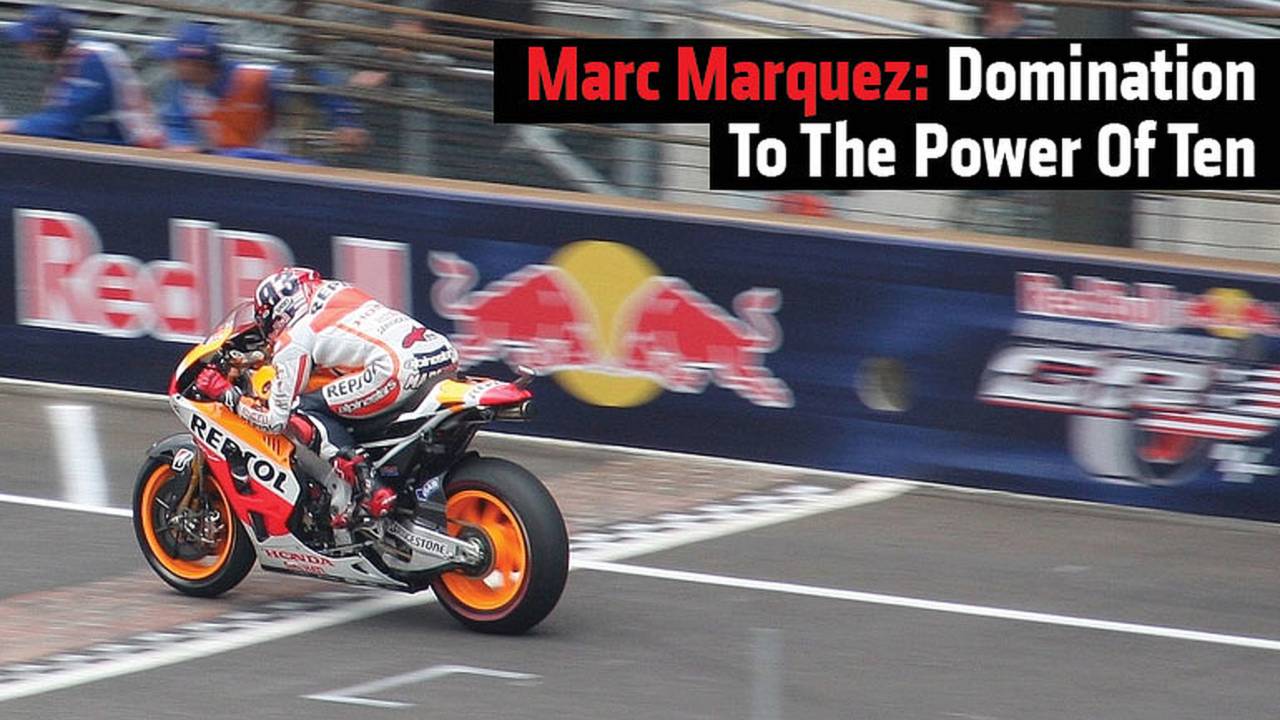 A recap of this weekend's MotoGP action at the Red Bull Indianapolis Gran Prix, where Spain's Marc Marquez continued his streak of perfection.

You could see it from the grandstands, plain as day: the moment when Marc Marquez decided he was going to win the race.

Even Marquez himself can't explain how he keeps doing it. (Photo by Pete Hitzeman)

For the first ten laps, we were treated to the unexpected. Valentino Rossi made a rocket start from the second row of the grid ("like Ron Haslam," he would say after the race), delighting the fans by shooting through a gap into second place at the first turn, then carving up the inside of Andrea Dovizioso in turn two. Marquez found himself shuffled back to fourth through the opening section, and did not immediately begin storming back through, as we have so often seen from him.

Rossi continued to lead for the first few laps, drawing on some of that old Rossi Sunday Magic and displaying an aggression and pace that he had not shown through the practice sessions. Dovi made a try for the lead on lap five, and Rossi's counterattack sent them both wide, and Marquez into the lead.

With the way he has performed this year so far, you wouldn't be blamed for thinking the race was over at this point. But the Yamaha boys had other ideas. Rossi briefly found himself in third, but he wasn't through fighting yet, first overtaking his teammate and then exploiting a rare missed apex by Marquez to regain the lead before the end of the lap.

The lead group settled down for the next few laps, Marquez bracketed by the Movistar Yamahas of Rossi and Jorge Lorenzo. Then Lorenzo broke it all loose, squeezing inside of Marquez in turn one, and lining up his teammate for a move into turn two for the lead. Marquez had other ideas, cramming his Repsol Honda up the inside of both of them for first place, and successfully defending against Lorenzo's thrusts through turns three and four.

And that's when it happened. That's when Marc Marquez decided to win.

He hit the front and immediately put a half second gap on Rossi, then dropped the hammer. Marquez' lap times dropped into the low 1:33s and high 1:32s for most of the rest of the race. Lorenzo got past Rossi on lap 15 and gave chase, but Marquez responded with a blistering octet of laps, all within two tenths of a second. Lorenzo gave everything he had, setting his three fastest times of the race in the final three laps, but there was no catching Marc.

Rossi was pleased with a podium finish, but has mixed feelings heading into Brno. (Photo by Pete Hitzeman)

Marquez' lead in the championship is now an incomprehensible 89 points, which means he could take a vacation until the end of September and still walk into the pits at Aragon with the points lead. He continues to shred every page in the record books, this weekend matching Giacomo Agostini and Mick Doohan for most consecutive wins in a season.

His domination this year would be boring, if it wasn't so astonishing. He's winning in every imaginable fashion, in every conceivable circumstance. Even he doesn't quite understand how his winning streak continues to stay alive.

"I cannot explain," he said after taking his tenth consecutive victory. "Every race, I go to the weekend and I say okay, here maybe is the time to finish second or third. Here will be the time that I struggle. But every race I feel so very strong."

In the post-race press conference, the looks on the faces of the Yamaha men were telling. Lorenzo looked very serious, pleased enough to be nearer to victory than he has been for most of the season, but unsatisfied. Rossi was cheerful, but his fatigue from chasing his younger rivals was apparent whenever the cameras weren't pointed at him.

The light at the end of the tunnel may be growing nearer for both of them. The braking stability that Yamaha has been hunting all season seems to be coming together, Rossi is riding much like himself of old, and Lorenzo is finding his form again. Next up are two tracks, Brno and Silverstone, whose flowing layouts favor the strengths of the Yamaha chassis.

Lorenzo was all business, after the race. (Photo by Pete Hitzeman)

There were also further signs of hope for the beleaguered Ducati program, which saw its riders higher on the timesheets through practice and qualifying. Andrea Dovizioso was cheerful in interviews, happy that his team continue to make incremental improvements round by round. This weekend, it was a revised motor which gave better acceleration through the top three gears. This allowed Dovi to qualify on the front row, challenge Rossi for the lead for the first five laps, and hang onto the lead group for several laps thereafter. The Ducati still struggles with tire life, and Dovi predictably faded in the later stages, but it was a net positive on the weekend for Ducati.

The whole circus starts over again in a few days at Brno in the Czech Republic. It seems unlikely at this point that Marquez will make a mistake large enough for the Yamaha men to end his streak, but it's anyone's guess when either Rossi or Lorenzo will find a pace sufficient to steal a victory outright. Until either of those things happen, the world can only stand by in awe of the historic season we are witnessing.

Marquez' special helmet for the Indy GP. The cartoon is of Kevin Clark, flamboyant flag man at the Indy Mile. (Photo by Pete Hitzeman)