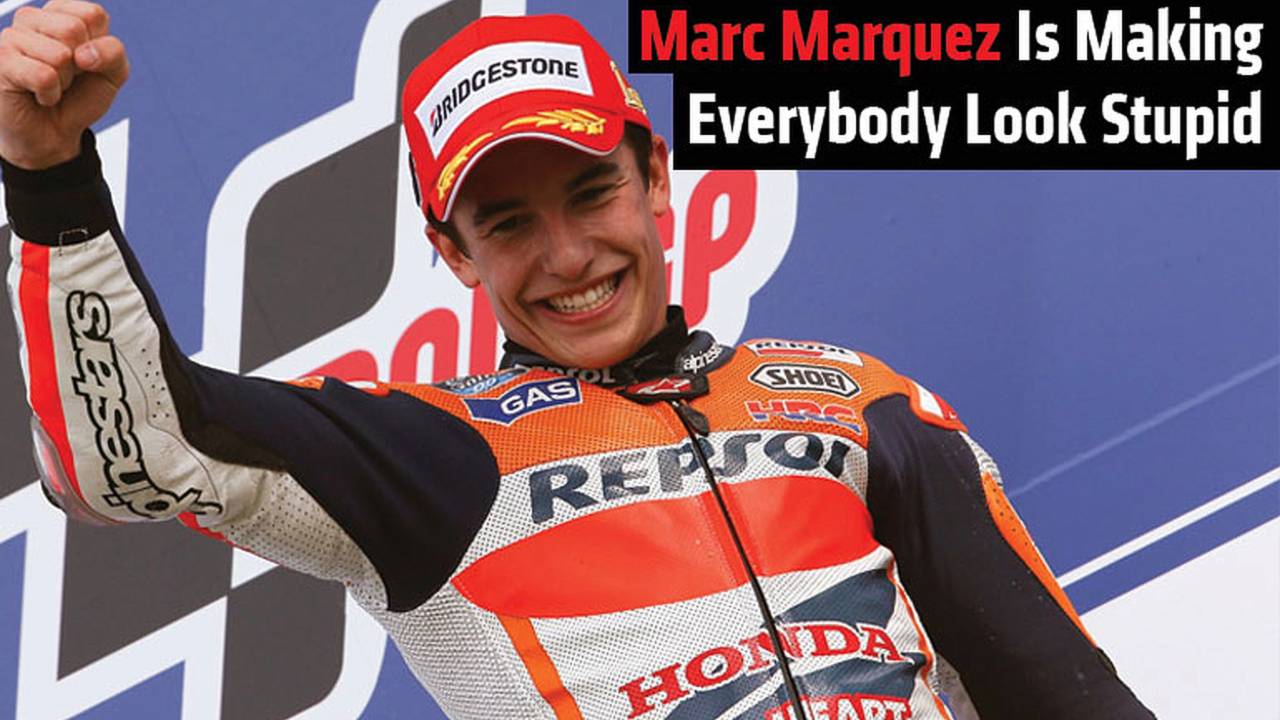 Marc Marquez has secured is sixth consecutive first place finish in this year's MotoGP. Making the entire field of champions look stupid in the process.

What superlatives haven’t been used to describe the 21 year old Spaniard? His career to date has left motorcycle racing journalists scrambling for their thesauruses in a vain attempt to describe the imperious way he has taken on the fastest riders in the world, and systematically destroyed them.

Last season, all the experts figured he would do well, win a few races, but otherwise get his clock cleaned by a supremely talented field. We all thought he’d have a rookie season much like Jorge Lorenzo did in 2008, when the latter’s brilliant talent was plain to see, but he crashed his brains out on more than one occasion. The conventional wisdom was that to beat Lorenzo, who has since become the model of consistent, mechanical efficiency on the track, a rider would have to play his game.

Marquez doesn’t subscribe to conventional wisdom, or heed the experts. He stood on the podium in all but two of the eighteen rounds of the 2013 season, collecting six victories en route to winning the championship. In doing so, he became the first rookie to win the premier class since Kenny Roberts in 1978, and dethroned Freddy Spencer as the youngest ever top category world champion. His sixteen podiums tied riders with names like Valentino Rossi, Casey Stoner and Lorenzo for most in a single season.

I mentioned it was his rookie year, right?

He can win all alone, from the front, as he has done at the Circuit of the Americas and Jerez. He can win despite mistakes and poor starts, as he did at Argentina and Le Mans. He can win in a fight, as he did at Qatar against Rossi, this past weekend at Mugello, where he battled a determined Lorenzo for the final several laps before beating him to the line by a tenth. He’s won all six races so far this season. He wins in qualifying, having taken all six pole positions. He even wins in testing, posting the fastest times at the Jerez post-race test. In his 24 MotoGP starts to date, he’s been on pole 15 times (63%), finished on the podium 22 times (92%), and won the race 12 times (50%).

(All that, and to hear him tell it, his younger brother Alex is faster. What?!)

If the combined grids of MotoGP, Moto2, Moto3, World Superbike and several national championships all sat down to breakfast simultaneously, the smart money would be on Marquez finishing his eggs and bacon first.

And he’s having fun all the while, as his broad smile on the podium and almost giddy post-race interviews show. It’s as if the gravity of what he’s doing to the fastest riders in the world hasn’t dawned on him. He’s just out there having fun, like you and I would at a track day, except his track days involve 250 horsepower motorcycles and the best tracks on the planet. His youth and relative inexperience has become an asset, as he has not yet learned that you simply can’t do what he does on a motorcycle and get away with it.

To say he’s the best rider we have ever seen in world championship motorcycle racing begs for comparison, but the problem is that no one compares. Rossi has had seasons of similar dominance (2002, 2003, 2005), but he was much further into his career, and achieved those seasons during a time of less parity at the front of the field. Perhaps we should look to another dominant Repsol Honda rider, Mick Doohan, who owned the 500cc championship for five consecutive seasons (1994-1998). If that’s what the future holds for Marquez, the other riders may want to take up another sport. Badminton, maybe.

Admittedly, he’s on the best equipment with the best team on the grid, and riding for Honda, who has never been shy of spending unimaginable sums of money on even the slightest problem to keep their riders on top. He’s able to use the current iteration of the spec Bridgestone slicks to their fullest potential, something other riders (notably Lorenzo) have struggled to do this year. But watching the way Marquez rides, you can only think that he doesn’t care much about the equipment. Like Stoner, he visibly wrings every ounce out of every bike he rides, and you’re led to believe he’d do so on any bike on the grid. And probably win, doing it.

What will stop Marquez? Nobody wins forever, but as yet there has been no visible crack in his game for other riders to exploit. Besting him in a race will probably come down to his own mistake, but it’ll have to be a hell of a mistake. And even once somebody does beat him, it may be too late for the championship. There are no guarantees in motorcycle racing, but with a 53 point lead only 1/3 of the way through the season, it’s hard to imagine how anyone will catch him.

The series heads next to Catalunya, Marquez’ home Gran Prix, where last year he stood on the podium after a late-race fracas with teammate Dani Pedrosa. One more victory would match Rossi’s best streak from 2002. The next mark would be Doohan’s ten straight in 1997. Would you put it past Marquez? You shouldn’t. It remains to be seen whether there will be any records left standing, by the time he is finished.