The winning custom bikes of the AMD World Championship 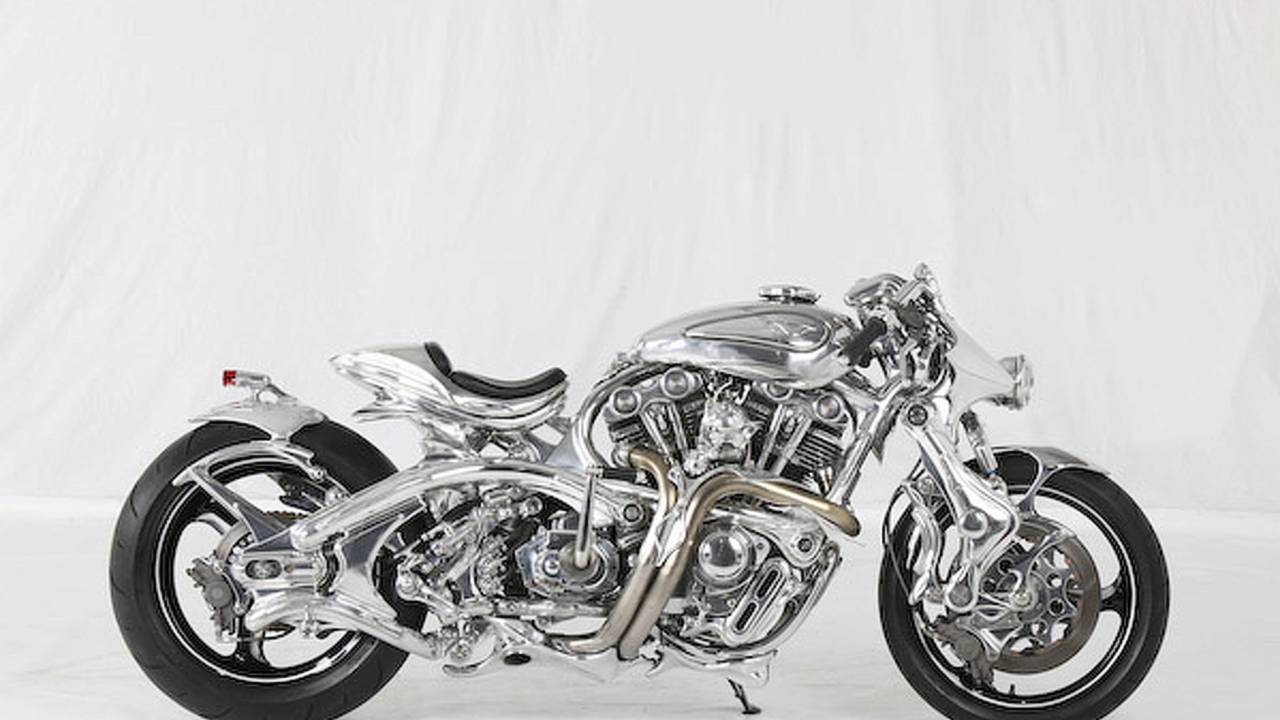 Held annually at the Sturgis assless leather chap enthusiast convention, or AssCon as fanboys like to call it, the AMD World Championship is to self conscious hillbilly art what Daytona Bike Week is to leather-skinned middle-aged strippers: Mecca. Just don’t call it that, they might think you’re a terrorist. But, mocking a reprehensible cultural appendix so it hopefully goes away aside, this y...

Held annually at the Sturgis assless leather chap enthusiast convention, or AssCon as fanboys like to call it, the AMD World Championship is to self conscious hillbilly art what Daytona Bike Week is to leather-skinned middle-aged strippers: Mecca. Just don’t call it that, they might think you’re a terrorist. But, mocking a reprehensible cultural appendix so it hopefully goes away aside, this year’s contest actually produced some neat bikes. Here’s the winners.

A ground-up custom based around an S&S v-twin, this is largely a bodywork art bike with an interesting girder/leading link/springer fork.

Using a BSA Goldstar engine, all parts on this bike were sourced from friends and eBay. The builder says, “The design ideas are probably a cross between 60s racing Hondas, FSIE Yamahas and British motorcycle heritage.” The build took over 1,400 hours, but the monetary investment was less than $9,000.

A street tracker equipped with an S&S Shovelhead motor.

This 1987 Sportster 1200 has been transformed into a Buck Rogers-style futuristic cruiser. Behind the metal bodywork is a custom tube frame, so there’s no radical monocoque or anything going on here, but check out the handmade perimeter brake discs that’re clamped by scooter calipers hidden behind the forks.

Based on an XB12, RK incorporated the fuel and oil tanks into the frame in true Buell style. Check out the solid gloss, single-sided wheels and the foldaway seat.

A frameless design that uses girder forks and incorporates the “seat” into the front subframe, bolting the swingarm to the engine case. Is that the carb for the rear cylinder sitting in the debris path for the rear wheel?

Probably the most functional bike in the contest, Sweden’s Stellan Egeland envisioned this HP2-based bike as the practical alternative to his Harrier. He says, “The intercooler for the turbo is located where the tank usally sits. The oval aluminum tubing on the top is the pressure pipe from the turbo to the intercooler, and the carbon fibre scoop is there to direct the air though the IC. Plugs for all the carbon fibre parts have been handmade from aluminum sheetmetal. The seat and cuts also serve as a fueltank and is also handmade, as is the frame and most of the parts on the bike. It is my daily rider and I have ridden it on the racetrack and it works great. It has over 150 nm of torque on the rearwheel from 4500-8500rpm, with a peak of 210nm at 5700rpm. Peak power on rearwheel is 202 hp.”

We’re guessing this is all the way down in 7th because the potbellied judges felt emasculated by three-digit power figures.

A fairly basic Harley drag bike with some silly bodywork and neat wheels. Since it’s Russian, we’ll go ahead and assume at least one component on it is either made from or covered in whale penis leather.

Now this is more like it. A Harley Panhead with a monoshock frame and girder forks. This actually looks like it’d not just be rideable, but, gasp, fun to ride too. We’d describe the style as “functional bobber.”

If you’re going to enter a contest that’s mostly about bolting crazy bodywork to a Harley motor, then you might as well add a sidecar so you can fit more art deco bodywork, right?

I wonder if Steve Iacona realizes that Roland Sands builds function into his bikes as well as looks. Neat-looking girder though.

A 1969 Honda CB750 bored to 836cc and given a basic cafe treatment. Sadly, while being ridden to Sturgis, the Rodan was rear ended by a truck, irrecoverably bending the tail unit into a silly angle, ruining any chance this bike had of being rideable.

Wow, so much going on here. A Yamaha 450 motor housed in a frame that also serves as a leaf spring for the rear suspension while the front is by a leaf-sprung girder. That seat folds away and the gas tank is a bizarre beehive-style contraption. Zany, wild, wonderful. We'll find out more.