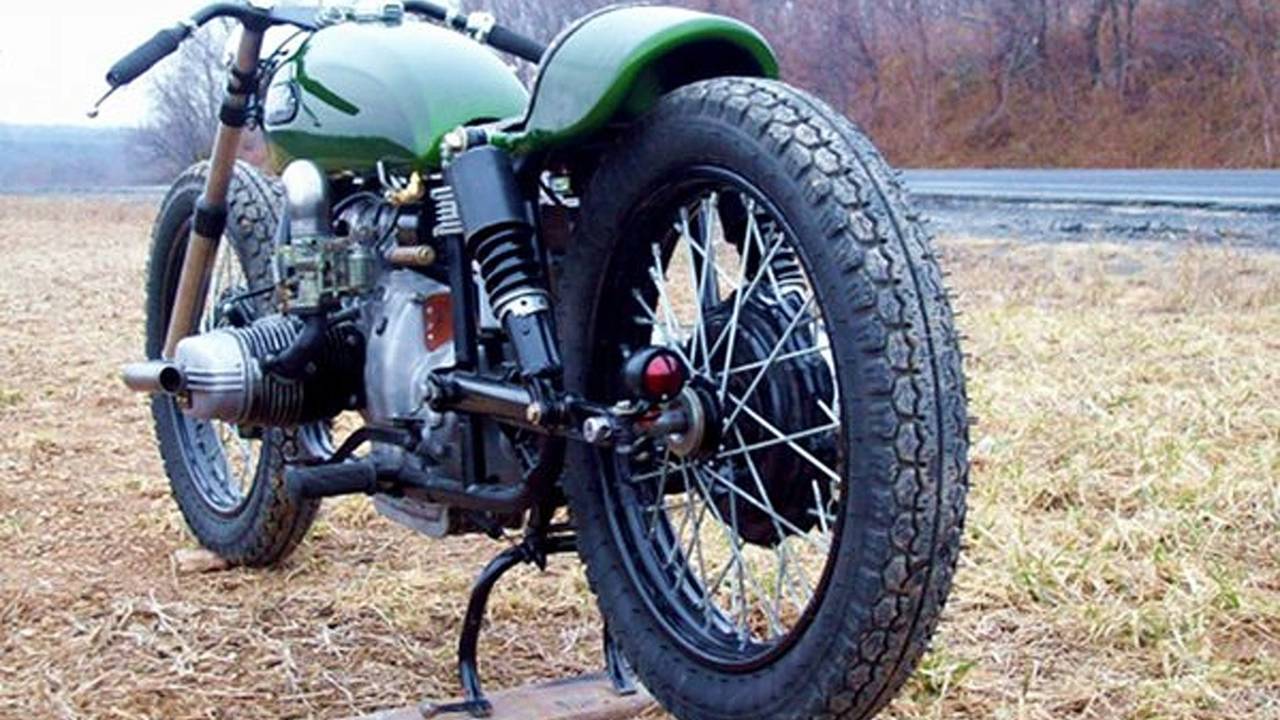 “I think I made the sleekest, sexiest Ural ever,” says Jeff Yarington of Saint Motor Company. Inspired by land speed racers and Shinya Kimura, we think he succeeded. Not bad for an $800 initial investment. Here’s Jeff’s story. Update: The Ural Racer is on eBay with a $2,000 starting bid. “A friend saw the Ural on Craigslist. 1993, 3,000 miles, $800. I’d always wanted to play with a...

“I think I made the sleekest, sexiest Ural ever,” says Jeff Yarington of Saint Motor Company. Inspired by land speed racers and Shinya Kimura, we think he succeeded. Not bad for an $800 initial investment. Here’s Jeff’s story.

“That seller bought the Ural when he was stationed in Russia. Him and three friends all went to the warehouse to pick up four bikes. They were scattered all over in no order, so they just picked out the ones they wanted, installed batteries and had the warehouse attendant write the VINs on four blank titles. Off they went. He rode it a bit in Moscow, then had it shipped to his Dad’s in Florida, then a friend’s farm in Virginia where it was stored for years. He returned from Russia via China where he bought the CJ750. The sidecar rig from the Ural was sold at some point. It’s never been titled and tagged in the 18 years it’s been here. It was showroom new when I got it.”

“I like underdogs and I have always wanted to do my take on a parallel twin since I saw Duckman’s green and white suitcase motored BMW. I was going to leave it original, but after staring at it for months, I had a vision of a low and long street racer/salt flat kind of bike. It’s such a backwards idea, a Ural racer.”

“I think I made the sleekest, sexiest Ural ever. I couldn’t say the same about my Triumph and BSA builds. I was worried about it getting zero interest, but that was totally wrong. I have built some bikes that have gotten attention, but as soon as I put pictures of this bike up I got 1,000 hits in the first two days.”

“I’ve been building bikes as a hobby under the name Saint Motorbikes for a few years. I’d build one or two each year, then showed them on the site. I gained a bit of a following, so I decided since I was now career-less and broke, I’d give an Internet store a shot, selling builder’s parts, apparel, replacement parts, etc. This has just come to life in the form of Saint Motor Company. The site is up and we are stocking it week by week.”

“A friend gave me a book called Zero Chopper Spirit, chronicling the work of Shinya Kimura. When I saw his bikes, the feel, the look, the vibe, the sould, I realized I had been wearing blinders. Motorcycles can be a canvas, they can be what ever you want. I have since befriended Shinya and Ayu and learned that they are two of the most down-to-earth, beautiful, gentle souls around.”

“My number one goal in life is to stay home with my three kids, three dogs and two cats. I want to build bikes, sell them personally and make Saint Motor Company a force in sales. You know, the American dream that rarely works. My number two goal was to be featured on Hell For Leather, so at least I can cross that one off.”

There’s 22 photos of Ural Racer hotness in this gallery.